The election of 1860 triggered the greatest challenge yet to American democracy when the elevation of Abraham Lincoln to the presidency inspired secessionists in the South to withdraw their states from the Union.

Lincoln’s election owed much to the disarray in the Democratic Party. The Dred Scott decision and the Freeport Doctrine had opened up huge sectional divisions among Democrats. Though Brown did not intend it, his raid had furthered the split between northern and southern Democrats. Southern Fire-Eaters vowed to prevent a northern Democrat, especially Illinois’s Stephen Douglas, from becoming their presidential candidate. These proslavery zealots insisted on a Democrat who directly shared their interests.

The Democratic nominating convention met in April 1860 in Charleston, South Carolina. However, it broke up after northern Democrats, who made up a majority of delegates, rejected Jefferson Davis’s efforts to protect slavery in the territories. These northern Democratic delegates knew that supporting Davis on this issue would be very unpopular among the people in their states. A second conference, held in Baltimore, further illustrated the divide within the Democratic Party. There, the party split along sectional lines. Northern Democrats nominated Douglas, and southern Democrats chose Vice President John C. Breckinridge of Kentucky as their candidate.

Stephen Douglas argued that he was the more conservative candidate, one who could save the Union by not interfering with slavery but instead letting democracy decide the issue. In their 1858 debates, Lincoln had forced Douglas to stand by his plan to let popular sovereignty decide the issue of the territorial expansion of slavery. While many in the North and West still found the policy to their liking, southerners now rejected popular sovereignty in the wake of the Dred Scott case. Thus Douglas, the favorite of northern Democrats, had lost southern support. To prevent his nomination, southern delegates bolted from the Democratic national convention, held in Charleston, South Carolina, from April 23 to May 3, 1860.

Breckinridge saw his candidacy as a matter of honor. He ran despite having almost no chance to win, because he thought it was better to lose than to accept the shame of supporting a northern candidate like Douglas. A dynamic young politician, he had a bright future ahead of him when he chose to accept the nomination of the southern Democrats. His campaign agents focused on the threat of Abraham Lincoln, whom they labeled a “Black Republican” whose election would lead to slave rebellions, tyrannical government, and even the end of the family and true religion. They painted Lincoln as a radical who would tear apart the society and culture of the United States. Sticking with the political tradition of the day, Breckinridge remained quiet throughout the election season, but he did make one speech in which he presented himself as a man of honor, a true conservative who would save the Union from Yankee radicals.

When the Republican Party met in Chicago for its convention, many thought they would nominate William Seward, a New Yorker who was pro-immigrant and had argued that a “higher law” than the Constitution—moral law—forbade slavery in the territories. Salmon P. Chase of Ohio, Edward Bates of Missouri, and Simon Cameron of Pennsylvania also all enjoyed strong support. Abraham Lincoln had his campaign agents work behind the scenes, approaching state delegations and convincing them to make him their second choice. When none of the leading candidates were able to win the nomination in the early balloting, their supporters turned to Lincoln, and he was nominated on the third ballot. Lincoln had been an obscure Springfield lawyer a few years earlier, but his debates with Stephen Douglas and a triumphant speaking tour through the Northeast had made him into a figure of national stature.

Between January 1859 and May 1860, following his failed Senate race against Douglas, Lincoln returned to his law practice in Springfield but also traveled widely, making at least 30 different speeches in eight different states. Most famously, he went to New York City and addressed students at Cooper Union in February 1860. In the lecture, Lincoln carefully explained his antislavery position, opposing the expansion of slavery into the territories. He argued that the Republican policy on slavery was the conservative position because it was closest to the view of the Founding Fathers, and that the Democrats were the radicals who threatened to destroy the nation. In keeping with tradition, however, Lincoln largely stayed out of the public eye during the presidential campaign, letting others rally the voters while he organized the effort from Springfield. 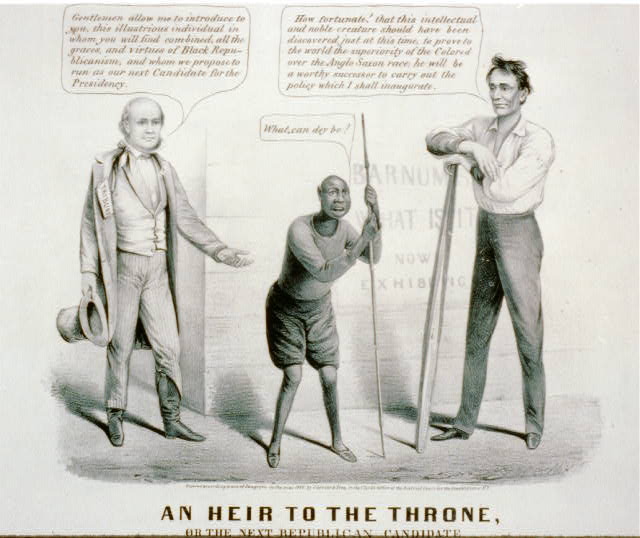 Figure 1. In this political cartoon, a man introduces an enslaved Black man as the future president, purportedly part of Lincoln’s plan to elevate the Black race above that of the Anglo-Saxons. All three of Lincoln’s opponents, as this cartoon demonstrates, attempted to conflate the Republican platform with promoting equality with Blacks and undermining opportunities for Whites. Douglas had used the same tactic in their debates two years earlier. The cartoon implies that Black equality would inevitably be followed by Blacks ruling over Whites.

Click through each slide in this activity to examine the voting data from the 1860 election.

The election became a mostly sectional contest, with Lincoln and Douglas vying for votes in the North, and Bell and Breckinridge competing in the South. By offering two candidates for president, the Democrats gave the Republicans an enormous advantage. Also hoping to prevent a Republican victory, pro-Unionists from the border states organized the Constitutional Union Party and put up a fourth candidate, John Bell, for president, who pledged to restore the earlier spirit of compromise and preserve the Union but never fully explained how he’d accomplish this objective.

In the November election, 81.2 percent came out to vote—at that point the highest ever for a presidential election. Lincoln garnered a mere 40 percent of the popular vote, though he won every northern state except New Jersey. (Since the Republican platform prohibited the expansion of slavery in future western states, all future Confederate states, with the exception of Virginia, had excluded Lincoln’s name from their ballots.) Yet by carrying those populous northern states, Lincoln handily earned a majority in the Electoral College, with 180 votes. Lincoln was trailed by Breckinridge with his 72 electoral votes, carrying eleven of the fifteen slave states; Bell came in third with 39 electoral votes; and Douglas came in last, only able to garner 12 electoral votes despite carrying almost 30 percent of the popular vote.

The Fire-Eaters, however, refused to accept the results. With South Carolina leading the way, Fire-Eaters in southern states began to withdraw formally from the United States in 1860. South Carolinian Mary Boykin Chesnut wrote in her diary about the reaction to Lincoln’s election. “Now that the Black radical Republicans have the power,” she wrote, “I suppose they will Brown us all.” Her statement revealed many southerners’ fear that with Lincoln as President, the South could expect more lawlessness like the John Brown raid.

This video summarizes the election of 1860 and the events leading to the sectional crisis and, eventually, the Civil War.

You can view the transcript for “The Election of 1860 & the Road to Disunion: Crash Course US History #18” here (opens in new window).