The Louisiana Purchase and Exploring the West

Jefferson, who wanted to expand the United States to bring about his “empire of liberty,” realized his greatest triumph in 1803 when the United States bought the Louisiana territory from France. For $15 million—a bargain price, considering the amount of land involved—the United States doubled in size. Perhaps the greatest real estate deal in American history, the Louisiana Purchase greatly enhanced the Jeffersonian vision of the United States as an agrarian republic in which yeomen farmers worked the land. Jefferson also wanted to bolster trade in the West, seeing the port of New Orleans and the Mississippi River (then the western boundary of the United States) as crucial to American agricultural commerce. In his mind, farmers would send their produce down the Mississippi River to New Orleans, where it would be sold to European traders.

The purchase of Louisiana came about largely because of circumstances beyond Jefferson’s control, though he certainly recognized the implications of the transaction. Until 1801, Spain had controlled New Orleans and had given the United States the right to traffic goods in the port without paying customs duties. That year, however, the Spanish ceded Louisiana (and New Orleans) to France. In 1802, the United States lost its right to free trade through the port, causing outrage among many, some of whom called for war with France.

Jefferson instructed Robert Livingston, the American envoy to France, to secure access to New Orleans, sending James Monroe to France to add additional pressure. The timing proved advantageous. Because enslaved Blacks in the French colony of Haiti had successfully overthrown the brutal plantation regime, Napoleon could no longer hope to restore the empire lost with France’s defeat in the French and Indian War (1754–1763). His vision of Louisiana and the Mississippi Valley as the source for food for Haiti, the most profitable sugar island in the world, had failed. The emperor therefore agreed to the sale in early 1803.

Explore the collected maps and documents relating to the Louisiana Purchase and its history at the Library of Congress site.

The true extent of the United States’ new territory remained unknown. Would it provide the long-sought quick access to Asian markets? Geographical knowledge was limited; indeed, no one knew precisely what lay to the west or how long it took to travel from the Mississippi to the Pacific. Jefferson selected two fellow Virginians, Meriwether Lewis and William Clark, to lead an expedition to the new western lands. Their purpose was to discover the commercial possibilities of the new land and, most importantly, potential trade routes. From 1804 to 1806, Lewis and Clark traversed the West.

The Louisiana Purchase helped Jefferson win reelection in 1804 by a landslide. Of 176 electoral votes cast, all but 14 were in his favor. The great expansion of the United States did have its critics, however, especially northerners who feared the addition of more slave states and a corresponding lack of representation of their interests in the North. And under a strict interpretation of the Constitution, it remained unclear whether the president had the power to add territory in this fashion. But the vast majority of citizens cheered the increase in the size of the republic. For enslavers, new western lands would be a boon; for enslaved persons, the Louisiana Purchase threatened to entrench their suffering.

To head the expedition into the Louisiana territory, Jefferson appointed his friend and personal secretary, twenty-nine-year-old army captain Meriwether Lewis, who was instructed to form a Corps of Discovery. Lewis in turn selected William Clark, who had once been his commanding officer, to help him lead the group.

Jefferson wanted to improve the ability of American merchants to access the ports of China. Establishing a river route from the Mississippi River to the Pacific Ocean, the fabled Northwest Passage, was crucial to capturing a portion of the fur trade that had proven so profitable to Great Britain. He also wanted to legitimize American claims to the land against rivals, such as Great Britain and Spain. Lewis and Clark were thus instructed to map the territory through which they would pass and to explore all tributaries of the Missouri River. This part of the expedition struck fear into Spanish officials, who believed that Lewis and Clark would encroach on New Mexico, the northern part of New Spain. Spain dispatched four unsuccessful expeditions from Santa Fe to intercept the explorers. Lewis and Clark also had directives to establish friendly relationships with the western tribes, introducing them to American trade goods and encouraging warring groups to make peace. Establishing an overland route to the Pacific would bolster U.S. claims to the Pacific Northwest, first established in 1792 when Captain Robert Gray sailed his ship Columbia into the mouth of the river that now bears his vessel’s name and forms the present-day border between Oregon and Washington. Finally, Jefferson, who had a keen interest in science and nature, ordered Lewis and Clark to take extensive notes on the geography, plant life, animals, and natural resources of the region into which they would journey.

After spending the winter of 1803–1804 encamped at the mouth of the Missouri River while the men prepared for their expedition, the corps set off in May 1804. Although the thirty-three frontiersmen, boatmen, and hunters took with them Alexander Mackenzie’s account of his explorations and the best maps they could find, they did not have any real understanding of the difficulties they would face. Fierce storms left them drenched and freezing. Enormous clouds of gnats and mosquitos swarmed about their heads as they made their way up the Missouri River. Along the way they encountered (and killed) a variety of animals including elk, buffalo, and grizzly bears. One member of the expedition survived a rattlesnake bite. As the men collected minerals and specimens of plants and animals, the overly curious Lewis sampled minerals by tasting them and became seriously ill at one point. What they did not collect, they sketched and documented in the journals they kept. They also noted the customs of the Indian tribes who controlled the land and attempted to establish peaceful relationships with them in order to ensure that future White settlement would not be impeded.

Read the journals of Lewis and Clark on the University of Nebraska–Lincoln website, which also has footnotes, maps, and commentary. According to their writings, what challenges did the explorers confront?

Watch this video for an overview of the Lewis and Clark expedition.

The corps spent their first winter in the wilderness, 1804–1805, in a Mandan village in what is now North Dakota. There they encountered a reminder of France’s former vast North American empire when they met a French fur trapper named Toussaint Charbonneau. When the corps left in the spring of 1805, Charbonneau accompanied them as a guide and interpreter, bringing his teenage Shoshone wife, Sacagawea, and their newborn son. Charbonneau knew the land better than the Americans, and Sacagawea proved invaluable in many ways, not least of which was that the presence of a young woman and her infant convinced many groups that the men were not a war party and meant no harm.

The corps set about making friends with Native tribes while simultaneously attempting to assert American power over the territory. Hoping to overawe the people of the land, Lewis would let out a blast of his air rifle, a relatively new piece of technology the Indians had never seen. The corps also followed Native custom by distributing gifts, including shirts, ribbons, and kettles, as a sign of goodwill. The explorers presented Native leaders with medallions, many of which bore Jefferson’s image, and invited them to visit their new “ruler” in the East. These medallions or peace medals were meant to allow future explorers to identify friendly Native groups. Not all efforts to assert U.S. control went peacefully; some Indians rejected the explorers’ intrusion onto their land. An encounter with the Blackfoot turned hostile, for example, and members of the corps killed two Blackfoot men.

After spending eighteen long months on the trail and nearly starving to death in the Bitterroot Mountains of Montana, the Corps of Discovery finally reached the Pacific Ocean in 1805 and spent the winter of 1805–1806 in Oregon. They returned to St. Louis later in 1806 having lost only one man, who had died of appendicitis. Upon their return, Meriwether Lewis was named governor of the Louisiana Territory. Unfortunately, he died only three years later in circumstances that are still disputed, and before he could write a complete account of what the expedition had discovered.

Although the Corps of Discovery failed to find an all-water route to the Pacific Ocean (for none existed), it nevertheless accomplished many of the goals Jefferson had set. The men traveled across the North American continent and established relationships with many Indian tribes, paving the way for fur traders like John Jacob Astor who later established trading posts solidifying U.S. claims to Oregon. Delegates of several tribes did go to Washington to meet the president. Hundreds of plant and animal specimens were collected, several of which were named for Lewis and Clark in recognition of their efforts. And the territory was now more accurately mapped and legally claimed by the United States. Nonetheless, most of the vast territory, home to a variety of Native peoples, remained unknown to Americans.

A Selection of Hats for the Fashionable Gentleman 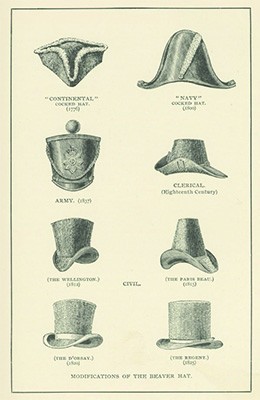 Figure 5. This illustration from Castrologia, Or, The History and Traditions of the Canadian Beaver shows a variety of beaver hat styles. Beaver pelts were also used to trim women’s bonnets.

Beaver hats were popular apparel in the eighteenth and nineteenth centuries in both Europe and the United States because they were naturally waterproof and bore a glossy sheen. Demand for beaver pelts (and for the pelts of sea otters, foxes, and martens) by hat makers, dressmakers, and tailors led many fur trappers and traders west into the wilderness following Lewis and Clark’s expedition in pursuit of riches. Beaver hats fell out of fashion in the 1850s when silk hats became the rage and beaver became harder to find. In some parts of the West, the animals had been hunted nearly to extinction.

Are there any contemporary fashions or fads that likewise promise to alter the natural world?

For what purposes did Thomas Jefferson send Lewis and Clark to explore the Louisiana Territory? What did he want them to accomplish?

Show Answer
Jefferson wanted Lewis and Clark to find an all-water route to the Pacific Ocean, strengthen U.S. claims to the Pacific Northwest by reaching it through an overland route, explore and map the territory, make note of its natural resources and wildlife, and make contact with Indian tribes with the intention of establishing trade with them.

Corps of Discovery: the group led by Meriwether Lewis and William Clark on the expedition to explore and map the territory acquired in the Louisiana Purchase

Louisiana Purchase: the U.S. purchase of the large territory of Louisiana from France in 1803