Putting It Together: Sequences and Series 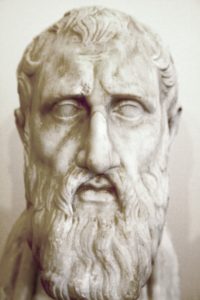 Marble bust of Zeno of Citium.

The Greek philosopher Zeno of Elea (c. 490-450 BC) described certain everyday scenarios, such as walking down a path or shooting an arrow, in ways that made them seem impossible to accomplish.  These stories are called Zeno’s Paradoxes.  The word paradox itself means self-contradictory statement, and Zeno’s original intent in telling these paradoxes was to argue that motion is somehow an illusion.  However we can use what we have learned in this module to show that there is no self-contradiction at all.

In other words, there are infinitely many halfway points to get past, and as Zeno argued, since no one can accomplish an infinite number of tasks, there is simply no way to walk the entire mile!  In fact, the same reasoning applies to any distance, no matter how short.  Motion itself seems to be impossible because the object in motion would have to pass an infinite number of halfway points before reaching its destination.

Now obviously people can and do walk various distances all the time.  Where does Zeno’s argument go wrong?  It was in his misunderstanding of an infinite series.  Let’s see what the journey looks like at each stage, adding up all of the distances in turn.  We’ll keep track of our progress on a number line.

As you can see, at every stage the total distance only grows by smaller and smaller amounts.  In fact, we are adding the terms of a geometric series whose common ratio is equal to [latex]r={\large\frac{1}{2}}[/latex].

But the process doesn’t really stop, right?  What would be the sum of infinitely many terms of the series?

Notice that the formula correctly sums the infinitely many distances that make up the full mile.  What Zeno did not realize is that an infinite series could have a finite sum!