Why It Matters: Rational And Radical Functions

Why study rational and radical functions?

When a patient undergoes major surgery, the anesthesiologist must prepare a very specific mixture of drugs that will put the patient under for a specific time period.  If the drugs are too weak, the patient might wake up in the middle of the procedure; if they are too powerful, there is a risk that the patient may not wake up at all.

The surgery patient’s health and well-being rest on the ability of the anesthesiologist to accurately and effectively administer just the right amount of medicine at the right time.  How does he or she do this?  It turns out that there is a mathematical model that describes how medicine concentration varies over time in the human body.  The formula is:

in which [latex]A[/latex] and [latex]B[/latex] are constants determined by various factors including the body weight of the individual, types of drugs used, and quantity of the drugs administered. 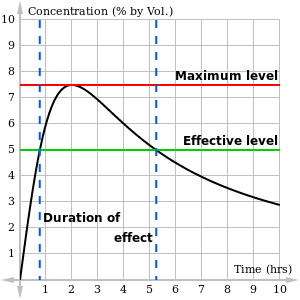 This is an example of a rational function.  The graph shown here illustrates the case in which [latex]A=30[/latex] and [latex]B=4[/latex].  The black curve is the graph of [latex]C(t)[/latex].

Suppose that a certain drug will only be effective if its concentration in the bloodstream is at least 5%.  However if the drug concentration exceeds 7.5%, then the patient may experience adverse side effects, while any amount less than 7.5% is safe.  According to the graph, the drug becomes effective at a little less than an hour from the time it was first administered and remains above the effective level until about 5 hours.  So the duration of effect is at least 4 hours total (within the time window between the two dotted blue lines).  Furthermore, this graph shows that the concentration peaks at 7.5% and then decreases, indicating the drug is safe for the patient.

In this module, you will explore how rational functions can be graphed, analyzed, and used in applications.  For example, you will learn how you can use the formula for [latex]C(t)[/latex] to precisely identify when the drug concentration reaches the effective level.  You will also be able to show that over time the drug concentration becomes insignificant.  That is, the values of [latex]C(t)[/latex] get closer to 0 as [latex]t[/latex] increases.  This is good news for the patient who probably wants to get back to his or her daily routine as soon as possible after the surgery.