Why It Matters: Solving Systems with Matrices

Why learn to solve systems with matrices?

A large order comes in for 620 chairs and 360 tables. How many days should each workshop dedicate to table and chair production in order to fulfill the order most efficiently? 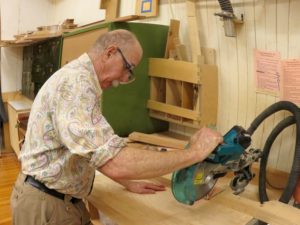 When we use the phrase most efficiently, we mean that the workshops should be operating at full capacity with no extra production. For example, if we allowed the Atlanta shop to produce all of the tables and chairs by itself, then after 34 days, there would be [latex]31\times20=620[/latex] chairs and [latex]31\times15=465[/latex] tables.  That would fulfill the order, but then there would be [latex]465-360=105[/latex] extra tables cluttering up the workshop. And if we did not make those extra 105 tables, then that would mean the workshop was not working at full capacity. In a similar way, if the Boston workshop produced the entire order, there would either be extra furniture or inefficient use of resources there.

Of course, using methods from the previous module, Systems of Equations and Inequalities, you can easily solve this system. However, every time a new order for chairs and tables comes in, you would have to solve a similar linear system again. It would be better if we had a more general method that could be used to solve the system,

in which [latex]C[/latex] and [latex]T[/latex] could be plugged in later. Fortunately, there is a straightforward method for doing exactly that. In this module, you will learn a new method for solving systems, one that uses a table of numbers called a matrix (pl. matrices), very much like the array of numbers from the initial table. The coefficient matrix for this system is:

Then you can write the system as an equation of matrices as shown below.

The methods for working with such an equation will be discussed shortly. We will revisit our thriving furniture business at the end of the module and see how matrices can be used to solve our table and chair problem once and for all.