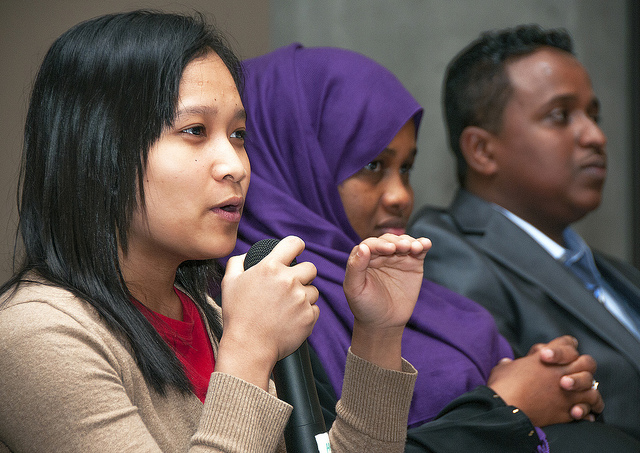 Diversity: the art of thinking independently together.

For each of us, diversity has unique meaning. Below are a few of the many definitions offered by college students at a 2010 conference on the topic of diversity. Which of these definitions rings out to you as most accurate and thoughtful? Which definitions could use some embellishment or clarification, in your opinion?

Diversity is a group of people who are different in the same place.

Diversity to me is the ability for differences to coexist together, with some type of mutual understanding or acceptance present. Acceptance of different viewpoints is key.

Anything that sets one individual apart from another.

Having a multitude of people from different backgrounds and cultures together in the same environment working for the same goals.

Differences in characteristics of humans.

Diversity is a satisfying mix of ideas, cultures, races, genders, economic statuses and other characteristics necessary for promoting growth and learning among a group.

Diversity is the immersion and comprehensive integration of various cultures, experiences, and people.

Heterogeneity brings about opportunities to share, learn and grow from the journeys of others. Without it, limitations arise and knowledge is gained in the absence of understanding.

Diversity is not tolerance for difference but inclusion of those who are not the majority. It should not be measured as a count or a fraction—that is somehow demeaning. Success at maintaining diversity would be when we no longer ask if we are diverse enough, because it has become the norm, not remarkable.[1]

Diversity means different things to different people, and it can be understood differently in different environments. In the context of your college experience, diversity generally refers to people around you who differ by race, culture, ethnicity, religion, socioeconomic status, sexual orientation, abilities, opinions, political views, and in other ways. When it comes to diversity on the college campus, we also think about how groups interact with one another, given their differences (even if they’re just perceived differences.) How do diverse populations experience and explore their relationships?

“More and more organizations define diversity really broadly,” says Eric Peterson, who works on diversity issues for the Society for Human Resource Management (SHRM). “Really, it’s any way any group of people can differ significantly from another group of people—appearance, sexual orientation, veteran status, your level in the organization. It has moved far beyond the legally protected categories that we’ve always looked at.”[2]

In the following video, students from Juniata College describe what diversity means to them and explain why it’s an important aspect of their college experience.

Surface diversity and deep diversity are categories of personal attributes—or differences in attributes—that people perceive to exist between people or groups of people.

Surface-level diversity refers to differences you can generally observe in others, like ethnicity, race, gender, age, culture, language, disability, etc. You can quickly and easily observe these features in a person. And people often do just that, making subtle judgments at the same time, which can lead to bias or discrimination. For example, if a teacher believes that older students perform better than younger students, she may give slightly higher grades to the older students than the younger students. This bias is based on perception of the attribute of age, which is surface-level diversity.

Deep-level diversity, on the other hand, reflects differences that are less visible, like personality, attitude, beliefs, and values. These attributes are generally communicated verbally and nonverbally, so they are not easily noticeable or measurable. You may not detect deep-level diversity in a classmate, for example, until you get to know him or her, at which point you may find that you are either comfortable with these deeper character levels, or perhaps not. But once you gain this deeper level of awareness, you may focus less on surface diversity. For example: At the beginning of a term, a classmate belonging to a minority ethnic group, whose native language is not English (surface diversity), may be treated differently by fellow classmates in another ethnic group. But as the term gets under way, classmates begin discovering the person’s values and beliefs (deep-level diversity), which they find they are comfortable with. The surface-level attributes of language and perhaps skin color become more “transparent” (less noticeable) as comfort is gained with deep-level attributes.

The following video is a quick summary of the differences between surface-level and deep-level diversity.

Positive Effects of Diversity in an Educational Setting

Why does diversity matter in college? It matters because when you are exposed to new ideas, viewpoints, customs, and perspectives—which invariably happens when you come in contact with diverse groups of people—you expand your frame of reference for understanding the world. Your thinking becomes more open and global. You become comfortable working and interacting with people of all nationalities. You gain a new knowledge base as you learn from people who are different from yourself. You think “harder” and more creatively. You perceive in new ways, seeing issues and problems from new angles. You can absorb and consider a wider range of options, and your values may be enriched. In short, it contributes to your education.

Consider the following facts about diversity in the United States:

All in all, diversity brings richness to relationships on campus and off campus, and it further prepares college students to thrive and work in a multicultural world. Diversity is fast becoming America’s middle name.

The idea of “accessibility” is an important force of change on college campuses today. Accessibility is about making education accessible to all, and and it’s particularly focused on providing educational support to a diverse group of students, faculty, and staff with disabilities. According to the American with Disabilities Act, you can be considered disabled if you meet one of the following criteria:

If you meet one of these criteria, you have special legal rights to certain accommodations on your campus. These accommodations may include, but are not limited to, the following:

Students in the following video share some of their experiences with the Web accessibility.

Why So Many Questions?

The following essay about experiences of diversity in college is by Fatima Rodriguez Johnson (State University of New York). Even though at first the writer felt like an ethnic outsider at college, she grew in understanding the importance of diversity of campus and of speaking openly and honestly about connecting with diverse cultures.

Why So Many Questions?

I chose to attend a small liberal arts college. The campus was predominately white and was nestled in a wealthy suburb among beautiful trees and landscaped lawns. My stepfather and I pulled into the parking lot and followed the path to my residence hall. The looks we received from most of the families made me feel like everyone knew we didn’t belong. But, he and I greeted all we encountered, smiling and saying, “Hello.” Once I was unpacked and settled into my residence hall, he gave me a hug and said, “Good luck.” I wasn’t sure if he meant good luck with classes or good luck with meeting new friends, but I heard a weight in his voice. He was worried. Had he and my mother prepared me for what was ahead?

With excitement, I greeted my roommate who I had already met through the summer Higher Educational Opportunity Program (HEOP). She and I were very happy to see each other. After decorating and organizing our room, we set out to meet new people. We went to every room introducing ourselves. We were pretty sure no one would forget us; it would be hard to miss the only Black and Latina girls whose room was next to the pay phone (yes, in my day each floor shared one pay phone).

Everyone on our floor was nice and we often hung out in each other’s rooms. And like some of you, we answered some of those annoying questions:

We were also asked questions that made us angry:

It was those questions that, depending on the day and what kind of mood we were in, made a fellow student either walk away with a better understanding of who we were as Black and Latina women or made a fellow student walk away red and confused. I guess that’s why my stepfather said, “Good luck.” He knew that I was living in a community where I would stand out—where I would have to explain who I was. Some days I was really good at answering those questions and some days I was not. I learned the questions were not the problem; it was not asking that was troubling.

My roommate and I put forth a lot of effort to fit in with the community—we spent time hanging out with our peers, we ate together almost every evening in the dining hall, and we participated in student organizations. We were invited to join the German Club, and were the only students of color there. In doing all these things we made ourselves approachable. Our peers became comfortable around us and trusted us.

Although my peers and I all had similar college stresses (tests, papers, projects, etc.) my roommate and I also had become a student resource for diversity. Not because we wanted to, but because we had too. There were very few students of color on campus, and I think students really wanted to learn about people different from themselves. It was a responsibility that we had accepted. The director of HEOP would often remind us that for many students, college was the first opportunity they had to ask these types of questions. He said we would learn to discern when people were really interested in learning about our differences or insulting us. If someone was interested in insulting us, there was no need to respond at all.

Although I transferred to another college at the end of my sophomore year, during those two years I learned a great deal about having honest conversations. Taking part in honest conversations challenged my notions of the world and how I viewed people from all walks of life (race, class, sexual orientation, ability, etc.). Those late nights studying or walks to the student center were when many of us listened to each other’s stories.

My advice is to take time to examine your attitudes and perceptions of people different from yourself, put yourself in situations that will challenge your assumptions, and lastly, when you make a mistake do not get discouraged. Keep trying. It’s easy to stay where we are comfortable. College is such a wonderful experience. Take it all in, and I am sure you will enjoy it!