Why It Matters: Linking Probability to Statistical Inference

This module introduces our study of inference. Before we begin Linking Probability to Statistical Inference, let’s look at how the remainder of the course relates to the Big Picture of Statistics.

In the Big Picture of Statistics, we are about to start the last step: Inference. We use data from a sample to “infer” something about the population in this and the upcoming modules. Inference is based on probability. 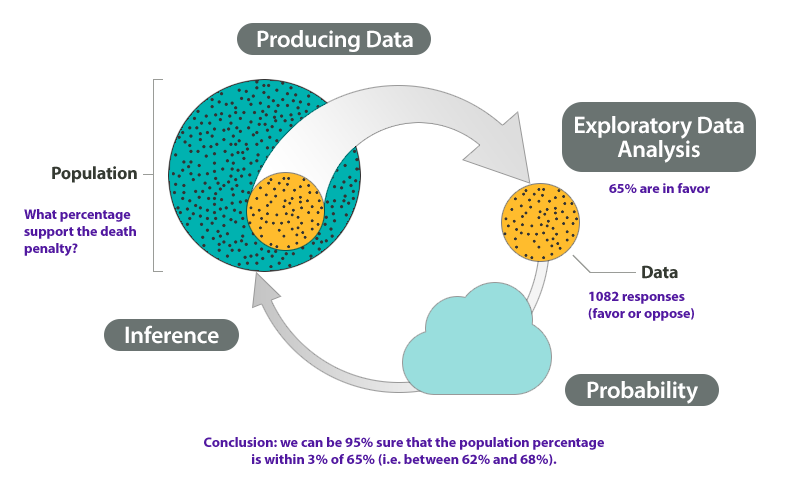 We illustrated the Big Picture of Statistics with an example about an inference made from survey data. From a random sample of U.S. adults, we estimated the percentage of all U.S. adults who support the death penalty. We saw that probability describes the likelihood that an estimate is within 3% of the true percentage with this opinion in the population. For this example, there is a 95% chance that a random sample is within 3% of the true population percentage.

How can a prosecutor use data to detect cheating? The details of this case appeared in Chance magazine in 1991.

The Evidence: At the trial, the prosecution introduced evidence based on data. Here is the evidence: On the 16 questions missed by both Student A and Student C, 13 of the answers were the same.

The Argument: The prosecutor used the data to draw an inference based on probability. He asked the question: Could 13 out of 16 matches be due to chance? He argued that a match of 13 out of 16 by chance alone was very unlikely. The probability of this occurring is very small. So there had to be another explanation besides chance, and the prosecutor said the explanation was cheating. Based on this evidence, Student C was found guilty of academic dishonesty.

The Role of Random Chance: To decide if we agree with this argument, we need to understand if chance might explain this result. We need to determine if it would be unusual to get 13 matches on 16 questions by chance alone. To determine if 13 out of 16 is unusual, we have to look at what happens in the long run if students just guess on 16 multiple choice questions.

Let’s assume that each question had four options: a, b, c, or d. We use a computer program to randomly assign answers to each question, which mimics what happens when someone randomly guesses. Using software to imitate chance behavior is called simulation. 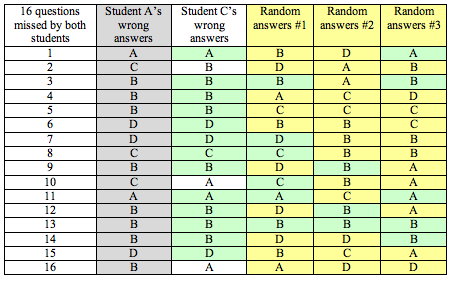 For the random answers generated by “guessing,” we see the proportion of matches differs:

Is Student C unusual? Yes. Notice that no randomly generated set of answers comes close to the proportion of matches on Student C’s exam. A proportion of 0.8125 would be very unusual if guessing, so we conclude that Student C was not guessing.

Conclusion: The prosecution argued that a match of 13 out of 16 wrong answers (a proportion of 0.8125) was unusual and could not be explained by random chance. Our simulation agrees with this observation. When we created answer sets by randomly guessing, we never saw more than 9 matches out of 16, which is a proportion of 0.5625. We agree with the prosecution that there has to be another explanation besides chance.

However, could there be another explanation besides cheating?

Yes. If you don’t know the answer to a question on an exam, you rarely guess at random. It is more likely that you will make an educated guess. Some wrong answers might be more logical than others. This could also explain the large proportion of matches on wrong answers between the two students. So this evidence is not convincing evidence that Student C cheated, but we know that he did not just guess.

Student C appealed his case. A second trial was held. This time the prosecution made a different argument using data. This argument did not use statistical inference.

Analysis: There were 88 students. Here are the results:

Each dot represents a student who took the exam. A dot with a proportion of 0.6 means that 60% of this student’s answers matched Student A’s answers.

Note: Student A is included in the data. Of course, Student A is the dot with the proportion of 40 out of 40 = 1.0 This makes sense because all of Student A’s answers matched Student A. (This does not mean that Student A did well on the exam.)

Student C had 32 matches out of 40, which is a proportion of 0.80. (This does not mean that Student C made an 80% on the exam. It means that 80% of Student C’s answers matched Student A’s answers.) Student C is once again an unusual data point.

Conclusion: This time it is harder to argue that Student C is not cheating. When we compare him to the rest of the class, his paper had an unusually high number of matches with Student A’s answers. This data together with the proctor’s testimony is fairly convincing evidence for the prosecution’s claim that Student C cheated by copying from Student A’s paper.

Statistical inference always involves an argument based on probability.

In this court case, the prosecution used two different types of arguments to provide evidence of cheating. The first argument is an example of statistical inference because it is based on probability. We set up a simulation to reflect an assumption that the prosecutor made. The assumption is that answer sets come from random guessing. We simulated over a thousand answer sets with randomly chosen answers to investigate the long-run behavior of simulated answer sets. We then compared Student C to the distribution of randomly generated answer sets. Student C was unusual. We concluded that Student C was not randomly guessing.

The second argument is an example of exploratory data analysis with no statistical inference. The prosecutor designed a measurement and collected data from every student in the class. He compared Student C’s measurement to the measurements of the other students. Probability did not have a role in this analysis. Probability statements require a random event and a look at long-run behavior of random events, so this is not an example of statistical inference.

The court case illustrates how we can view statistical inference as an argument based on probability. Here we briefly connect the probability argument with the vocabulary and ideas from the module Probability and Probability Distribution.

Recall the following important points about probability that we learned in that module:

How does this logic relate to the Big Picture?

This logic is similar to the logic of inference that we explore in future modules, where we randomly select samples from a population. We continue to use computer simulation throughout these modules to analyze the long-run pattern that emerges in measurements from random samples. We create probability models that tell us how much variability to expect in random samples. We also use these models to identify unusual measurements. From the patterns, we use data to make judgments about the population. In this way, our conclusions about a population are based on probability.

Probability and Probability Distribution included a long discussion of probability models that are normal curves. Under certain conditions, the long-run behavior of measurements from random samples can be modeled with a normal curve (or a similar curve), we see in this module and in Inference for One Proportion, Inference for Two Proportions, and Inference for Means. In each module, we ask the question, When can we use a normal model? Once we know these conditions, we can use what we learned in the previous module to make probability-based decisions about population values.

Here we add these ideas to the Big Picture to show how probability connects to inference. 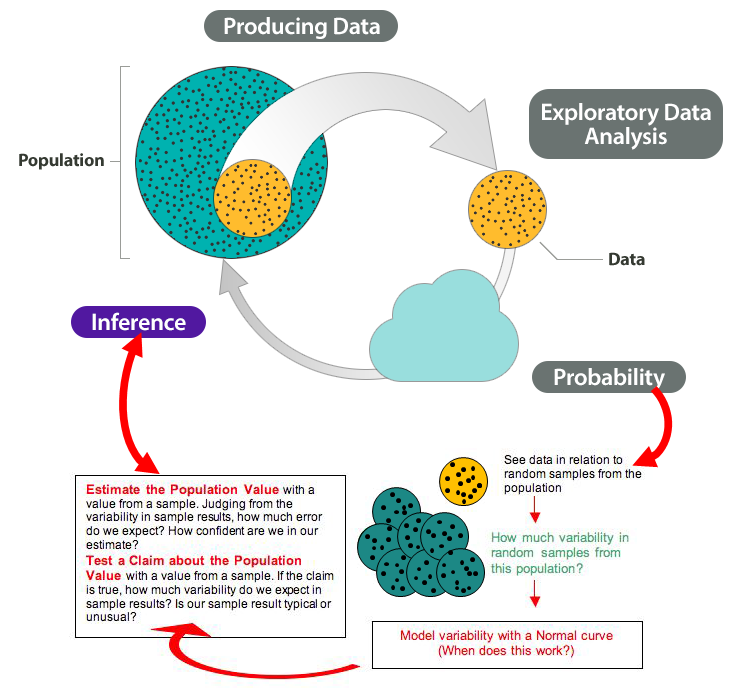 Note that we highlighted two types of inference in the diagram:

Note: Each research question relates to either a categorical variable or a quantitative variable. In this course, three criteria determine the inference procedure we use: