The Expenditure Approach: GDP Measured by Components of Demand

If we know that GDP is the measurement of everything that is produced, we should also ask the question, who buys all of this production? This demand can be divided into four main parts:

What is meant by the term “Investment”?

What do economists mean by investment, or investment expenditure? In calculating GDP, investment does not refer to the purchase of stocks and bonds or the trading of financial assets. It refers to the purchase of new capital goods, that is, business equipment, new commercial real estate (such as buildings, factories, and stores), residential housing construction, and inventories. Inventories that are produced this year are included in this year’s GDP—even if they have not yet sold. From the accountant’s perspective, it is as if the firm invested in its own inventories. Business investment in 2012 was over $2 trillion, according to the U.S. Bureau of Economic Analysis.

Table 1 shows how these four components of demand added up to the GDP in 2016.

Figure 1 provides a visual representation of the five categories used to measure GDP by the components of demand. 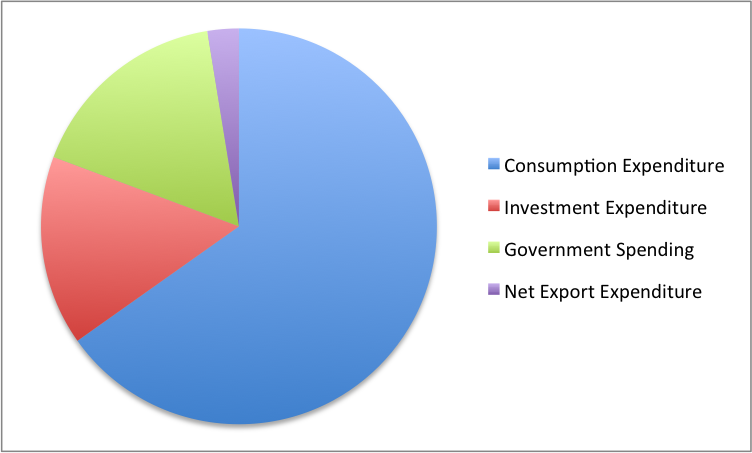 Figure 1. Components of U.S. GDP. Consumption accounted for 68.7% of total GDP, investment expenditure for 16.3%, government spending for 17.6%, while net exports (exports minus imports) actually subtracted 2.7% from total GDP. The pie chart gives a nice visual of the components of GDP, but keep in mind that since the net export expenditure share is negative, the size of the pie is only approximately correct.

Figure 2(a) shows the levels of consumption, investment, and government purchases over time, expressed as a percentage of GDP. Consumption expenditure, that is, spending by households and individuals, is about two-thirds of GDP, but it moves relatively little over time. Investment expenditure and government spending on goods and services are each about the same order of magnitude, 15-20% of GDP.  Investment is the most variable category of expenditure, increasing and decreasing more than the other categories.  Figure 2(b) shows the levels of exports and imports as a percentage of GDP over time. Exports are added to total demand for goods and services, while imports are subtracted from total demand. If exports exceed imports, as in most of the 1960s and 1970s in the U.S. economy, a trade surplus exists. If imports exceed exports, as in recent years, then a trade deficit exists.

Components of GDP on the Demand Side

Let’s take a closer look at these components of demand:

Since the early 1980s, imports have typically exceeded exports, and so the United States has experienced a trade deficit in most years. Despite growth in the trade deficit in the late 1990s and in the mid-2000s, the deficit typical remains less than 5% of GDP. Figure 2(b) also shows that imports and exports have both risen substantially in recent decades, even after the declines during the Great Recession between 2008 and 2009. As noted before, if exports and imports are equal, foreign trade has no effect on total GDP. However, even if exports and imports are balanced overall, foreign trade might still have powerful effects on particular industries and workers by causing nations to shift workers and physical capital investment toward one industry rather than another.

Based on these four components of demand, GDP can be measured as:

Understanding how to measure GDP is important for analyzing connections in the macro economy and for thinking about macroeconomic policy tools.

How do Statisticians Measure GDP?

Government economists at the Bureau of Economic Analysis (BEA), within the U.S. Department of Commerce, construct estimates of GDP from a variety of sources.

All of these bits and pieces of information arrive in different forms, at different time intervals. The BEA melds them together to produce estimates of GDP on a quarterly basis (every three months). These numbers are then “annualized” by multiplying by four. That is, quarterly GDP estimates what annual GDP would be if the trend over the three months continued for twelve months. As more information comes in, these estimates are updated and revised. The “advance” estimate of GDP for a certain quarter is released one month after a quarter. The “preliminary” estimate comes out one month after that. The “final” estimate is published one month later, but it is not actually final. In July, roughly updated estimates for the previous calendar year are released. Then, once every five years, after the results of the latest detailed five-year business census have been processed, the BEA revises all of the past estimates of GDP according to the newest methods and data, going all the way back to 1929. Visit this website to read FAQs on the BEA site. You can even email your own questions!

GDP Measured by Type of Product

The Expenditure Approach divides GDP based on who is doing the spending: Consumption (households), Investment (businesses and households), Government Spending (governments) and Net Exports (the rest of the world).

GDP can also be measured by examining what is produced, instead of what is demanded. Everything that is purchased must be produced first. Table 2 breaks down GDP a different way, based on the type of output produced: durable goods, nondurable goods, services, structures, and the change in inventories.

Consumer Expenditure (from the expenditure approach you read about above) consists of spending on durable goods, nondurable goods, and services. The same thing is true of Government and Net Export Expenditures. Investment Expenditures is a combination of durable goods (like business equipment) and structures e.g. factories, office buildings, retail stores and residential construction).

Figure 3 provides a visual representation of the five categories used to measure GDP by type of product. 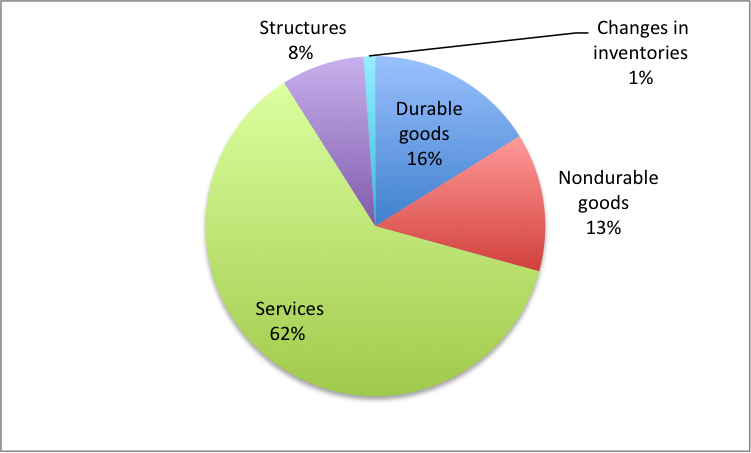 Note that whether you decompose GDP into expenditure components or by type of product the total is exactly the same. Figure 4 shows the components of GDP by Type of Product, expressed as a percentage of GDP, since 1960. Services are the largest single component of GDP, representing over half. Nondurable goods used to be larger than durable goods, but in recent years, nondurable goods have been dropping closer to durable goods, which is about 15% of GDP. Structures hover around 10% of GDP, though they’ve been declining in recent years. The change in inventories, the final component of aggregate supply, is not shown here; it is typically less than 1% of GDP. 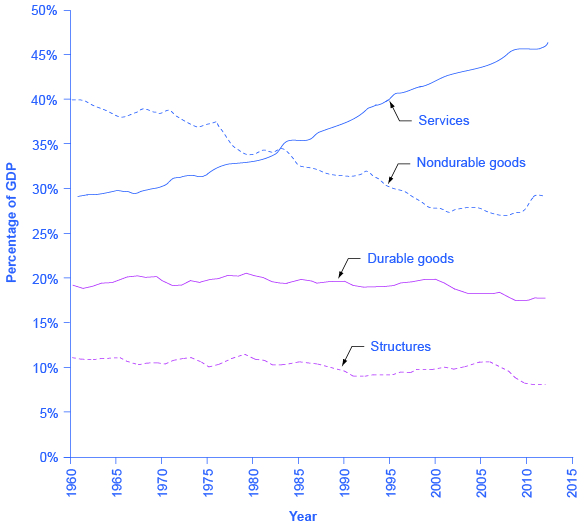 Let’s take a closer look at these components of GDP:

In thinking about what is produced in the economy, many non-economists immediately focus on solid, long-lasting goods, like cars and computers. Goods that last three or more years are called durable goods. Goods that last less than three years are called nondurable goods. By far the largest part of GDP, however, is services. Moreover, services have been a growing share of GDP over time. A detailed breakdown of the leading service industries would include healthcare, education, and legal and financial services. It has been decades since most of the U.S. economy involved making solid objects. Instead, the most common jobs in a modern economy involve a worker looking at pieces of paper or a computer screen; meeting with co-workers, customers, or suppliers; or making phone calls.

Even within the overall category of goods, Table 2 shows that long-lasting durable goods like cars and refrigerators are about the same share of the economy as short-lived nondurable goods like food and clothing.

The category of structures includes everything from homes, to office buildings, shopping malls, and factories. The new structures that were built, or produced, during a time period are counted in this measure of GDP, which is another way of looking at investment, as it was discussed above in focusing on demand to measure GDP.

Inventories is a small category that refers to the goods that have been produced by one business but have not yet been sold to consumers, and are still sitting in warehouses and on shelves. The amount of inventories sitting on shelves tends to decline if business is better than expected, or to rise if business is worse than expected. When a business produces output but fails to sell it, the increase in inventory is treated as an investment expenditure.

Another Way to Measure GDP: The National Income Approach

GDP is a measure of what is produced in a nation. The primary way GDP is estimated is with the Expenditure Approach we discussed above, but there is another way.

Everything a firm produces, when sold, becomes revenues to the firm. Businesses use revenues to pay their bills: Wages and salaries for labor, interest and dividends for capital, rent for land, profit to the entrepreneur, etc. So adding up all the income produced in a year provides a second way of measuring GDP. This is why the terms GDP and national income are sometimes used interchangeably. The total value of a nation’s output is equal to the total value of a nation’s income.

durable good:
a good that last three years or more, such as a car or  refrigerator
gross domestic product (GDP):
the value of the output of all final goods and services produced within a country in a year
inventory:
good that has been produced, but not yet been sold
national income:
includes all income earned: wages, profits, rent, and profit income
nondurable good:
a good that lasts less than three years, such as food and clothing
service:
product which is intangible (in contrast to goods) such as entertainment, healthcare, or education
structure:
building used as residence, factory, office building, retail store, or for other purposes
trade balance:
gap between exports and imports
trade deficit:
exists when a nation’s imports exceed its exports and is calculated as imports –exports
trade surplus:
exists when a nation’s exports exceed its imports and is calculated as exports – imports