What you’ll learn to do: examine causes and types of unemployment, including cyclical, frictional, structural, and natural unemployment

Workers become unemployed for different reasons, some of which are more problematic than others. Consider the following two examples, neither of which is considered a “layoff”: a college student quits her part time job when she graduates from college to look for a career and a steel worker becomes replaced by an industrial robot. We typically don’t see the former as a major social problem, but we often see the latter that way. What causes different types of unemployment and what government policies, if any, can help get those individuals back to work? These questions are what we’ll consider next.

When people think of unemployment, most of the time they imagine a situation where the economy slows down and businesses respond to the decrease in demand for their products by reducing production and laying off workers. Let’s explore this “cyclical” unemployment in more detail by considering the market for labor.

Firms hire labor because they need workers to produce their products. Workers supply labor in order to earn income. Together, these represent the demand for and supply of labor, as we explained briefly earlier in the module on supply and demand. Equilibrium in the labor market occurs at the wage rate where the quantity of labor demanded equals the quantity of labor supplied. The equilibrium wage rate and employment level are shown in Figure 1. 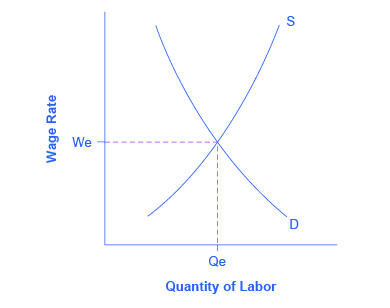 Figure 1. Equilibrium in the Labor Market. In a labor market with flexible wages, the equilibrium will occur at wage We and quantity Qe, where the number of people looking for jobs (shown by S) equals the number of jobs available (shown by D).

One primary determinant of the demand for labor from firms is how they perceive the state of the macro economy. If firms believe that business is expanding, then at any given wage they will desire to hire a greater quantity of labor, and the labor demand curve shifts to the right. (We assume that there is no substantial change in the age structure of the labor force, institutions and laws affecting the labor market, or other factors that might shift the supply curve for labor.)

Conversely, if firms perceive that the economy is slowing down or entering a recession, then they will wish to hire a lower quantity of labor at any given wage, and the labor demand curve will shift to the left. The variation in unemployment caused by the economy moving from expansion to recession or from recession to expansion (i.e. the business cycle) is known as cyclical unemployment.

From the standpoint of the supply-and-demand model of competitive and flexible labor markets, unemployment represents something of a puzzle. In a supply-and-demand model of a labor market, as illustrated in Figure 1, the labor market should move toward an equilibrium wage and quantity. At the equilibrium wage (We), the equilibrium quantity (Qe) of labor supplied by workers should be equal to the quantity of labor demanded by employers.  In other words, there should be no unemployment.

Suppose that real world labor markets do not have perfectly flexible wages. In particular, even though wage increases may occur with relative ease, wage decreases are few and far between.

One set of reasons why wages may be “sticky downward,” as economists put it, involves economic laws and institutions. For low-skilled workers being paid the minimum wage, it is illegal to reduce their wages. For union workers operating under a multiyear contract with a company, wage cuts might violate the contract and create a labor dispute or a strike. However, minimum wages and union contracts are not a sufficient reason why wages would be sticky downward for the U.S. economy as a whole. After all, out of the 150 million or so workers in the U.S. economy, only about 1.4 million—less than 2% of the total—are paid the minimum wage. Similarly, only 10.7% of American wage and salary workers were represented by a labor union in 2016. In other high-income countries, more workers may have their wages determined by unions or the minimum wage may be set at a level that applies to a larger share of workers. But for the United States, these two factors combined affect only about one-fifth or less of the labor force.

These theories of why wages tend not to move downward differ in their logic and their implications, and figuring out the strengths and weaknesses of each theory is an ongoing subject of research and controversy among economists. All tend to imply that wages will decline only very slowly, if at all, even when the economy or a business is having tough times. When wages are inflexible and unlikely to fall, then either short-run or long-run unemployment can result. This can be seen in Figure 2. 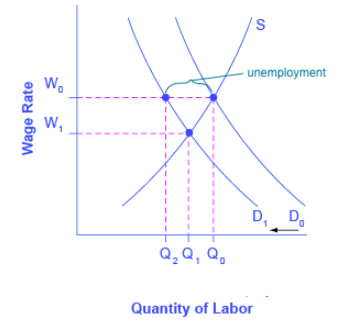 Figure 2. Falling Demand for Labor. In a labor market where wages do not decline, a fall in the demand for labor from D0 to D1 leads to a decline in the quantity of labor demanded at the original wage (W0) from Q0 to Q2. These workers will want to work at the prevailing wage (W0), but will not be able to find jobs.

From an initial equilibrium at W0 and Q0, suppose the demand for labor shifts to the left, from D0 to D1, as it would tend to do in a recession. Because wages are sticky downward, they do not adjust toward what would have been the new equilibrium wage (W1), at least not in the short run. Instead, after the shift in the labor demand curve, the same quantity of workers is willing to work at that wage as before; however, the quantity of workers demanded at that wage has declined from the original equilibrium (Q0) to Q2. The gap between the original equilibrium quantity (Q0) and the new quantity demanded of labor (Q2) represents workers who would be willing to work at the going wage but cannot find jobs. In other words, the gap represents unemployment.

Contrast the previous situation with the opposite scenario where demand for labor increases as the economy expands. If the expansion follows a recession, then the demand for labor shifts from D1 to D0 in Figure 2, reducing the unemployment and returning the labor market to equilibrium at W0 and Q0. This analysis helps to explain the connection noted earlier: that cyclical unemployment tends to rise in recessions and to decline during expansions.

Figure 3 shows what happens if the economy continues to expand. The demand for labor shifts further right from D0 to D2, and the equilibrium quantity of labor hired increases from Q0 to Q2. Since wages are only sticky downward, the equilibrium wage rises from W0 to W2. It does not hurt employee morale at all for wages to rise. 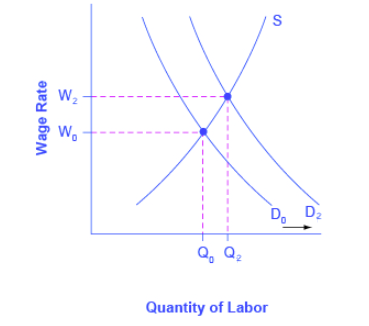 Figure 3. Rising Wage and Employment. In a labor market where wages are able to rise, an increase in the demand for labor from D0 to D2 leads to an increase in equilibrium quantity of labor hired from Q0 to Q2 and a rise in the equilibrium wage from W0 to W2.

Watch this video for an explanation of cyclical unemployment and to learn more about why wages are sticky.

adverse selection of wage cuts argument:
if employers reduce wages for all workers, the best workers will leave
cyclical unemployment:
unemployment closely tied to the business cycle, like higher unemployment during a recession
efficiency wage theory:
the theory that the productivity of workers, either individually or as a group, will increase if they are paid more
implicit contract:
an unwritten agreement in the labor market that the employer will try to keep wages from falling when the economy is weak or the business is having trouble, and the employee will not expect huge salary increases when the economy or the business is strong
insider-outsider model:
those already working for the firm are “insiders” who know the procedures; the other workers are “outsiders” who are recent or prospective hires
relative wage coordination argument:
across-the-board wage cuts are hard for an economy to implement, and workers fight against them