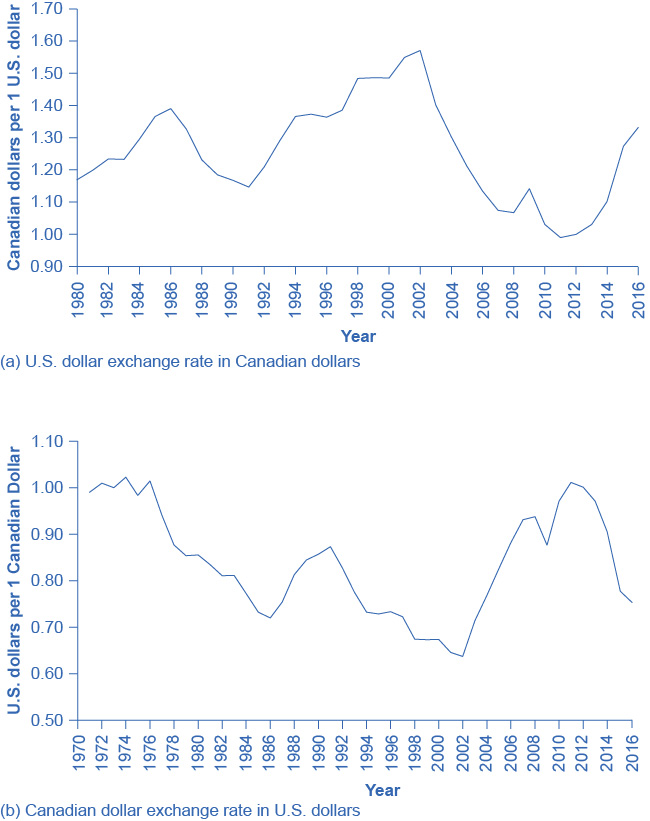 Figure 1. Exchange rates tend to fluctuate substantially, even between bordering countries such as the United States and Canada. By looking closely at the time values (the years vary slightly on these graphs), it is clear that the values in part (a) are a mirror image of part (b), which demonstrates that the depreciation of one currency correlates to the appreciation of the other and vice versa. This means that when comparing the exchange rates between two countries (in this case, the United States and Canada), the depreciation (or weakening) of one country (the U.S. dollar for this example) indicates the appreciation (or strengthening) of the other currency (which in this example is the Canadian dollar). (Source: Federal Reserve Economic Data (FRED) https://research.stlouisfed.org/fred2/series/EXCAUS)

This video explains how the exchange rate is determined using supply and demand.

With the price of a typical good or service, it is clear that higher prices benefit sellers and hurt buyers, while lower prices benefit buyers and hurt sellers. In the case of exchange rates, where the buyers and sellers are not always intuitively obvious, it is useful to trace through how different participants in the market will be affected by a stronger or weaker currency. Consider, for example, the impact of a stronger U.S. dollar on six different groups of economic actors, as shown in Figure 2: (1) U.S. exporters selling abroad; (2) foreign exporters (that is, firms selling imports in the U.S. economy); (3) U.S. tourists abroad; (4) foreign tourists visiting the United States; (5) U.S. investors (either foreign direct investment or portfolio investment) considering opportunities in other countries; (6) and foreign investors considering opportunities in the U.S. economy. 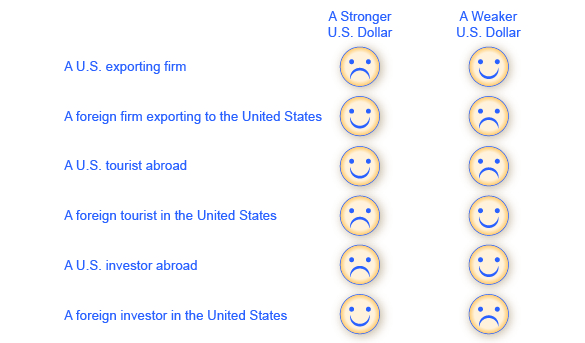 The preceding paragraphs all focus on the case where the U.S. dollar becomes stronger. The corresponding happy or unhappy economic reactions are illustrated in the first column of Figure 2. The following feature centers the analysis on the opposite: a weaker dollar.

Let’s examine the effects of a weaker dollar in various scenarios.

Scenario 1: What will happen to the price of a Ford pickup truck in the U.K. if the value of the dollar weakens?

First, we note that the demand for U.S. exports is a function of the price of those exports, which depends on the dollar price of those goods and the exchange rate of the dollar in terms of foreign currency. For example, a Ford pickup truck costs $25,000 in the United States. When it is sold in the United Kingdom, the price is $25,000/$1.50 per British pound, or £16,667. The dollar affects the price faced by foreigners who may purchase U.S. exports.

Next, consider that, if the dollar weakens, the pound rises in value. If the pound rises to $2.00 per pound, then the price of a Ford pickup is now $25,000/$2.00 = £12,500. A weaker dollar means the foreign currency buys more dollars, which means that U.S. exports appear less expensive.

From this, we conclude that a weaker U.S. dollar leads to an increase in U.S. exports. For a foreign exporter, the outcome is just the opposite.

Scenario 2: How does a depreciating dollar affect the exchange of British beer in the United States?

U.S. tourists going abroad face the same situation as a U.S. importer—they are purchasing a foreign trip. A weaker dollar means that their trip will cost more, since a given expenditure of foreign currency (e.g., hotel bill) will take more dollars. The result is that the tourist may not stay as long abroad, and some may choose not to travel at all.

Scenario 4: How does a weaker dollar affect foreign tourists traveling to the United States?

Scenario 5: How does a weaker dollar affect investments?

Foreign investors in the Unites States will have the opposite experience. Since foreign currency buys more dollars, they will likely invest in more U.S. assets.

Watch this video to practice analyzing the impact of shifters on supply and demand in the foreign exchange market.