What you’ll learn to do: analyze and measure economic inequality

In September 2011, a group of protesters gathered in Zuccotti Park in New York City to decry what they perceived as increasing social and economic inequality in the United States. Calling their protest “Occupy Wall Street,” they argued that the concentration of wealth among the richest 1% in the United States was both economically unsustainable and inequitable, and needed to be changed. The protest then spread to other major cities, and the Occupy movement was born.

Why were people so upset? How much wealth is concentrated among the top 1% in our society? How did they acquire so much wealth? These are very real, very important questions in the United States now, and this section on economic inequality will help us address the causes behind this sentiment.

In a market economy, your income depends on the resources you own (e.g. labor, land, etc.), and the value the market places on those resources. People who own a lot of resources and people who own resources that are highly valued will tend to earn higher incomes than people who do not. As a consequence, market economies tend to result in inequality of income and wealth. Whether this is good or bad depends at least in part on the degree of inequality. Few Americans believe that Bill Gates doesn’t deserve to be rich, because of the significant value his company, Microsoft, has brought to people. But should he have 100 times the wealth of the average American or 1 million times? That is the question.

Poverty levels can be subjective based on the overall income levels of a country. Typically a government measures poverty based on a percentage of the median income. Income inequality, however, has to do with the distribution of that income, in terms of which group receives the most or the least income. Income inequality involves comparing those with high incomes, middle incomes, and low incomes—not just looking at those below or near the poverty line. In turn, measuring income inequality means dividing the population into various groups and then comparing the groups, a task that we can be carry out in several ways. 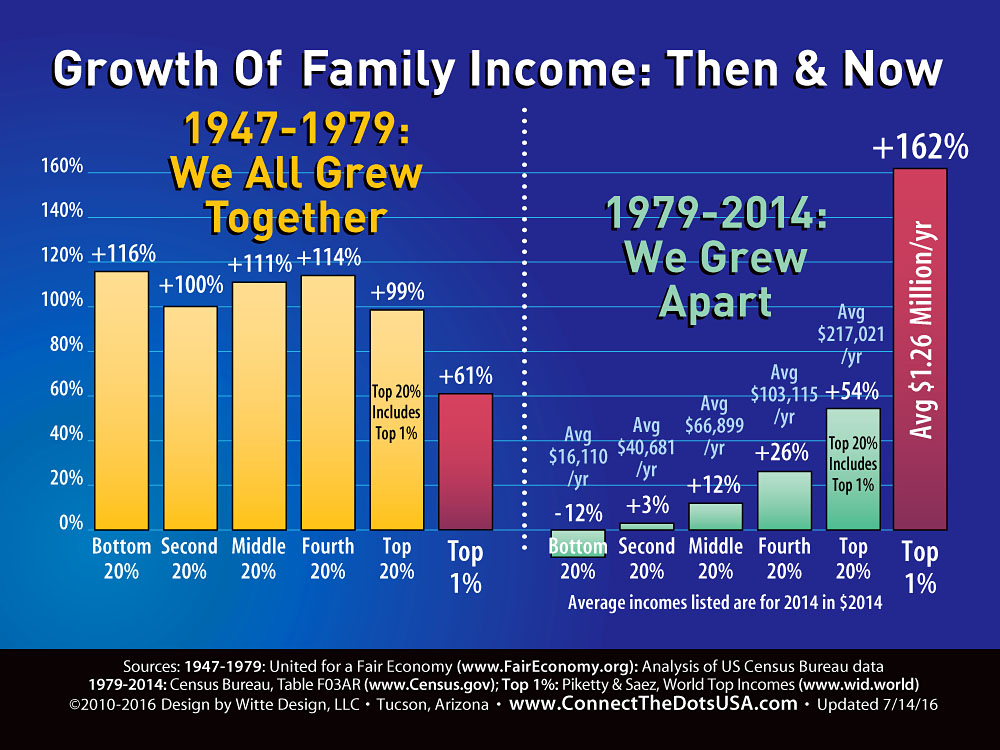 One common way of measuring income inequality is to rank all households by income, from lowest to highest, and then to divide all households into five groups with equal numbers of people, known as quintiles. This calculation allows for measuring the distribution of income among the five groups compared to the total. The first quintile is the lowest fifth or 20%, the second quintile is the next lowest, and so on. We can measure income inequality by comparing what share of the total income each quintile earns.

The data on income inequality can be presented in various ways. For example, you could draw a bar graph that showed the share of income going to each fifth of the income distribution. Figure 2 presents an alternative way of showing inequality data in what is called a Lorenz curve. The Lorenz curve shows the cumulative share of population on the horizontal axis and the cumulative percentage of total income received on the vertical axis. 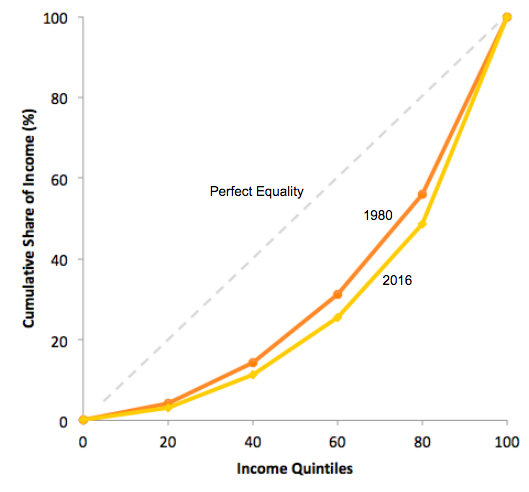 Every Lorenz curve diagram begins with a line sloping up at a 45-degree angle. We show it as a dashed line in Figure 2. The points along this line show what perfect equality of the income distribution looks like. It would mean, for example, that the bottom 20% of the income distribution receives 20% of the total income, the bottom 40% gets 40% of total income, and so on. The other lines reflect actual U.S. data on inequality for 1980 and 2016.

This video explains income inequality and discusses some potential causes and fixes for reducing the large disparity between incomes in America.