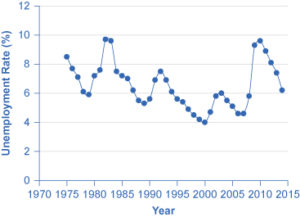 bar graph:
shows data as vertical bars; the height of different bars are used to compare quantities
line graph:
shows a relationship between two variables: one measured on the horizontal axis and the other measured on the vertical axis
pie graph:
used to show how an overall total is divided into parts. A circle represents a group as a whole and slices of this circular “pie” show the relative sizes of subgroups. Also called a pie chart
time series:
type of line graph in which the horizontal axis shows time and the vertical axis displays another variable. Thus, a time-series graph shows how a variable changes over time