What you’ll learn to do: State the basic principles of the unified cell theory

A cell is the smallest unit of a living thing. A living thing, whether made of one cell (like bacteria) or many cells (like a human), is called an organism. Thus, cells are the basic building blocks of all organisms. In this outcome we will learn about the discovery and origin of cells.

State the basic principles of the unified cell theory

A cell is the smallest unit of life. Most cells are so tiny that they cannot be seen with the naked eye. Therefore, scientists use microscopes to study cells. The first microscopes were used in the 1600s by Antony van Leeuwenhoek, a Dutch shopkeeper who had great skill in crafting lenses. Despite the limitations of his now-ancient lenses, van Leeuwenhoek observed the movements of protista (a type of single-celled organism) and sperm, which he collectively termed “animalcules.” 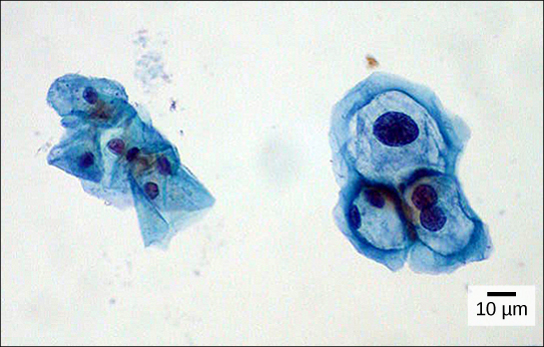 Figure 1. These uterine cervix cells, viewed through a light microscope, were obtained from a Pap smear. Normal cells are on the left. The cells on the right are infected with human papillomavirus (HPV). Notice that the infected cells are larger; also, two of these cells each have two nuclei instead of one, the normal number. (credit: modification of work by Ed Uthman, MD; scale-bar data from Matt Russell)

Have you ever heard of a medical test called a Pap smear (shown in Figure 1)? In this test, a doctor takes a small sample of cells from the uterine cervix of a patient and sends it to a medical lab where a cytotechnologist stains the cells and examines them for any changes that could indicate cervical cancer or a microbial infection.