What you’ll learn to do: compare examples of effective and poor leadership

What do these different leadership traits and styles look like in practice? Looking at real-world examples of good—and bad—leadership will help deepen your understanding of them.

Warren Buffett has become one of the wealthiest men in the world through his leadership of the investment and holdings company Berkshire Hathaway Inc. As chairman, president, and CEO, Buffett is the obvious formal leader at Berkshire Hathaway, but his effective leadership is perhaps better demonstrated by the devoted following he has outside of the official structure of the company. Thousands of individuals travel to hear him at his annual investor meetings, follow his activities and advice, and read his annual shareholder letter[1]. 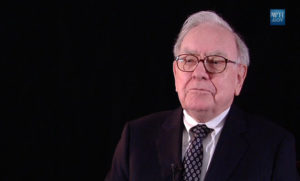 One of the easily identifiable reasons for this is his unparalleled success as an investor, which has led to his becoming one of the wealthiest individuals in the world[2]. However, there are also a number of key features of his leadership style that have strongly contributed to his effectiveness and influence with his followers.

One interesting fact about Buffett is his “light touch” as a manager. His work is to identify companies for purchase that he believes are well-managed and situated for success. As a rule, he buys only companies whose directors and direction he trusts. Because he has confidence in them and their direction, he is happy to leave them to their work with as little interference as possible, which is a trait that appeals to many companies looking for a potential buyer.

If we look at Buffett’s informal leadership influence, a number of traits stand out as contributing forces for his effectiveness. To begin with, he is an excellent example of a leader who presents a vision, stands firmly behind it, and inspires others to confidence and enthusiasm about that vision[3]. His approach to investing is starkly different from that of many others. He emphasizes a deep understanding of companies and their industries, even refusing for the most part to involve himself in the tech sector simply because he feels he doesn’t understand that realm well enough to make wise investing decisions. He urges the wisdom of buying solid, successful companies and trusting in their long-term success. This approach contrasts sharply with an eager obsession to discover an unknown company that is about to explode in value and provide quick riches. This patient, steady approach to long-term investing has proven effective in the extreme, and many others have placed their confidence in Buffett’s message and vision. As an important ingredient in this vision-casting, many have attested to Buffett’s skill in presenting his approach with a great simplicity that enables his followers to understand the vision easily and deeply, inspiring further confidence.

Two other aspects of Buffett’s leadership style call for comment: his truthfulness and his optimism[4]. He represents what many consider the “honest” way to achieve investing success. He has not sought quick riches through questionable means. He has been transparent and straightforward about his activities. He has also been quick to recognize his mistakes in investing when he has made them. This honesty and transparency are appreciated, especially in contrast with the opposite feeling that surrounds too many in the investment world.

Buffett’s optimism and positivity also contribute to his overall effectiveness as a leader. He sees the future as one of bright potential and focuses on that potential rather than dwelling on mistakes and other negative aspects of life. Though he certainly recognizes problems and is straightforward about negative situations, he does not allow them to control his outlook. He challenges others to adopt that same positive mindset, and many have responded to that challenge.

At one point in Martin Winterkorn’s tenure as CEO of Volkswagen, the auto manufacturer was in the midst of a historically impressive run of increased market share and revenue gains. Winterkorn had set ambitious goals to dominate the world auto market by 2018. The forecast for achieving those goals was very positive based on the progress the company was experiencing[5]. Winterkorn’s ambition and dedication to success were hailed as vital leadership ingredients propelling Volkswagen forward.

However, shocking news of a widespread scandal within the company disrupted that upward trajectory. The manufacturer was found to have installed secret software that would falsify emissions readings for vehicles when tested[6]. As a result of this scandal, Winterkorn’s name now stands as a prominent example of leadership that is not to be imitated. The most significant feature of his legacy as leader of Volkswagen will always be the scandal that led to his resignation. Consider the negative tone that dominates the issue in the following brief video:

Many people have evaluated the culture of the Volkswagen company under Winterkorn’s care in light of the scandal. In the midst of a highly successful period for the company, Winterkorn remained doggedly determined to push for more. Winterkorn was known for his exacting standards and perfectionism. The internal climate at Volkswagen was demanding in the extreme. Even if Winterkorn was indeed ignorant of the unethical goings-on, it has been suggested that his approach fostered an environment where the illegal activities would be seen as an acceptable risk to take in the pursuit of success. In the resultant climate, failure simply was not an option, even if it meant these illegal steps. A leader must consider the impact that his leadership style and demeanor have on his subordinates.

Executive Carrie Tolstedt is viewed as largely responsible for the fraudulent accounts scandal at Wells Fargo.

Another leadership lesson can be learned from the career of Carrie Tolstedt of Wells Fargo. Rising to prominence from humble beginnings, Tolstedt was highly praised as a leading businesswoman both by those within her company and those outside. She earned numerous awards and was seen as a trailblazer for women within the banking industry. Her vision of retail banking was so successful that under her management as head of community banking, Wells Fargo quickly became an industry leader in many areas, such as retail deposit volume and customer loyalty. She espoused her belief that banking was all about serving others, helping them succeed financially. Her rise to success in the banking world has been described as something out the storybooks[7].

The narrative quickly changed, however, when revelations were made of widespread fraudulent account creations within the bank. There are many similarities to Winterkorn’s case with VW. Tolstedt was renowned for her ambitious goals for sales and customer account creations. She pushed managers and employees to reach goals that many thought were unrealistic, and she encouraged them to find their own creative ways to achieve those goals. Even when dishonest activity was reported, Tolstedt and others judged this an acceptable cost for the growth. The climate created by the high demands once again fostered the fraudulent activity.

Further criticism has suggested that Tolstedt did not show significant concern for the harm done to customers through the fraudulent activities taking place. An internal investigation found she was resistant to change and inflexible. The failure to address the fraud became a huge problem for both her and the company[8].

Negative stories such as these remind us of the complexity of leadership and management. Tolstedt set a simple growth goal and paid meaningful rewards to those who met it. The next module discusses the dangers of simple goals. Employees will ignore the negative consequences and pursue the goal single-mindedly. Leadership is responsible for seeing the big picture, not just the simple measures embedded in the incentive system. 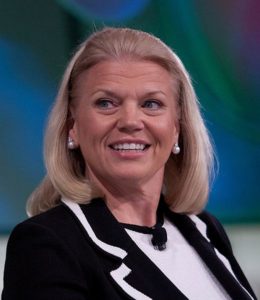 The positive leadership example of Ginni Rometty of IBM provides some unique and interesting lessons. As Rometty has pointed out, IBM has been a successful, publicly-traded tech company for more than one hundred years, which is an extremely lengthy heritage in a field that changes quickly. Much of IBM’s legacy business is in the field of computer hardware systems, and the changing technology market has led Rometty to the conclusion that IBM must transform itself as a company to keep up with the evolving times. For a number of years now, she has been overseeing a significant shift of focus for the company. She has indeed cast a vision for IBM to make “cognitive computing” the mainstay of their operations, placing large emphasis on the development of their artificial intelligence entity known as “Watson.”[9]

Rometty’s democratic, soft-spoken, and generally popular leadership style has enabled her to continue as an effective leader thus far despite the less than exciting trends for the company. Many analysts consider her to be moving the company in the right direction, and they recognize that the changing technological environment makes things difficult for IBM and requires this transition. She continues to have the trust of those who have accepted her vision. 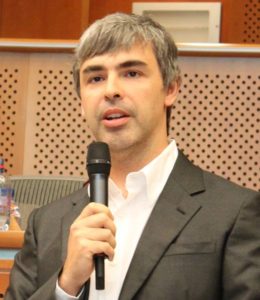 Larry Page, cofounder and CEO of Google, provides an interesting contrast in leadership styles to many other successful leaders. Page is certainly considered demanding and highly motivated, and the success of Google under his guidance has been outstanding. His approach to leadership, however, has fostered a very different atmosphere than in some of the previous examples. Google’s employees rate their work environment highly, and Page himself receives some of the highest approval ratings for CEOs in the business realm[10].

One of Page’s outstanding traits is his commitment to pursing innovation. He believes that outlandish and seemingly impossible ideas should be cultivated and encouraged, not rejected. These are the ideas, he says, that can change the world[11].

The “demanding” aspect of his leadership arises from this desire to pursue innovation. Page is able to inspire his team to seek that innovation with him, rather than drive them to fear of failure. Employees and executives who have worked for and with Page have attested to the fact that he invites open discussion of ideas, even if they might contradict his own thoughts. When Page visits meetings and teams of researchers and engineers, as he often does, his visits are not dreaded but welcomed. His persistent questioning is received as a team effort to improve and strive for new ideas rather than seen as an effort to find problems that will be the basis for rebuke. Even though Page’s personality tends toward the reserved and introverted end of the spectrum, he has found the right approach to connecting with and inspiring his team members.