What you’ll learn to do: describe organizational culture, and explain how culture can be a competitive advantage

Organizational culture is a term that describes the shared values and goals of an organization. When everyone in a corporation shares the same values and goals, it’s possible to create a culture of mutual respect, collaboration, and support. Companies that have a strong, supportive culture are more likely to attract highly qualified, loyal employees who understand and work toward the company’s best interests.

Organizational culture is a term that can relate to any organization at all, from a church to a university. When talking about the culture of a business, you’ll often hear the term “corporate culture.” Corporate culture is, according to INC Magazine:

the shared values, attitudes, standards, and beliefs that characterize members of an organization and define its nature. Corporate culture is rooted in an organization’s goals, strategies, structure, and approaches to labor, customers, investors, and the greater community. As such, it is an essential component in any business’s ultimate success or failure.[1]

Like families (or nations), corporations have cultures. Sometimes those cultures “just happen.” All too often, when corporate culture is not intentionally created, the culture winds up being disjointed or even antagonistic. Employees are all working toward different goals, in different ways, with different approaches. For instance, although Bob is dedicated to the idea of crafting quality products, Suzanne is eager to sell as much product as possible (even if the quality is only so-so). Meanwhile, Brad thinks the company should start making a wider range of products and is trying to push his ideas forward during sales meetings.

Perhaps the best way to get an idea of what we’re talking about when we talk about corporate culture is to consider some examples. Let’s take a look at the cultures inside a few well-known companies.

IBM’s founder Thomas Watson was one of the great developers of corporate culture. Based on a very different worldview than the one we have today, it encouraged morality, temperance, and consistency. Men who worked for IBM were expected to dress in a certain style (dark suits, white shirts) and behave conservatively. The “IBM Spirit” was even represented in corporate songs such as “Ever Onward” that employees were required to sing at gatherings and conventions.

The lyrics to “Ever Onward,” captured in a songbook from 1937, are a great way to understand the original culture of a company that became one of the truly great icons of American business. Read one verse of the song that follows.

EVER ONWARD – EVER ONWARD!
That’s the spirit that has brought us fame!
We’re big, but bigger we will be
We can’t fail for all can see
That to serve humanity has been our aim!
Our products now are known, in every zone,
Our reputation sparkles like a gem!
We’ve fought our way through – and new
Fields we’re sure to conquer too
For the EVER ONWARD I.B.M.[2]

Watch the following video to hear the song and find out more about IBM’s early corporate culture:

One business that has revolutionized the way of work and its vision about it is Google. Google has become known as the company with endless perks for its valued employees. Some of these include coffee bars, free meals, lounge breaks, and even the option to bring your pet to work! Google has locations worldwide, and management embraces the idea that a happy employee leads to a productive workplace. The company’s long-term success ties back to its corporate culture and values. Here’s a list of Google’s core values, around which it builds its corporate culture:

Google likes to make sure its employees are having fun, but Apple’s corporate culture is a bit more focused on getting things done. Its founder, Steve Jobs, passed along a set of core values that make it clear that competition, focus, and hard work are part of the organizational culture:

Compare Apple’s values to those of Google. Apple focuses on competition, outcomes, and excellence, whereas Google emphasizes values such as having fun, behaving ethically, serving the customer, and engaging with the wider world. Both companies make digital products, both have seen great success, and both attract plenty of dedicated employees. But because the corporate cultures are so different, Apple and Google attract different people who have different personal goals, work styles, and expectations.

Corporate Culture as a Competitive Advantage

Why is it so important to have a strong, positive corporate culture? There are three good reasons: 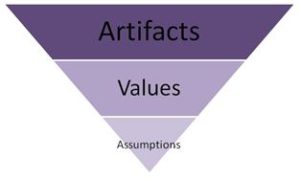 E.H. Schein is a theorist who studies corporate culture. In 1992, he wrote a book titled Organizational Culture and Leadership, which suggests that there are three levels of corporate culture. At the core of a culture are basic assumptions about human behavior, which are usually so ingrained into the culture that they’re difficult to pinpoint. Surrounding the assumptions are expressed values drawn from those assumptions. These usually appear in the form of standards, rules, and public expressions of the organization’s philosophy. At the surface level are artifacts that are the outcome of the assumptions and values—these appear as actions, policies, the physical environment, office jokes, and so on.

For example, when Home Depot, under the leadership of a new CEO, needed to return the company to its customer-centric roots in 2007, it quickly introduced artifacts—buttons and awards—to remind everyone who came first: customers. Sales associates began wearing buttons that invited customers to ask for help. Associates were rewarded for outstanding customer reviews and recognized in meetings with sales plaques and more buttons. With a renewed focus on its stated value of providing excellent customer service, Home Depot began hiring people who loved serving customers instead of worrying about costs and profits. Management did not completely abandon the cost discipline of its previous CEO, but it loosened the reins substantially. The underlying assumption was that profits would return if the company took care of customers. Profits did return, although the competition from Lowe’s has been stiff.

There is no right or wrong set of assumptions and values, and companies can be successful no matter which values they embrace. You are, however, most likely to do well with a company that shares your beliefs. Just looking around a workplace can help you to determine whether a company values hierarchy or shared authority, individual achievement or teamwork.