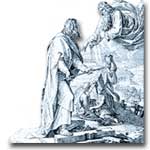 According to the Bible, God forewarned Noah of a great flood that would cover all of the Earth. To ensure that creatures of the land would survive, he and his family constructed an enormous boat or “ark” to save two of each species.

“A black cloud rose…
Gathering speed as it blew, drowning the mountains,
Overcoming the people as in battle…
For six days and seven nights
The flood wind blew as the South Storm swept the land.
At sunrise in the seventh day…
The sea grew quieter, the storm subsided, the flood ceased.” -Tablet XI, The Epic of Gilgamesh

Archaeologists aboard a ship named Northern Horizon watched in amazement as a rectangular shape slid across their video screens. Here, eight miles off the Turkish shore, submerged beneath 300 feet of water, was the remains of a house. It was just what they had been searching for.

It was September 9, 2000. The pictures were relayed to the mothership by Little Hercules, a tiny submarine robot, which slipped through the murky waters of the Black Sea scrutinizing the sea floor.

“What we’ve done today is of world importance,” Dr. Fredrik Hiebert, the expedition’s chief archaeologist, solemnly announced. He might be right. The underwater house was startling evidence of a gigantic flood recounted in the Old Testament (Noah’s Ark) and described above in the Epic of Gilgamesh.

How do we know about the past? Did a giant flood actually occur? Or were the stories of Gilgamesh and Noah folk tales intended to provide moral guidance?

Scientists today are helping to decide. It’s hard, complicated work though. The Epic of Gilgamesh was lost for thousands of years. Recovering it took the patient excavation of the ruined cities of Mesopotamia; the discovery of libraries of clay tablets, then the deciphering of cuneiform writing and several ancient languages. 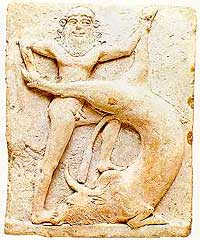 The Epic of Gilgamesh is the world’s first great work of literature, and features the exploits of Gilgamesh — the actual king of the Sumerian city of Uruk. Here, Gilgamesh takes great pride in his slaying of a bull.

Gilgamesh, we now know, was a real king, ruler of the Sumerian city of Uruk, located on the Euphrates River in modern Iraq. His epic/fact/myth was first written down on clay tablets about 2000 B.C. It is the first great work of world literature — an adventure story, a story of morality and tragedy, and the vain search for eternal life.

Dozens of legends worldwide contain similar flood stories. In 1997, two Columbia University oceanographers, William Ryan and Walter Pitman, began wondering, could these tales have some basis in fact? Here is what they proposed:

Twelve thousand years ago, at the end of the last Ice Age, the Black Sea was an isolated freshwater lake. As the climate warmed, an enormous icecap covering much of the Northern Hemisphere started to melt. Sea levels rose everywhere. One ominous day around 5600 B.C. the swollen waters of the Mediterranean cut through the hills surrounding the Black Sea. A torrent cascaded toward the sea with the force of 200 Niagara Falls. Rising waters quickly flooded coastal plains, inundating farms and villages. Their terrified inhabitants fled to higher ground, carrying with them tales of a tremendous flood.

Now, in September 2000, came the first signs of human habitation: Little Hercules’ cameras revealed a rectangle of hewn wooden beams perhaps 12 feet across and twice as long, with “branches that seemed to be stuck in layers of mud.”

“What we were looking at” explains archaeologist Hiebert, “was a melted building made out of wattle and daub. Now, this is the typical type of construction for the ancient inhabitants along the Black Sea coast. And here we’re seeing it under 300 feet of water. It was one of the most astonishing things I’ve ever seen.”

Coming up with the theory of the Mediterranean flood took years of accumulated information about the earth’s past climates and changing sea levels. Proving it is taking still more skill and effort. How do we know about the past? By ideas and imagination, shared knowledge, and sheer hard work.

Why study the past? The tale of the flood should make that obvious — it’s fascinating. Stories about ourselves are always intriguing. Where did we come from? How did people from thousands of different cultures, over tens of thousands of years, live? How were their concerns different from or similar to our own? The past is full of surprises, but they never fall far from home. By learning more about who we were — and how we come to be here — we become more fully human.