Many of the throwing, grappling, choking, and falling techniques in the martial art of judo were culled from the various forms of jujitsu that existed in Japan since the medieval period.

It slices, it dices, it chops, it skewers. The samurai’s sword, or katana, was one of the most elegant and deadly weapons in military history. A warrior’s sword was his most prized possession. More than just the means of his livelihood, it was a symbol of his status.

No true samurai would enter combat by flailing his katana around wildly. A graceful weapon calls for an equally sophisticated way of handling it. Swordsmanship was a crucial skill that required not only combat prowess but also strict discipline and philosophical balance. This made Zen Buddhism, with its emphasis on spontaneity and physical and mental toughness, the ideal philosophical backdrop for a swordsman’s training.

The Mind Is Sharper Than the Sword

Zen not only helped a warrior solidify his resolve to do battle, it also helped him keep his wits about him. This anecdote about the master swordsman, Tsukahara Bokuden (1489-1571), illustrates the samurai’s quick thinking.

As Bokuden was crossing a lake on a ferry, another samurai challenged him to demonstrate his skill. Bokuden coolly responded that he was an adept of the “no sword” method. “My method consists not in defeating others,” he said, “but in not being defeated.” 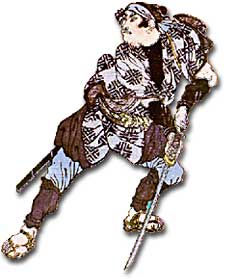 Jujitsu, in its present form, was developed by samurai warriors. They developed an unarmed form of combat because they were forbidden to wear weapons and feared their military skills would become obsolete.

The other samurai had the ferryman pull ashore to test Bokuden’s claim. When the boat reached land, the braggart hopped off and drew his sword. Bokuden took the boatman’s pole and shoved the boat back into the lake, stranding the samurai on dry land. Bokuden called to him, “Here is my no-sword school. I have just defeated you without a sword.”

Although warriors were also expected to be handy with the bow and arrow, the spear and the quarterstaff, it was sword handling that set the elite samurai apart from the common footsoldier.

The fascination with swordsmanship persists to this day. Because waving around an authentic katana is expensive, dangerous, and probably illegal, today people have been get their swordfighting fix through kendo. 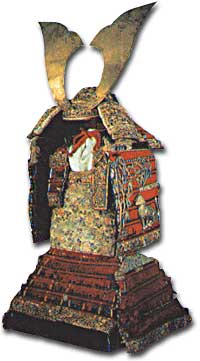 Kendo swords and armor have passed through many changes throughout the centuries. Armor, in particular, underwent many developments from the 10th through 12th centuries.

In this less lethal martial art, opponents wear heavy padding and solid headgear and strike each other with bamboo sticks instead of swords. This way, they can escape combat with only bruises and aches instead of slashes and gashes.

No Sword, No Problem

But the sword wasn’t the only weapon in a Japanese warrior’s arsenal. The samurai were also proficient in hand-to-hand combat, using ancient techniques collectively known as jujitsu. The objective of the various forms of jujitsu was to use an opponent’s strength against him by employing handholds and deft maneuvers to throw the opponent off balance.

Judo and aikido, popular throughout the world as techniques for self-defense, were derived from older forms of jujitsu as practiced by samurai masters.

Other forms of martial arts that took root in Japan were imported from Asian neighbors. Most notably, karate, (empty hands), originated in China or India and was transmitted to Japan via the Ryukyu Empire (present-day Okinawa). When that once-independent kingdom was taken over by a daimyo from Kyushu in 1609, the Ryukyuan people were forced to surrender their weapons.

Instead of remaining defenseless, they secretly developed a fighting style that combined their native martial arts with forms from China, such as Shaolin Temple kung fu, to create an effective method of unarmed combat. This did not remain a secret for long, though, and the art of karate spread far beyond the island.

Many of the martial arts that were either developed in Japan or adopted by the Japanese from elsewhere have become a global pastime. Judo is an Olympic sport, and aikido and karate have devoted practitioners throughout the world.

Although the samurai of old have become the new corporate “warriors” of Japanese big business, the flickering embers of the samurai spirit are fanned when someone in the world bows to their sensei (teacher), and learns a grip or form that a Japanese master developed centuries ago.