10e. Life During the Edo Period

10e. Life During the Edo Period 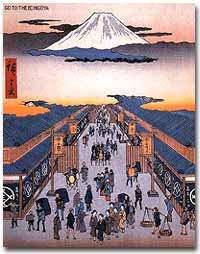 Busy streets crowded with pedestrians. Shopping opportunities for all budgets, from large merchant houses that pamper their clientele to vendors hawking their wares on the street. Events for all during the day followed by a vibrant nightlife after the sun goes down. A lively theater scene, with superstars in top acts playing to packed houses.

Sound like a guidebook description of New York, London, or Paris? Perhaps. But these images also depict a typical day in Edo, the bustling capital of the Tokugawa shogunate.

Before Tokugawa Ieyasu, Edo was a remote fishing village of little significance. But once the Tokugawa bakufu moved in, Edo became the center of political and cultural life — so much so that the duration of Tokugawa rule is also known as the Edo period (1600-1868).

For the first time in centuries, Japan was relatively peaceful. The strict political and social policies of Ieyasu and subsequent shoguns ushered in a golden age of economic and cultural prosperity. To maintain this so-called Pax Tokugawa, the bakufu instituted its sakoku (closed-country) policy in an attempt to keep foreign powers out of Japan. The Spanish, the English, and the Portuguese were expelled as subversive influences. Christianity was banned, and Japanese Christians were hunted down and persecuted.

Dutch traders were the only Europeans allowed to remain in Japan under the Tokugawa shogunate’s sakoku policy, but even they were restricted to Dejima, an artificial island constructed in Nagasaki harbor.

But sakoku was far from pure isolationism. Japan still conducted frequent but strictly regulated trade with Korea and China. And not all Europeans were driven out: the Dutch were allowed to maintain a small trading post on an artificial island in Nagasaki harbor.

With peace came a growing problem: a large population of warriors with nothing to do. The official class system sanctioned by the bakufu placed samurai at the top, followed by farmers and artisans, with merchants at the bottom. 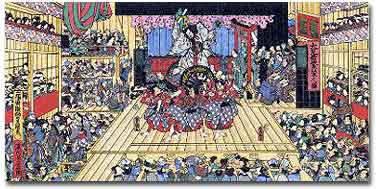 Of the many popular entertainments available to the residents of Edo, kabuki was perhaps the most spectacular. Lavish costumes, colorful sets, catchy music, and engrossing plots meant theaters packed with devoted fans.

But social reality contradicted this hierarchy. With growing boredom and shrinking stipends, lower-ranking samurai often found themselves borrowing money from wealthy merchants. Although traditional ideas of status still held, the actual balance of power was beginning to shift.

Merchant prosperity fostered the rise of commoner culture, giving rise to popular entertainments and diversions that even the samurai class couldn’t resist.

The jôruri, or puppet theater, offered elaborate plots and masterful puppeteering. Puppet theater is one of the most entertaining but technically demanding performing arts. 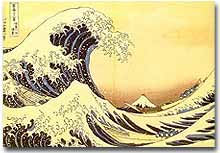 This Japanese woodblock print, one of the 36 Views of Mt. Fuji by the famous artist Hokusai, was made by carving a block of wood. Ink would then be rolled or painted on the block and paper would be pressed onto the painted surface to get a print. At first the prints were all black and white, but eventually a process for making color prints was developed.

The greatest jôruri playwright, Chikamatsu Monzaemon (1653-1724), crafted historical dramas and tragic romances that were wildly popular, in his day and beyond.

The flash and excitement of the Kabuki theater drew throngs of enthusiasts, and many performers became full-fledged celebrities. Lead actors were heartthrobs, and male actors who performed female roles — called onnagata — also enjoyed a die-hard following. 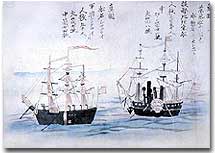 When the U.S. Navy steamed into Edo Bay in 1853 under orders from President Millard Fillmore and commanded by Commodore Matthew Perry, all of Japan was thrown into a panic. Although the Tokugawa shogunate had already started to flounder, the arrival of Perry’s heavily-armed “Black Ships” signalled the beginning of the end of the Edo period.

The likenesses of pop icons such as favorite Kabuki actors and sumo wrestlers could be widely distributed thanks to the development of the woodblock print.

This innovation allowed for mass reproductions of images and text, such as ukiyo-e paintings of the “floating world” — referring to the pleasure quarters of Edo — as well as works of popular fiction.

The more serious literary arts also flourished. The haiku poem — a short verse made up of only 17 syllables — was perfected by Matsuo Bashô (1644-1694) as an elegantly simple way to express subtle and elusive emotions.

Culinary history was forever altered by the ingenuity of an Edo street vendor named Yohei who came up with the idea of serving raw fish on little slabs of vinegared rice. Although different types of this dish — sushi — had existed in Japan since ancient times, the modern version got its start in Edo, and since then has spread over the globe.