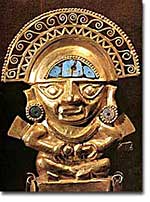 The Inca civilization had a great abundance of gold and silver, even by today’s standards. They used this precious metal for art and decoration rather than for coins.

“In the romance of the world’s history nothing ever impressed me more forcibly than the spectacle of this once great and lovely city overturned, desolate and lost; discovered by accident, overgrown by trees, it did not even have a name to distinguish it.” -John Lloyd Stephens, 1839 on first seeing Copan

In 1839, lawyer and writer John Lloyd Stephens plunged into the jungle of Guatemala in search of a lost city. With him he took his English friend, Frederick Catherwood, an artist and architect who could draw ancient ruins with unparalleled precision and grace. Fanciful reports of ruined cities, buildings encrusted with carvings, and stone sculptures of mythical creatures had circulated for years. Catherwood and Stephens came to check if such marvels really existed.

They did. In Incidents of Travel in Central America published in 1841, Stephens gave a delightful, touching account of their journey to the ruined sites. Catherwood’s engravings provided peerless views of their astonishing discoveries. The book became an immediate bestseller, bringing worldwide attention to the existence of sophisticated civilizations in Central America. 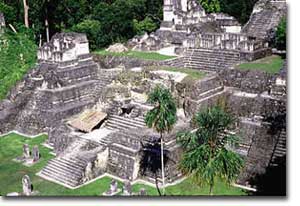 The Maya civilization is renowned for its splendid architecture. Cities and ceremonial centers like the Great Plaza at Tikal are filled with pyramids and ceremonial platforms that required precise planning and sophisticated engineering skills.

Stephens bought Copan, the first ruined city he encountered, for $50 from a man on whose land the ruined city stood. “I think he was not more surprised than if I had asked to buy his poor old wife,” remarked Stephens. 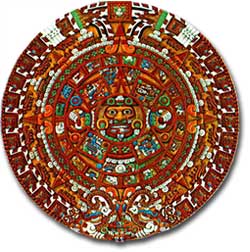 Aztec sunstones were used to calculate the date of an Aztec calendar. The face of Tonatiuh, the Aztec sun god, is depicted in the center of the sunstone.

With considerable insight, Stephens grasped that all the sites belonged to a single civilization. Those people were the Mayas, ancestors of the people still living in the Yucatan. And he understood that the strange “glyphs” — boxy images — engraved everywhere, were a form of writing. It took 150 years before experts fully accepted Stephens’ ideas and began deciphering what the Mayas had written.

Long Before the Europeans

Today, thousands of ancient sites have been uncovered in Central and South America. Beginning about 9,000 years ago, small bands of hunter-gatherers inhabited much of Mexico. By 2000 B.C.E., they had learned to farm corn, beans, squash, and other foodstuffs. 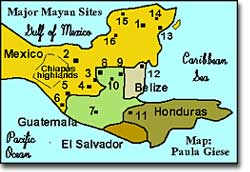 The ancient ruins of the Maya Empire are scattered throughout modern-day Central America, from Mexico to Honduras.

Along the coast of the Gulf of Mexico between 1200 B.C.E. and 400 C.E., the Olmecs flourished. The first to build ceremonial pyramids, the Olmecs carved portraits of their kings in colossal boulders 6 feet across. By 500 C.E., the people of Teotihuacan in the Valley of Mexico, built the massive Temple of the Sun. Rising 200 feet, its base of 600 feet equaled that of the pyramid of Khufu in Egypt — although it was only half Khufu’s height.

These and dozens of others cultures flourished in the centuries before the arrival of Europeans. Although there were differences, all were united by common cultural traits — sun worship, twin calendars of 260 and 365 days, and ritual murder to a pantheon of blood-thirsty gods. And all built their palaces and pyramids using the labor of their people. None had domesticated animals or the use of the wheel.

In the 1500s, when Spanish conquistadors appeared, two vast empires, those of the Aztecs and the Incas, dominated Central and South America. Both possessed divine kings, both were fractured by internal dissent, and both quickly succumbed to the Spanish onslaught. The physical remains of all these cultures lay dormant for centuries, until science and curiosity demanded their exploration. 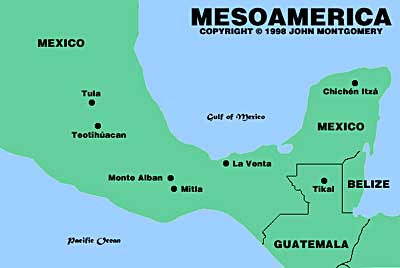