The Maya ruins at Palenque are both mysterious and beautiful. Examples of Maya glyphs are found throughout the temples. One building on the site is in fact named the Temple of the Inscriptions.

On June 15, 1952, Mexican archaeologists broke though a passageway within the Temple of the Inscriptions at Palenque. They stumbled into an underground crypt holding a limestone sarcophagus. Inside lay the bejeweled body of a ruler of Palenque, his face covered by a haunting jade mask. Who was this great leader? No one knew. They could not read the hieroglyphics carved on the sarcophagus.

In the past 25 years archaeologists have learned to read what the Mayas wrote. Today we know the names of kings and queens, how they lived, and when they died, transforming our view of Maya culture.

The Mayas covered their buildings and monuments with fascinating signs called glyphs. They also wrote books. Known as codices, they constructed them from fig tree bark, hammered thin. They coated the surface with lime, then folded it back-and-forth like an accordion. Some codices stretched for more than 20-feet. In 1562, at Mani, Bishop Landa destroyed 5000 Maya idols and burned every book he could find. Only a handful have survived. 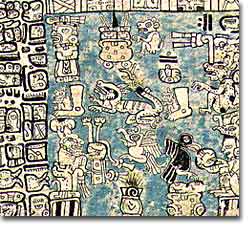 Glyphs found on the pages of Maya codices, such as the Madrid Codex, help researchers piece together the culture and history of the Mayas.

While destroying Maya culture, Landa also recorded it. He even wrote down their alphabet — 27 Maya glyphs accompanied by their equivalent letters in 16th-century Spanish:

Three As, two Bs, two Xs — it is a curious collection. In the early 1950s a Russian researcher, Yuri Valentinovich Knorosov, figured it out. Bishop Landa had given the name of each Spanish letter and asked his Maya informant to draw its sign.

No one took much notice. It was the height of the Cold War and Knorosov was a Communist. Besides the view in the West was that glyphs represented ideas directly. They were “memory-joggers,” not words.

The next breakthrough came from another Russian, Tania Proskouriakoff, who grew up in the United States. At Piedras Niegras she studied stelae — carved stone slabs — which the Mayas placed at the foot of important buildings. Each showed a figure, presumably a god, seated in a niche. Proskouriakoff noticed a curious pattern of numbers on them: a date, another date accompanied by a Frog glyph, and a third date with a Toothache glyph. Proskouriakoff grasped their significance.

The figures in the niches were kings — not gods. These were real people, real places, and real events. The Mayas were recording their past. This was their history.

And a bloody history it has turned out to be. There are tales of artfully plotted wars, of battles and the capture of prisoners, of kings dying at their enemies’ hands in ritual sacrifice. They have altered our idea of the Mayas from a peace-loving people, ruled by contemplative kings and astronomer-priests, to a collection of fiercely warring city-states.