11c. The Inca Empire: Children of the Sun

11c. The Inca Empire: Children of the Sun

When Spanish conquistador Francisco Pizarro landed in Peru in 1532, he found unimaginable riches. The Inca Empire was in full bloom. The streets may not have been paved with gold — but their temples were.

The Coricancha, or Temple of Gold, boasted an ornamental garden where the clods of earth, maize plants complete with leaves and corn cobs, were fashioned from silver and gold. Nearby grazed a flock of 20 golden llamas and their lambs, watched over by solid gold shepherds. Inca nobles strolled around on sandals with silver soles protecting their feet from the hard streets of Cuzco. 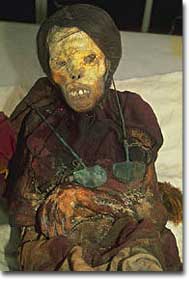 This mummified girl was discovered in 1995 on Mount Ampato in the Andes Mountains of Peru at an altitude of over 20,000 feet. She was sacrificed by Inca priests nearly 500 years ago.

The Inca called their empire Tahuantinsuyu, or Land of the Four Quarters. It stretched 2,500 miles from Quito, Ecuador, to beyond Santiago, Chile. Within its domain were rich coastal settlements, high mountain valleys, rain-drenched tropical forests and the driest of deserts. The Inca controlled perhaps 10 million people, speaking a hundred different tongues. It was the largest empire on earth at the time. Yet when Pizarro executed its last emperor, Atahualpa, the Inca Empire was only 50 years old.

The true history of the Inca is still being written. According to one story, four brothers emerged from Lake Titicaca. During a long journey, all but one disappeared. Manco Capac survived to plunge a golden staff into the ground where the Rios Tullamayo and Huantanay meet. He founded the sacred city of Cuzco.

The Sacred City of Cuzco

Cuzco is nestled in a mountain valley 10,000 feet above sea level. It formed the center of the Inca world. The first emperor, Pachacuti transformed it from a modest village to a great city laid out in the shape of a puma. He also installed Inti, the Sun God, as the Incas’ official patron, building him a wondrous temple.

And he did something else — which may explain the Inca’s sudden rise to power. He expanded the cult of ancestor worship. When a ruler died, his son received all his earthly powers — but none of his earthly possessions. All his land, buildings, and servants went to his panaqa, or other male relatives. The relatives used it to preserve his mummy and sustain his political influence. Dead emperors maintained a living presence.

A new ruler had to create his own income. The only way to do that was to grab new lands, subdue more people, and expand the Empire of the Sun. 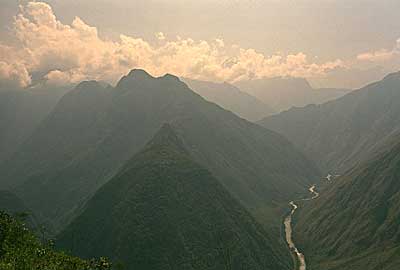 From the heights of Machu Picchu, the entire Urabamba Valley in the Andes Mountains can be seen.

How was this done? Life in traditional Andean villages was fragile. One married couple would help another planting or harvesting crops. They would receive help in their own fields in return. The Inca tailored this practice of reciprocity — give-and-take — to their own needs.

Their cities centered on great plazas where they threw vast parties for neighboring chiefs. Festivities continued for days on end, sometimes lasting a month. Dignitaries were fed, and given gifts of gold, jewels, and textiles. Only then would the Inca make their requests for labor, to increase food production, to build irrigation schemes, to terrace hillsides, or to extend the limits of the empire.

The Inca were great builders. They loved stone — almost as much as they revered gold. At magical Machu Picchu, a frontier fortress and a sacred site, a mystic column, the hitching post of the Sun, is carved from the living rock. Another slab is shaped to echo the mountain beyond. 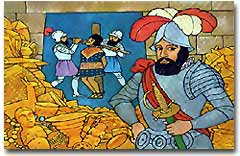 Spanish leader Francisco Pizarro captured and ransomed the last Inca emperor, Atahuallpa, for 24 tons of gold worth $267 million today. After receiving the ransom from the Inca people, the conquistadors strangled Atahuallpa anyway.

Temples and fortifications at Machu Picchu were constructed from vast, pillowy boulders, some weighing 100 tons or more. Constructed without mortar, the joins between them are so tight as to deny a knife-blade entry. A vast labor force was required. There are records of 20 men working on a single stone, chipping away, hoisting and lowering, polishing it with sand, hour-by-hour for an entire year.

A network of highways allowed Inca emperors to control their sprawling empire. One ran down the spine of the Andes, another along the coast. Inca builders could cope with anything the treacherous terrain required — steep paths cut along mountain sides, rope suspension bridges thrown across steep ravines, or treacherous causeways traversing floodplains. Every mile and a half they built way stations as resting points. Bands of official runners raced between them covering 150 miles a day. A message could be sent 1200 miles from Cuzco to Quito in under a week. 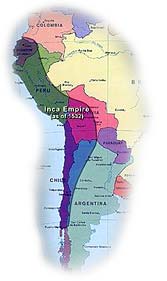 The Inca Empire ranged 2,500 miles from Ecuador to southern Chile before its destruction at the hands of Spanish conquistadors in 1532.

Everyone was expected to contribute to the empire. Land was divided in three. One third was worked for the emperor, one third was reserved for the gods, and one third the people kept for themselves. All were required to pay taxes as tribute.

The Inca could not write. Tax collectors and bureaucrats kept track of things with quipu, knotted strings. Varying lengths, colors, knot-types, and positions, enabled them to store enormous quantities of information.

Despite its glory, the Incas was a brittle empire, held together by promises and threats. When Pizarro executed the last emperor, it rapidly collapsed. Catholic priests demanding allegiance to a new Christian god soon replaced the Children of the Sun. As they had for thousands of years, the hardy peoples of the Andes adapted. They took what they must from their new masters, and held onto as many of their old ways as they could.