1a. Archaeologists and Their Artifacts 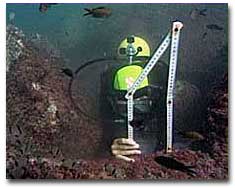 Spending sun-scorched days digging through the desert sands isn’t the only life for an archaeologist. There are ancient treasures to be found hidden amidst the plant and sea life on the ocean floor.

“Archaeology is the science of rubbish.” -archaeologist Stuart Piggot

The Forma Urbis Romae may just be the world’s biggest jigsaw-puzzle. Carved across marble slabs 45 feet high and 60 feet long, it is a map ancient Rome showing every street, building, room, and staircase. Eighteen-hundred years ago it hung in the Roman census bureau, the most detailed map of the city ever produced.

At least, it used to be. Today it languishes in the basement of a museum, smashed. Now a team of American researchers have devised a novel way of pasting it together again — by scanning it into a computer.

For hundreds of years after the fall of Rome, hunks of marble were hacked off the map for building material. Then the building housing the map collapsed. In 1562, Cardinal Alessandro Farnese made a valiant attempt to collect the surviving sections. Since then every attempt to piece together the 1,163 fragments has failed. It is one of classical archaeology’s great unsolved problems. 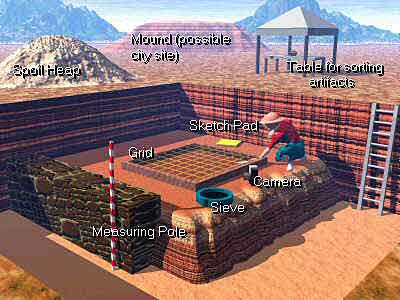 This mock-up of an archaeological dig site gives an impression of what the important elements and basic tools are. Even in this age of computers and x-rays, archaeologists still have to use basic methods like digging and measuring to insure that they collect the best information possible.

The first task of the American researchers was simple: 3-D scan each individual block into their computer. Now it gets harder. The computer must find a way to fit them together. So far the data base contains “8 billion polygons and 6 thousand color images, occupying 40 gigabytes.” Solving the puzzle, says the team, “will take months, possibly years.”

You come across a buried staircase that leads down into the desert. You open the first doors you see — they lead to a long passageway and an antechamber. Thieves have ransacked it. But there are other doors, undisturbed for centuries. You press your ear to the door. All is silent. You reach for the handle…

This approach is light-years away from the traditional methods of archaeologists who spend their time carefully sifting through the dirt. But today a battery of new tools is helping to bring the past back to life.

Archaeology, notes one of its practitioners, “has a long disreputable line of descent; its ancestors were, quite literally, grave robbers and adventurers.” Foremost amongst them ranks the Italian Giovanni Belzoni. In the early 1800s he looted hundreds of ancient Egyptian tombs, candidly admitting: “The purpose of my researches was to rob the Egyptians of their papyri.” Papyri were the ancient papers of the Egyptians. They were made from a plant that grew along the Nile valley.

Modern archaeologists proceed with more caution. Still, few can claim the delicacy of Sir Leonard Woolley, who in the 1920s excavated the great Sumerian city of Ur. While digging in the royal cemetery he noticed a small hole just below where a small gold cap and some gold nails had been found. Woolley filled the hole with liquid plaster. When the soil was cleared away, the shaft of a lyre — preserved as a plaster cast — emerged. Woolley was able to reconstruct the entire instrument, even though its original wood had long since vanished. 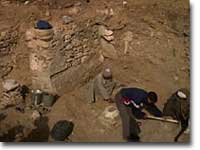 Digging takes up a lot of time in archaeology. Before artifacts can be interpreted, they have to be dug up! Often times, local people are employed to help with the basic chores around a dig, as in this Egyptian dig site.

You Want a Date?

Before starting a dig the first step is to map a site, dividing it into small squares. Careful notes are kept of changes in sediment, and of each object (however fragmentary) found within each square. The idea is to create a 3-D picture of the area — a picture through time. Younger remains usually lie closer to the surface, older ones beneath. Fortunately, archaeologists no longer have to rely on position alone for judging an object’s age.

In the late 1940s, the physicist Willard Libby invented C-14 (radiocarbon) dating. It transformed the study of the past. For the first time organic material — charcoal, wood, shell and bone, even clothing — from 500 to 50,000 years old could be reliably dated. Through radiocarbon dating, archaeologists built a world-wide chronology of human activity.

Carbon exists in the atmosphere in two forms — ordinary carbon, C-12; and carbon-14. This is radioactive and decays with a half-life of 5730 years (it takes 5730 years for half of the C-14 in a sample to become C-12). Plants and animals contain carbon in the same mixture as the atmosphere. When they die, C-14 continues to decay. By measuring how much — or, rather, how little — C-14 remains, researchers can calculate how much time has elapsed since death occurred.

There are traps, of course. An object may be contaminated by carbon from another source. Or, it may not “belong” at the level where the carbon-containing material was found. Perhaps it was carried there by erosion, or dislodged by a careless archaeologist. It happens. All this allows archaeologists to go on arguing about ages, for ages. 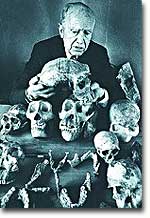 Raymond Dart’s discovery of the Taung child in 1925 overturned the theory that humans originated in Asia.

How do archaeologists know where to dig? Often they don’t. They know where not to dig — where nothing interesting exists. But how do you tell one from the other? Excavation is expensive, and there is nothing an archaeologist likes less than staring at an empty hole. The ideal solution is to look underground before you start. Astonishingly, techniques are coming along to do just that.

Most archaeologists rely on buried buildings, bodies, ancient hearths, or iron tools, having different physical “signatures” from the surrounding soil. Ground penetrating radar, for example, pumps radio waves into the earth then measures the patterns reflected back. For example, by coupling his scanner to a special computer program anthropology professor Lawrence B. Conyers has produced striking images of otherwise invisible structures. One day, he promises, he will generate moving 3-D pictures and take us on underground video “tours” of archaeological sites.

The great English archaeologist Sir Mortimer Wheeler used to remind his students, “The archeologist is not digging up things, he is digging up people.” Regardless of the changes in methods, archaeological aims remain the same: to illuminate the past and bring back to life the experiences and cultures of people long gone.