2b. Food, Clothing and Shelter

2b. Food, Clothing and Shelter 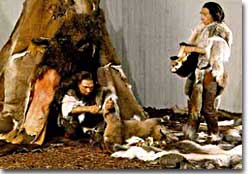 Could you survive in the wild? TV shows like “Gilligan’s Island” and “Survivor” and books and movies like “Lord of the Flies” ask this question. Small groups of people are set down on a deserted island and left to fend for themselves. They have none of the things we take for granted, such as easy access to food, shelter, clothing, or video games. There are no cities, no roads, no tools, no doctors, no computers — and no malls.

In part, these shows are so compelling because it is interesting to ponder how each one of us would do in such a setting. Could you create tools, make rules, gather food, or work with wood? Could you weave clothes, protect your toes, fight off a beast, or know which direction is east?

Now take yourself back 20,000 years. For Neanderthal Man, each and every day was a challenge. What was life like for Neanderthals? How did early humans find food, make clothing, and seek shelter?

The first fossil of this type was found in 1856 near Germany’s Neander Thal. At that time, “thal” was the word for “valley” in German. The find became known as Neanderthal Man — named after the place where it was found.

In the early part of the 1900s, Germans began regularizing the spelling of many words. They changed the spelling of words to reflect their pronunciation. “Thal” is pronounced “täl” in German, so the “h” was dropped in the spelling of the word. Today, most scientists continue to use the “Neanderthal” spelling, while others have adapted to “Neandertal.” In either case, the word is pronounced: “nee-an-der-täl.”

Appropriately, the word “Neander” translates to “new man” in Greek. 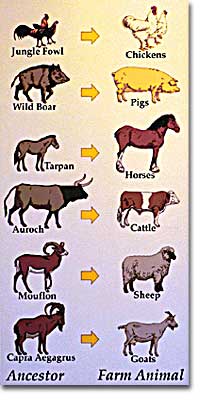 Modern day farm animals were pretty different from the original wild animals. Find out where the horse and the chicken came from.

Before answering these questions, it will be useful to understand how we know what we know about early hominids. Hominids are from the family homidiane, and refer to primate mammals who could stand on two legs. We are hominids as were our ancestors, including Java Man, Neanderthal Man, Beijing Man, and Lucy.

When studying humans, historians strongly rely on written records to gather information about the past. History, as it pertains to mankind, is said to begin with the invention of writing, about 5,000 years ago.

But humans lived long before the invention of writing. Prehistory refers to this long time period before writing was invented. How do we know what life was like if there were no written records of prehistory? Anthropologists and archaeologists work together with other scientists in answering this question. They use artifacts and fossils — clues from ancient times. After testing and analyzing them, educated conclusions are made about life in prehistoric times. Some of the conclusions are wrong, some are somewhat correct, and others may be entirely correct. Some theories will change as the next generations of scientists and historians glean more information.

Imagine yourself digging through a stranger’s trash. You can draw some conclusions about his or her life based on what you find. While archaeologists don’t exactly dig through trash, they do sift through fossil remains and artifacts and try to explain things. 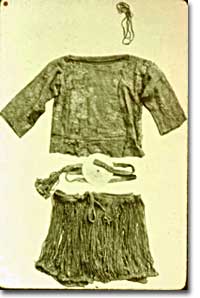 This outfit of linen string was typical fashion in the region surrounding Denmark from 600,000 to 50 B.C.E.

Prehistory is divided into different time periods. The use of stone tools by early people led historians to apply the name Stone Age to the period before writing became established.

The Paleolithic, or Old Stone Age, began about 4.5 million years ago and lasted until about 8000 B.C.E. Many anthropologists believe that creatures vaguely resembling Homo sapiens (that’s us today) may have lived at the onset of the Stone Age.

The Neolithic, or New Stone Age, lasted from 8000 B.C.E. until approximately 3000 B.C.E. By the end of this era, villages and farms had come into existence.

Scientists believe that the earliest hominids may have used caves as shelters. They probably ate vegetables and gathered seeds, fruits, nuts and other edible plants. Later, scientists speculate, meat was added to the diet as small animals were hunted. Eventually, humans hunted large animals.

In order to hunt successfully, early men had to work together. As humans became successful hunters, they migrated over great distances in search of food. For nearly a million years, however, periods of extremely cold weather during the Ice Age limited the areas to which early people could migrate. Prehistoric people learned how to use fire and make warm clothing in response to this cold climate. 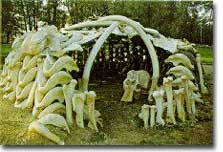 Mammoth bones were used to construct huts in Siberia during prehistoric times. Structures such as this one, reconstructed in France, were covered with hides and carpeted with mammoth fur.

In 1856, human remains were found in the Neander Valley of Germany. This is where the Neanderthal people lived some 60,000 years ago. They had stocky builds, heavy jaws, thick eyebrow ridges, and large noses. Unlike hominids who came before them, they made efficient tools and wore heavy clothing made of animal skins.

Most Neanderthals lived in groups of 50 people. Some may have dwelled in open-air camps along the shores of lakes and rivers. They cared for their sick and aged and may have been the first to practice a primitive form of medicine.

The Cro-Magnons were one of the earliest Homo sapiens. They lived in Europe and lived after the Neanderthals. They lived inside cave entrances while others built huts in forested areas. Long houses made of stone blocks were also used for communities of 30-100 people. Hunting weapons which allowed for a safe distance, such as the spear and bow, were used to hunt the woolly mammoth and bison.

How did early Homo Sapiens such as Cro-Magnons compare with humans of today? In essence, we are brainier and they were brawnier. But the similarities, despite the passage of thousands of years, are striking.