2c. A Page Right Out of History

2c. A Page Right Out of History 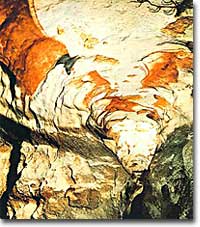 The Lascaux Cave paintings, discovered in 1940 in France, are generally regarded as the best examples of prehistoric art.

Because there was no written language 50,000 years ago, we do not have much information on how a “modern stone age family” lived, what they ate, where they lived, what they wore, or even what they looked like. Like Fred Flintstone, did they have leopardskin suits, go barefoot, and use a boulder for a bowling ball?

Archaeologists and anthropologist who study this time period do have artifacts upon which they can begin to draw some conclusions. Techniques like carbon dating can help scientists determine the age of objects and bones. Large human skulls, body bones, animal skeletons, cave paintings, and scientific ideas on ancient climate patterns allow scientists to draw a picture of what life may have been like for primitive people. 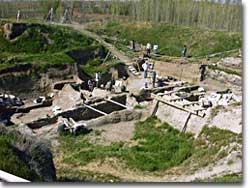 Archaeologists excavate artifacts at Çatal Hüyük. This Turkish site is one of the oldest human settlements to be discovered.

Let’s start our evolutionary journey with homo habilis, the nearly two million year old discovery of the Leakey family. Digging in Africa’s Olduvai Gorge the Leakeys found Nutcracker Man, who shared many traits with humans of today. Nutcracker had a giant skull dominated by a wide face, big cheekbones, and bulging facial muscles. The skull also had enormous teeth — its molars are four times the size those of present humans.

What about brains? Paleoanthropologists have determined that the cranial capacity of the Nutcracker was nearly 50% larger than Lucy’s. Nutcracker also had hands that began to look like ours.

How was Nutcracker different from us? Nutcracker was a hairy fellow and walked hunched over. Nutcracker wasn’t all that smart either — our brains have far higher capacity. But because Nutcracker’s teeth, hands, and brain power, he was proclaimed a new species Homo Habilis and in 1970 was accepted by scientists as an early member of the human family.

Neanderthals mark the transition to early modern man. Homo sapiens neanderthalensis had a brain larger than many human brains today. While his brain was large, his intelligence was limited. 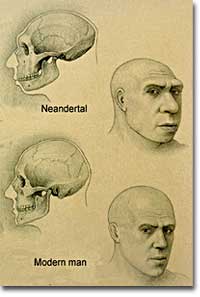 Neanderthals had a more pronounced brow ridge and sloped forehead than that of modern man. Their large nasal passages allowed them to warm cold air more quickly while breathing, an adaptation to the cold climate in which they thrived.

The Neanderthals, who lived from 30,000-100,000 years ago, did things that we think only modern humans do. For instance, they cared for their sick. One skeleton is that of a man who was 40 years old. His bones showed that he suffered from severe arthritis and had lost most of his teeth. It would have been almost impossible for him to survive unless someone had cared for him. And even a Neanderthal needed caring. Neanderthals often lived in freezing temperatures amidst hostile animals and endured many severe physical ailments.

They are the first group we know who buried their dead. The dead were buried with tools, weapons, and food. We assume they expected these items to be useful in the afterlife. It is possible these were the first to believe in a god or gods.

Neanderthals seem somewhat familiar to us, because they did things we can understand. They lived in caves, wore clothing made of animal skins, and used fire. They also may have been the first people to cook their food in order to thaw it in their frigid environment. They may have even played music. An 80,000 year-old bone was found to produce musical tones of the diatonic scale (“do, re, mi, fa”).

What did Neanderthals look like? They had a very strong build, powerful jaws, sharply receding chins, low foreheads, and heavy eyebrow ridges. Chances are you would not want to date one.

According to Dr. Tim White, an anthropologist at the University of California, Neanderthals and those who lived before them practiced cannibalism, or eating fellow humans. Some Neanderthal skulls show cuts consistent with cannibalism. Human bones from 800,000 years ago that were found in Atapuerca, Spain, had cut marks that were stripped of their flesh.

Neanderthal disappeared without a trace at about the time of the appearance of the Cro-Magnon people — around 30,000 to 35,000 years ago.

Cro-Magnons are homo sapiens (man with wisdom) just as we are. They lived mostly in southern France and Northern Spain. They have stirred our imagination in part because of their elaborate cave paintings in places such as Lascaux and Vallon-Pont-d’Arc in France. Paintings of bulls tossing their heads, wounded bison charging a hunter, herds of reindeer escaping and schools of swimming trout and salmon were just some of the pictures that we can still see today.

From these paintings, we know that hunting was important. One group of people, the Magdalenians, left ample evidence about their hunting practices. They lived in France and Western Europe some 15,000 years ago. To get close to the herds of animals, they dressed in animal skins and antlers. Groups of hunters worked together in a variety of ways to get their meat, killing not just one animal at a time, but often a whole herd. They would surround their quarry in the open, stampede them over cliffs, or even herd them into natural corrals. There the hunters easily killed the animals by stabbing them with lances or piercing them with spears, which they had carefully carved with harpoon-like tips. The biggest animals were sometimes driven into pits, falling upon a trap of sharpened stakes.

With high, arched foreheads, well-defined chins, and small brow ridges, Cro-Magnon people looked somewhat like you and me. They lived on earth for thousands of years. For some unknown reasons — scarcity of food, perhaps — they were gone by the end of the Paleolithic period.

As a result of the Neolithic Revolution, humans were forced to settle in one place permanently in order to grow food. Shown here is an example of early Neolithic settlement; the remnants of an early village in Jordan.

People living in Africa and advances in agriculture sparked the beginning of the Mesolithic Age or Middle Stone Age. This period lasted from 12,000 till about 10,000 years ago in Africa and Asia, although this date varies according to region. Raising crops for food signifies the beginning of a new way of life for people.

The Neolithic Age or New Stone Age was revolutionary. About 10,000 years ago people learned to make better tools and weapons, establish permanent villages and domesticate animals for food and work. They were beginning to live like “modern” people.

This “Neolithic or Agricultural Revolution,” did not happen overnight. It took several millennia after the first discovery of agriculture for people to form settled societies.

Jarmo in present day Iraq was one of the oldest. At 8750 years old this little town was home to 200 inhabitants. Catal Huyuk in present day Turkey was an even larger society with almost 3000 residents 8000 years ago.