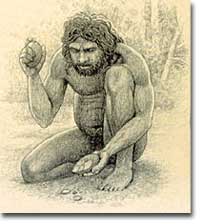 People of the Stone Age did not have the luxury of turning on the TV and watching Tim “Rock” Taylor host “Tool Time” or Bob Vilastone giving home-building tips in “This Old Cave.” Nor could they dial 911 when a fire threatened them. Rather, they had to invent tools and harness the power of fire. But it was their experiments in tool-making that ultimately led to TV, cell phones, and computers.

Living in the computer-driven Information Age, we don’t necessarily think of fire or tools as technologies. But by definition technology refers to the “practical application of knowledge in a certain area.” Learning how to tame and use fire proved an invaluable technological advance in human development.

Uncontrolled fire terrified our ancestors and still has the power to terrify today. Forest fires, or houses being burnt to the ground are still vexing problems. However, take time to think of all of the practical uses of fire or its subsequent substitutes. Where would we be today without it? What was its importance to early people?

There is heavy debate as to exactly when humans first controlled the use of fire. If early humans controlled it, how did they start a fire? We do not have firm answers, but they may have used pieces of flint stones banged together to created sparks. They may have rubbed two sticks together generating enough heat to start a blaze. Conditions of these sticks had to be ideal for a fire.

The earliest humans were terrified of fire just as animals were. Yet, they had the intelligence to recognize that they could use fire for a variety of purposes. Fire provided warmth and light and kept wild animals away at night. Fire was useful in hunting. Hunters with torches could drive a herd of animals over the edge of a cliff.

People also learned that they could cook food with fire and preserve meat with smoke. Cooking made food taste better and easier to swallow. This was important for those without teeth!

The early humans of 2 million years ago did not have fire-making skills, so they waited until they found something burning from a natural cause to get fire. A nightly campfire became a routine. What was once comfort and safety, was now also a social occasion. People would collect around the fire each night to share stories of the day’s hunt and activities, to laugh and to relax.

The earliest evidence found in Swartkrans, South Africa and at Chesowanja, Kenya Terra and Amata, France suggests that fire was first used in stone hearths about 1.5 million years ago. 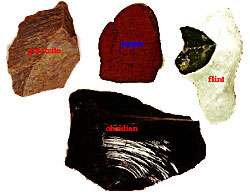 Some of the preferred materials to make tools and weapons included obsidian, flint, quartzite, and jasper because they could easily be shaped.

Archaeologists have found Stone Age tools 25,000-50,000 year-old all over the world. The most common are daggers and spear points for hunting, hand axes and choppers for cutting up meat and scrapers for cleaning animal hides. Other tools were used to dig roots, peel bark and remove the skins of animals. Later, splinters of bones were used as needles and fishhooks. A very important tool for early man was flakes struck from flint. They could cut deeply into big game for butchering.

Cro-Magnons, who lived approximately 25,000 years ago, introduced tools such as the bow and arrow, fishhooks, fish spears and harpoons that were constructed from bones and antlers of animals. Logs were hollowed out to create canoes. Crossing rivers and deep-water fishing became possible.

Advances in tool-making technology led to advances in agriculture. And farming revolutionized the world and set prehistoric humans on a course toward modernity. Inventions such as the plow helped in the planting of seeds. No longer did humans have to depend on the luck of the hunt. Their food supply became much more certain. Permanent settlements were soon to follow. Animals were raised for food as well as to do work. Goats, for instance, were sources of milk and meat. Dogs were used to aid in hunting wild animals.

Modern, civilized societies began to emerge around the globe. Human life as we know it started to flourish.