3a. Life along the Nile

3a. Life along the Nile 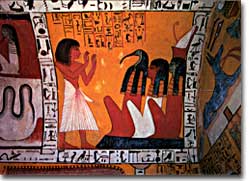 The ancient Egyptian writing system, hieroglyphics, was advanced by 3100 B.C.E. The complex system included numbers and an alphabet as well as other symbols.

None of the achievements of the remarkable ancient Egyptian civilization would have been possible without the Nile River. There is always a connection between landscape and how a people develop. It does not take the wisdom of a sphinx to understand why.

Archaeologists and historians don’t know exactly how Egyptian civilization evolved. It is believed that humans started living along the Nile’s banks starting in about 6,000 B.C.E. For the earliest inhabitants of the Nile Valley food was not easy to find. There were no McTut’s selling burgers, and, though there were a lot of crocodiles, those critters were pretty hard to catch.

Over time, however, despite being in the midst of desert surroundings, people discovered that the Nile River provided many sources of food. Along the river were fruit trees, and fish swam in the Nile in great numbers. 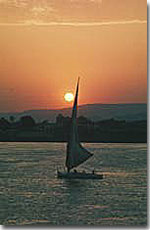 The Nile — the longest river in the world at 4,187 miles — defines Egypt’s landscape and culture. A common Egyptian blessing is “May you always drink from the Nile.”

Perhaps most importantly, they discovered that, at the same time each year, the Nile flooded for about six months. As the river receded, it deposited a rich, brown layer of silt that was suitable for growing wheat, beans, barley, or even cotton. Farmers learned to dig short canals leading to fields near the Nile, thus providing fresh water for year-round irrigation. Planting immediately after a flood yielded harvests before the next year’s flood.

In order to know when to plant, the Egyptians needed to track days. They developed a calendar based on the flooding of the Nile that proved remarkably accurate. It contained a year of 365 days divided into 12 months of 30 days each. The five extra days fell at the end of the year.

Here’s a problem that the sphinx might have trouble answering: how did the ancient Egyptians make their calendars? What material did they use? Remember, there was no paper. Need a clue? Take a dip in the Nile.

Large reeds called papyrus grew wild along the Nile. The Egyptians developed a process that turned these reeds into flattened material that could be written on (also called papyrus). In fact, the English word “paper” has its root in the ancient Greek word “papyrus.” Among the first things written on papyrus were calendars that tracked time.

Papyrus had many other uses. Boats were constructed by binding the reeds together in bundles. Baskets, mats, rope, and sandals were also fashioned from this multipurpose material. 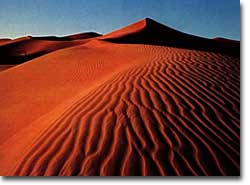 The Sahara, the world’s largest desert, encroaches on the western shore of the Nile River. Other deserts lie to the Nile’s east. Egypt’s location within the world’s driest region helped protect it from invaders throughout the centuries.

Even today, the world around the Nile is quite barren. Outside of the narrow swath of greenery next to the river, there is sand as far as the eye can see. To the Nile’s west exists the giant Sahara Desert, the largest desert in the world.

And, as if there weren’t enough sand in the Sahara, east of the Nile are other deserts.

Although sand had limited uses, these deserts presented one tremendous strategic advantage: few invaders could ever cross the sands to attack Egypt — the deserts proved too great a natural barrier.

After learning to take advantage of the Nile’s floods — and not having to fear foreign attacks — the Egyptians concentrated on improving farming techniques. As the years passed, Egyptians discovered that wheat could be baked into bread, that barley could be turned into soup (or even beer), and that cotton could be spun into clothing.

With many of life’s necessities provided, the Egyptians started thinking about other things, such as art, government, religion, and philosophy — some of the basics needed to create a civilization. Eventually, pyramids, mummies, Cleopatra, and the Sphinx of Giza became touchstones of this flourishing culture.