Egyptian society was structured like a pyramid. At the top were the gods, such as Ra, Osiris, and Isis. Egyptians believed that the gods controlled the universe. Therefore, it was important to keep them happy. They could make the Nile overflow, cause famine, or even bring death.

In the social pyramid of ancient Egypt the pharaoh and those associated with divinity were at the top, and servants and slaves made up the bottom.

The Egyptians also elevated some human beings to gods. Their leaders, called pharaohs, were believed to be gods in human form. They had absolute power over their subjects. After pharaohs died, huge stone pyramids were built as their tombs. Pharaohs were buried in chambers within the pyramids.

Because the people of Egypt believed that their pharaohs were gods, they entrusted their rulers with many responsibilities. Protection was at the top of the list. The pharaoh directed the army in case of a foreign threat or an internal conflict. All laws were enacted at the discretion of the pharaoh. Each farmer paid taxes in the form of grain, which were stored in the pharaoh’s warehouses. This grain was used to feed the people in the event of a famine.

The Chain of Command 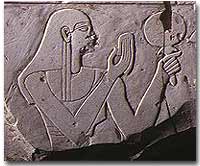 Ancient Egyptian royalty, nobility, and clergy enjoyed lives of wealth and comfort while farmers and slaves struggled to subsist.

No single person could manage all these duties without assistance. The pharaoh appointed a chief minister called a vizier as a supervisor. The vizier ensured that taxes were collected.

Working with the vizier were scribes who kept government records. These high-level employees had mastered a rare skill in ancient Egypt — they could read and write.

Right below the pharaoh in status were powerful nobles and priests. Only nobles could hold government posts; in these positions they profited from tributes paid to the pharaoh. Priests were responsible for pleasing the gods. 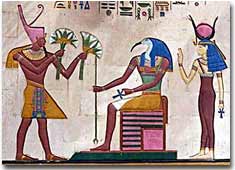 Religion was a central theme in ancient Egyptian culture and each town had its own deity. Initially, these deities were animals; later, they took on human appearances and behaviors. Seated here is Thoth, the god of learning and wisdom, carrying a scepter symbolizing magical power.

Nobles enjoyed great status and also grew wealthy from donations to the gods. All Egyptians — from pharaohs to farmers — gave gifts to the gods.

Soldiers fought in wars or quelled domestic uprisings. During long periods of peace, soldiers also supervised the peasants, farmers, and slaves who were involved in building such structures as pyramids and palaces.

Naturally, there were people needed to buy goods from artisans and traders. These were the merchants and storekeepers who sold these goods to the public.

The Bottom of the Heap

At the bottom of the social structure were slaves and farmers. Slavery became the fate of those captured as prisoners of war. In addition to being forced to work on building projects, slaves toiled at the discretion of the pharaoh or nobles.

Farmers tended the fields, raised animals, kept canals and reservoirs in good order, worked in the stone quarries, and built the royal monuments. Farmers paid taxes that could be as much as 60 percent of their yearly harvest — that’s a lot of hay!

Social mobility was not impossible. A small number of peasants and farmers moved up the economic ladder. Families saved money to send their sons to village schools to learn trades. These schools were run by priests or by artisans. Boys who learned to read and write could become scribes, then go on to gain employment in the government. It was possible for a boy born on a farm to work his way up into the higher ranks of the government. Bureaucracy proved lucrative.