Do not try this at home. From purification to dehydration — nine quick steps to mummification. And don’t forget to discard the brains. 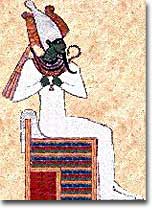 Legend claims that Osiris taught agriculture to the ancient Egyptians. After being murdered by his brother Seth, Osiris became even more influential as ruler over both the dead and the underworld.

A dead noble stands trembling in the Hall of Truth. Behind the noble, Horus, the half-falcon, half-man ruler of Earth, unleashes a piercing stare at the quivering man. Thoth, the sharp-beaked, ibis-headed deity of scribes, sharpens his quill — poised to record a verdict of divine judgment.

Seated before the noble on a golden throne is Osiris, the king of the dead. Upon his head rests a glittering crown with a gorgeous white feather plume on either side. Behind Osiris stands Isis, the revered goddess of nature, who is responsible for bringing the dead earth back to life each year. She holds an ankh, a cross with a loop above the bar. An ankh guarantees that a dead person will live forever.

The noble wonders if he will live forever. Or will he be fed to the hideous crocodilelike god called the Eater of the Dead and forever cease to exist. (How can the noble wonder about all this if he’s already dead? The noble is actually in limbo, a place where the souls of dead people go while being judged.)

Osiris begins the process of judging the noble’s life. On one side of a scale, Osiris places the heart of the noble, which bares the secrets of the soul. Had the soul lied, cheated, or lived an evil life? The soul defends itself before a variety of interrogating gods.

Thought to be the oldest surviving medical text (1600 B.C.E.), the Edwin Smith Papyrus explains the treatment of wounds in Egyptian medicine. What important organ does this hieroglyphic spell out?

The noble thinks about his second self, called the ka. The ka lives within every human being. When the physical body expires, the ka goes on to enjoy eternal life, where it can hunt, fish, live with its family, be entertained, and eat favorite foods.

Now Osiris holds up the sacred feather, the emblem of truth, and places it on the other side of the scale. If the scales balance, eternal life awaits. If not, the Eater of the Dead has his favorite food for lunch: noble.

Alternate names are in (parentheses). Some of the duties and animals of the Egyptian gods overlapped. The gods listed below were most popular during the Age of the Pyramids.

Before being judged by Osiris, the noble’s soul had undertaken a journey that lasted over two months. When the noble died he was brought to the Beautiful House, where an embalmer (often a priest with knowledge of rituals, wrapping, and anatomy) prepared the body to cross to the afterlife.

Egyptians believed that the afterlife would be much like life on Earth and that the soul would want use of its body in eternity. That’s why Egyptians made an art out of mummification, or the preservation of the dead.

The process of embalming took great skill and required many steps. What follows is a crash course on Egyptian embalming technique.

This is an example of an Egyptian coffin made of wood, painted, then gilded. Created during the Ptolemaic Period (305-30 B.C.E.), the lid is adorned with images from the Book of the Dead, a text believed to lead the dead into the lands of Osiris, the god of the underworld.

Finally, the time has come to entomb the mummy. Jewelry, games, furniture, food, clothing, and cosmetics might be entombed with the corpse. These things would be used in the afterlife. The Book of the Dead, a collection of hymns and prayers, might also be included in the tomb to protect the body on its journey to the realm of the dead.

So how did the noble fare before the great Osiris? Ask his mummy.