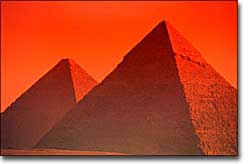 Built in 30 years, the Pyramid at Giza was the tallest building in the world until the beginning of the 20th century. It remains as the last of the Seven Wonders of the Ancient World.

For centuries, they were the tallest structures on the planet. The Pyramids of Giza, built over 4,000 years ago, still stand atop an otherwise flat, sandy landscape.

One of the Seven Wonders of the World, the pyramids defy 21st-century humans to explain their greatest secrets. How could a civilization that lacked bulldozers, forklifts, and trucks build such massive structures? Why would anyone have spent the time and energy to attempt such a task? What treasures were placed inside these monuments? 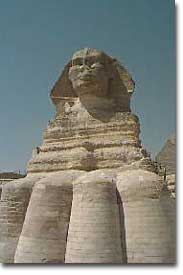 Accompanying the Pyramids of Giza is, the Sphinx, a gigantic figure of a lion with the head of a pharaoh.

Only a powerful pharaoh could marshal the necessary human resources to build giant pyramids. During the flood seasons, farmers became builders. Huge stone blocks averaging over two tons in weight were mined in quarries and transported to the pyramid site.

Egyptologists theorize that the workers used either rollers or slippery clay to drag the blocks from the quarries to their eventual placement on the pyramid. Construction of the larger pyramids took decades.

Pyramids were built for religious purposes. The Egyptians were one of the first civilizations to believe in an afterlife. They believed that a second self called the ka lived within every human being. When the physical body expired, the ka enjoyed eternal life. Those fortunate enough to pass the test of Osiris wanted to be comfortable in their lives beyond earth. The Great Pyramids were simply grand tombs of powerful pharaohs.

Three pyramids were built at Giza, and many smaller pyramids were constructed around the Nile Valley. The tallest of the Great Pyramids reaches nearly 500 feet into the sky and spans an area greater than 13 acres. The Great Sphinx was sculpted nearby to stand watch over the pyramids. It stands 65 feet tall and consists of a human head atop the body of a lion.

Many believe that the Sphinx was a portrait of King Chefren (Khafret), who was placed in the middle Pyramid. The lion symbolized immortality.

You Can Take It with You

Egyptians who ranked high in status often wanted to take their most prized possessions with them in death, so the ka could enjoy them in its next life. Gold, silver, and bronze artifacts were loaded into the interiors of the great tombs. Fine linens and artwork adorned the secret chambers.

In the early days, dead nobles were often interned with their living slaves and animals. Because this practice eventually proved too costly, artists instead depicted scenes of human activity on the inside walls. Some pyramids were even equipped with a rest room for the pharaoh. 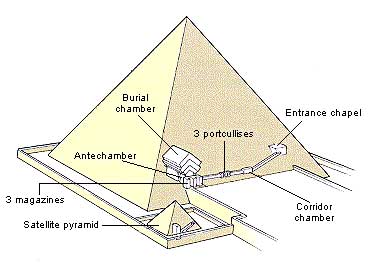 Inside pyramids such as this one for King Pepi I, passageways lead to a main burial chamber. Designs varied for each pyramid.

Great precautions were taken to protect the tombs from looters. Egyptians believed that a defiler of a pharaoh’s resting place would be cursed for eternity. The entrance to the inner chambers was carefully hidden. The pharaoh’s mummy was placed in a huge coffin called a sarcophagus, which was made of the hardest known stone blocks. But despite such warnings and precautions, tombs were raided over the years by grave robbers.

The pyramids, however, have stood the test of time. Although their outer limestone layers have long since been stripped or passed into dust, the pyramids still stand. About 80 dot the horizons of modern Egypt. They remain as time capsules cast forward by a once-great civilization.