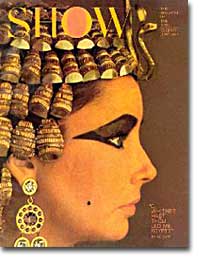 The actress Elizabeth Taylor portrayed Cleopatra in the 1963 Hollywood movie named after the famous Egyptian queen.

Women in ancient Egypt were ahead of their time. They could not only rule the country, but also had many of the same basic human rights as men.

One of the first women to hold the rank of pharaoh was Hatshepsut, who began her rule in about 1,500 B.C.E. Hatshepsut took care of her people and built temples to the gods as well as other public buildings. Egyptian custom dictated that a pharaoh, who was considered a god, could not marry a mortal. As a result, pharaohs chose spouses from within the royal family. Her husband, Thutmose, was her half brother.

Nefertiti was another Egyptian ruler. She married Amenhotep IV, who preached and supported monotheism, or the belief in only one god.

Found in the chapel of Merya at Armana, this drawing depicts Queen Nefertiti accompanying her husband, the pharaoh Akhenaton, from the royal palace to the temple. Because of exceptionally high status, Nefertiti rode in her own chariot.
The Hereditary Princess,
Great of Favor,
Mistress of happiness, 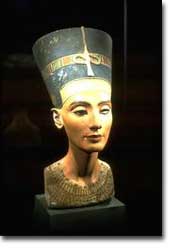 The bust of Nefertiti, the Queen of Egypt, is legendary for its beautiful and mysterious depiction of the queen during the Amarna period. This portrait was sculpted in the workshop of Thutmose in Akhet-Aton.

Gay with the two feathers,
At hearing whose voice one rejoices,
Soothing the heart of the King at home, 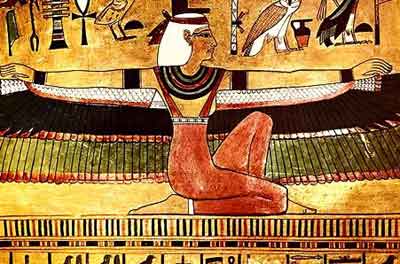 The Egyptian goddess Isis was one of the most important deities of the ancient world. Originally the goddess of motherhood and fertility, Isis became the mother of all gods and was worshipped throughout Egypt until the 6th century C.E.

Pleased at all that is said,
The great and beloved wife of the King,
Lady of the two lands, Neferfefruaten Nefertiti,
Living forever.

Cleopatra became the most famous of Egypt’s female leaders. She was extremely intelligent, and ambitious and spoke several languages — she even studied astronomy. At 18, she became queen of Egypt.

Romance and Tragedy in Cleopatra’s Court

Cleopatra constantly battled jealous, ambitious people who wanted to kill her and occupy her throne. For a time, she was removed from power and banished. She sought help from Julius Caesar, the leader of the powerful Roman Republic.

When Caesar visited Alexandria, a large Egyptian city, Cleopatra saw her chance. She could not even enter the city to see Caesar because her jealous brother hired spies to kill her on sight. Craftily, she sneaked into the city rolled in a carpet. She was brought to Caesar, and the two developed a relationship. The couple had a son named Caesarion, and Caesar helped her recapture the throne. The relationship ended abruptly when rival Roman rulers murdered Caesar in the Roman Senate.

I’m Dying to See You

When Marc Antony became leader of Rome, he too, fell in love with Cleopatra. The two had children and together ruled the most powerful empires of the Mediterranean. Eventually, a rival defeated Antony’s armies, and Antony drew a sword on himself in despair. As he was dying, he wanted to see Cleopatra one last time. He died in her arms. Later, Cleopatra killed herself by placing a poisonous snake on her chest. The greatest political soap opera of the age was now over.

These were examples of elite Egyptian women. But what about the common folk? A woman’s role as mother and wife still came first in Egyptian society. Some professions in which women worked included weaving, perfume making, and entertainment.

Egyptian women could have their own businesses, own and sell property, and serve as witnesses in court cases. Unlike most women in the Middle East, they were even permitted to be in the company of men. They could escape bad marriages by divorcing and remarrying. And women were entitled to one third of the property their husbands owned. The political and economic rights Egyptian women enjoyed made them the most liberated females of their time.