Symbols of the three religions that originated in the Middle East: Judaism, Christianity, and Islam.

“The cradle of civilization.”

Throughout the centuries, historians have used these powerful words to describe the Middle East.

In the ancient Middle East, many great civilizations rose and fell. The religions of Judaism, Christianity, and Islam each trace their origins back to this part of the world.

All of these civilizations arose in the area known as the Fertile Crescent. The Fertile Crescent stretches from the Mediterranean Sea in the west to the Zagros Mountains in the east. It is bordered in the north by the Taurus Mountains and in the south by the Persian Gulf and the Arabian Desert. Its shape resembles a crescent moon.

One area within the Fertile Crescent gave rise to the region’s most powerful empires and grandest cities. This area was Mesopotamia, the land between the Tigris and Euphrates Rivers.

From Farming to Empires 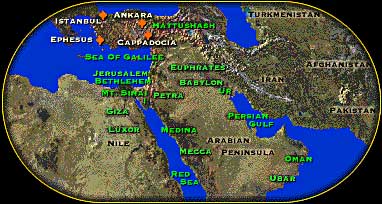 Many great civilizations arose from the first farming cultures of the Fertile Crescent.

The Fertile Crescent is the region in which humans first began farming and herding around 8,000 B.C.E. This dramatic change from nomadic hunting and gathering allowed early humans to settle into permanent villages and to begin accumulating a surplus of food.

With such a surplus, early villagers could begin to focus on developing the skills associated with civilization. Some of them became priests, scribes, merchants, artists, teachers, and government officials. They began to build cities, and before long, they were establishing empires. The Sumerians, Babylonians, Assyrians, Persians, and Phoenicians all built great empires, each of which rose to glory in the Middle East. 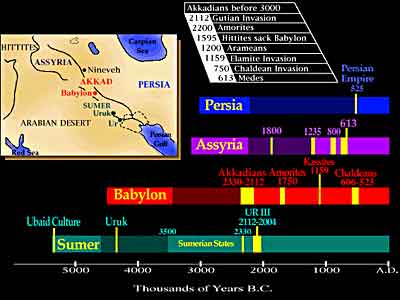 A timeline of Mesopotamia history, from the founding of Sumer to the beginning of the Common Era

Because they were constantly interacting through war and trade, the societies in the Middle East borrowed from each other. They modified newly acquired ideas and technologies to suit their own needs. Often, these changes were improvements. Over time, many aspects of various societies throughout the ancient Middle East began to resemble each other.

The Middle East is also the crossroads of the ancient world. It is located at the merging point of three continents: Europe, Africa, and Asia. Many travelers who journeyed from one continent to the next passed through the Middle East, absorbing its culture and introducing new ideas to the region. Throughout the centuries, its prized location became the source of conflict. Its goods became the source of envy.

And its ideas became the source of faith.