4a. Life in Sumer

4a. Life in Sumer 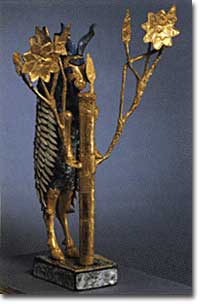 Courtesy University of Pennsylvania Museum of Archaeology and Anthropology

This beautiful artifact, called by archaeologists “Ram in the Thicket,” was squashed for 4,500 years or so before Sir Leonard Woolley excavated it from the Royal Cemetery at Ur in Mesopotamia. How did he know how to piece it together?

The first writing system. The plow. The sailboat. The first lunar calendar.

These accomplishments and more were the products of the city-states of Sumer, which arose on the flood plains of the Tigris and Euphrates Rivers in what is now modern-day Iraq. The Sumerians began to build their walled cities and make significant advances beginning around 3500 B.C.E.

Their domination of this region lasted until around 2000 B.C.E, when the Babylonians took control. Sumerian culture and technology did not disappear but were adopted by its conquerors.

Located in what the ancient Greeks called Mesopotamia, which literally means “the land between the rivers,” Sumer was a collection of city-states that occupied the southernmost portion of Mesopotamia. Most were situated along the Tigris and Euphrates Rivers, lying just north of the Persian Gulf.

Bordered by the Tigris and Euphrates Rivers, ancient Sumer was located in southern Mesopotamia. Mesopotamia is a Greek word meaning “between two rivers.”

The physical environment there has remained relatively the same since about 8000 B.C.E. The landscape is flat and marshy. The ground is primarily made up of sand and silt, with no rock. The climate is very dry, with only about 16.9 centimeters of rain falling per year. Natural vegetation is sparse, and no trees other than palm trees grow there. The rivers overflow their banks in the spring, sometimes violently and destructively. During this process, they deposit a rich layer of silt on the surrounding floodplain.

Considering the harsh and forbidding natural environment, how did the first civilization arise in Sumer? Surprisingly, the environment was part of what made civilization possible.

The silt carried by the rivers down from the northern mountains provided rich fertilizer for growing crops when the rivers overflowed. The constant sunshine was also good for crops. But without water, they would have easily dried up and died. Through the leadership of priest-kings, Sumerians organized farmers in each city-state to build extensive irrigation systems of canals and dams. Before long, the desert was blooming with a surplus of barley, dates, and other crops.

This surplus allowed many people to pursue occupations other than farming, while still being able to meet their basic needs. These people became artisans, merchants, and craftspeople. They helped build the cities and increase the wealth of the city-states through trade with neighboring societies.

Sumerians also developed high-quality crafts, evidence of which was found in the royal tombs of Ur, excavated by Sir Leonard Woolley in the 1920s. Trade also helped the Sumerians to secure vital items such as timber from Lebanon and luxury goods such as the semiprecious stone lapis lazuli from the Indus River Valley.

Gettin’ Ziggy with It

This clay plaque (c. 17th century B.C.E.) depicts what some archaeologists believe is the Sumerian goddess Inanna, patron deity of fertility. Makes you wonder who’ll find those Barbie dolls you buried in the backyard.

Because of the surplus grain, the government could grow in size to support numerous officials and priests. It could also pay thousands of workers with barley while they were building canals, city walls, and ziggurats or while they were fighting to defend their city-state or extend its influence over the region. The barley was collected as a tax from the farmers. Farmers were also required to give some time to the government to work on projects. Slaves and hired workers also contributed.

As the government and economy grew in size and complexity, officials and merchants required a sophisticated writing system to record transactions. First came number markings and simple pictograms, the writing system began to incorporate pictures representing a physical object or idea (such as a picture of the sun to represent the sun).

As trade and government activity increased, the writing system began to incorporate more abstract pictograms and phonograms, or symbols representing sounds. These new forms provided greater flexibility and speed in writing. They were adopted by other cultures (such as the Assyrians) who did not even speak Sumerian.

The Sumerians wrote on clay tablets, using a reed pen called a stylus. Once dried, these tablets became hard and, fortunately for today’s researchers, endured for millennia in the hot, dry climate.

Thousands of these tablets have been unearthed. Some libraries have even been discovered with over 10,000 of these clay tablets. And although the vast majority of these tablets contain records of goods collected and distributed by the governments and trade transactions, some contain myths, stories, and letters. These documents have provided much information about the culture and history of the Sumerian people.

With their ingenuity, the Sumerian people developed complex irrigation system and a written language. They were the first people to use the plow to lift the silt-laden soil of their crop fields and they invented the sailboat. They were the first people to design a calendar based on the phase of the moon and they developed a numerical system, based on the number 60, that is still used to measure seconds and minutes.

Gilgamesh was likely an actual king of Uruk in Babylonia who lived about 2700 B.C.E.Sumerians recorded stories and myths about Gilgamesh, which were written on clay tablets. The stories were combined into an epic tale. Versions of this tale were translated into other langauages including Akkadian, which was spoken by the Babylonians.

The fullest surviving version is derived from twelve stone tablets, in the Akkadian language, which were found stored in the famous library at Nineveh of Assyrian King Assurbanipal.

The epic relates the heroic deeds of Gilgamesh, who is the king of Uruk. His father is mortal and his mother is a goddess. Since Gilgamesh is part mortal, he knows he must die one day. However, he longs for immortality, whether through doing great deeds or discovering the secret of eternal life. He roams the earth on this quest and meets Utnapishtim, the only human granted eternal life by the gods. He tells Gilgamesh many stories, including one of a great flood that covered the Earth.

What happens to Gilgamest? Read the tale and find out. The following is an excerpt from Gilgamesh.

O man of Shuruppak, son of Ubartutu:
Tear down the house and build a boat!
Abandon wealth and seek living beings!
Spurn possessions and keep alive living beings!
Make all living beings go up into the boat.
The boat which you are to build,
its dimensions must measure equal to each other:
its length must correspond to its width.
Roof it over like the Apsu.
From Tablet XI — translation by Maureen Gallery Kovacs, 1998

A culture of many firsts, the Sumerians led the way for other societies that followed them.