The Babylonians used the innovations of the Sumerians, added to them, and built an empire that gave the world, among other things, codified laws, a tower that soared above the earth, and one of the Seven Wonders of the World.

Geographically, the empire of Babylonia occupied the middle and southern part of Mesopotamia. Situated between the Tigris and Euphrates Rivers, it stretched from the present-day city of Baghdad south to the Persian Gulf.

The late Babylonian Empire controlled the Fertile Crescent, including most of modern-day Iraq, Syria, Lebanon, and Israel.

The first written mention of Babylonia’s famous capital city, Babylon, dates to about 3800 B.C.E. During that time, most of Mesopotamia was made up of Sumerian city-states. The king of Babylonia Sargon I, however, was of Semitic background. During his reign, Semitic literature, art, and architecture flourished. He ruled from Susa and conquered lands as far away as Syria. 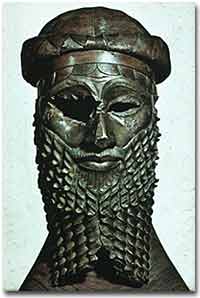 Sargon I, known as Sargon the Great, was a Semitic king who ruled the earliest Babylonian Empire.

Over the next 1,500 years, the Mesopotamia city-states vied with each other for power and influence. It was not until Hammurabi (ruled 1792-1750 B.C.E.) united most of this area after a triumphant military campaign that the city of Babylon reached its first great glory. In the years during and following Hammurabi’s reign (known as the First Empire), Babylonian rulers constructed temples, roads, and an extensive canal system. They also codified laws.

King Nabopolassar, a Chaldean, (Chaldea was a region of southern Mesopotamia), helped to conquer the Assyrian capital of Nineveh in 606 B.C.E. and used the opportunity to establish his own kingdom in Babylon.

Nabopolassar’s son, Nebuchadnezzar, succeeded his father in 604 B.C.E. During Nebuchadnezzar’s reign, the Tower of Babel reached its apex, the Hanging Gardens of Babylon were constructed, Babylonians destroyed the Great Temple in Jerusalem and 7,000 Jews were brought back to Babylonia in captivity. 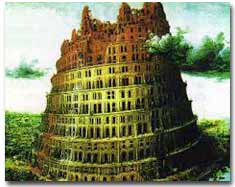 According to legend, the magnificent ziggurat known as the Tower of Babel needed constant maintenance to keep the baked bricks from eroding away in the rain. When King Xerxes of Persia took over Babylon in 478 B.C.E., the tower began its descent into history as a pile of debris and broken bricks on the ground.

The Tower of Babel

The Tower of Babel was a ziggurat, a pyramid-shaped temple built to a local god. The most important god of Babylon was Marduk, who outshone all other gods in the Babylonian pantheon.

Construction on the Tower of Babel had begun about 1100 B.C.E., and when Nebuchadnezzar finished it, the tower reached a height of 91 meters (295 feet). According to a tablet left by the king, the tower was made of “baked brick enameled in brilliant blue.”

Nebuchadnezzar built the Hanging Gardens of Babylon, one of the Seven Wonders of the World, for his wife who missed her lush homeland.

The gardens did not “hang” literally — that is, its plants or trees didn’t dangle from ropes. “Hanging” refers to the garden’s terraces which overhung one another.

But what makes a terraced garden special enough to be one of the Seven Wonders of the World?

Babylon received little rain, and stone slabs needed to hold terraces in place were almost nonexistent in the region. Ingenious engineers devised a chain pump that brought water from the nearby Euphrates River to irrigate the gardens. Specially designed bricks kept the flora in place.

The result was a green oasis that today’s scholars believe rose between 80 and 300 feet into the air. The gardens were a lush mountain of foliage in the middle of a flat, dry desert.

Ultimately, the Hanging Gardens of Babylon disappeared, and the Tower of Babel and the Babylonian Empire were destroyed by the Persians around the year 478 B.C.E. 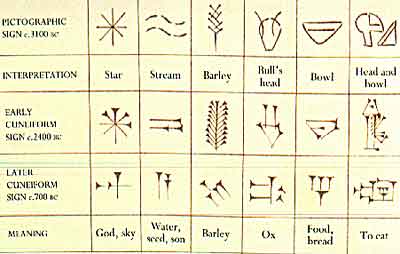 Babylonian language evolved from pictographs to cuneiforms throughout the life of the civilization.

But the sands of time cannot hide the magnificent accomplishments in engineering, law, art, and architecture that the Babylonians left as their legacy to the world.