4c. Hammurabi’s Code: An Eye for an Eye

4c. Hammurabi’s Code: An Eye for an Eye 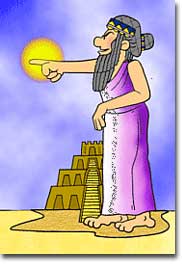 “Hammurabi, the king of righteousness, on whom Shamash has conferred the law, am I.”

This phrase, along with the idea of written laws, goes back to ancient Mesopotamian culture that prospered long before the Bible was written or the civilizations of the Greeks or Romans flowered.

“An eye for an eye …” is a paraphrase of Hammurabi’s Code, a collection of 282 laws inscribed on an upright stone pillar. The code was found by French archaeologists in 1901 while excavating the ancient city of Susa, which is in modern-day Iran.

Hammurabi is the best known and most celebrated of all Mesopotamian kings. He ruled the Babylonian Empire from 1792-50 B.C.E. Although he was concerned with keeping order in his kingdom, this was not his only reason for compiling the list of laws. When he began ruling the city-state of Babylon, he had control of no more than 50 square miles of territory. As he conquered other city-states and his empire grew, he saw the need to unify the various groups he controlled.

A Need for Justice

Hammurabi keenly understood that, to achieve this goal, he needed one universal set of laws for all of the diverse peoples he conquered. Therefore, he sent legal experts throughout his kingdom to gather existing laws. These laws were reviewed and some were changed or eliminated before compiling his final list of 282 laws. Despite what many people believe, this code of laws was not the first.

The oldest known evidence of a law code are tablets from the ancient city Ebla (Tell Mardikh in modern-day Syria). They date to about 2400 B.C.E. — approximately 600 years before Hammurabi put together his famous code.

The prologue or introduction to the list of laws is very enlightening. Here, Hammurabi states that he wants “to make justice visible in the land, to destroy the wicked person and the evil-doer, that the strong might not injure the weak.” The laws themselves support this compassionate claim, and protect widows, orphans and others from being harmed or exploited.

The phrase “an eye for an eye” represents what many people view as a harsh sense of justice based on revenge. But, the entire code is much more complex than that one phrase. The code distinguishes among punishments for wealthy or noble persons, lower-class persons or commoners, and slaves. 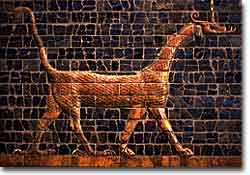 Don’t mess with the serpent-headed, scorpion-tailed mythical dragon of the god Marduk!

“Anu and Bel called by name me, Hammurabi, the exalted prince, who feared God, to bring about the rule of righteousness in the land, to destroy the wicked and the evil-doers; so that the strong should not harm the weak; so that I should rule over the black-headed people like Shamash, and enlighten the land, to further the well-being of mankind …”

So begins the Law Code of Hammurabi, a list of nearly 300 laws etched into a two and one-half meter high black diorite pillar, discovered in 1902 but dating back to the time of Hammurabi himself (1792-1750 B.C.E).
Some laws were quite brutal, others rather progressive. Members of the upper-class often received harsher punishments than commoners, and women had quite a few important rights.

Most of the nearly 300 laws written on the pillar pertain to property rights of landowners, slavemasters, merchants, and builders.

Here are some of the more unusual laws that seem very foreign to a modern society:

If any one finds runaway male or female slaves in the open country and bring them to their masters, the master of the slaves shall pay him two shekels of silver.

If any one is committing a robbery and is caught, then he shall be put to death.

If a tavern-keeper (feminine) does not accept corn according to gross weight in payment of a drink, but takes money, and the price of the drink is less than that of the corn, she shall be convicted and thrown into the water.

If a son of a paramour or a prostitute say to his adoptive father or mother: “You are not my father, or my mother,” his tongue shall be cut off.

If a son strike his father, his hands shall be hewn off.

If a man knock out the teeth of his equal, his teeth shall be knocked out.

If a man strike a free-born woman so that she lose her unborn child, he shall pay ten shekels for her loss.

If a barber, without the knowledge of his master, cut the sign of a slave on a slave not to be sold, the hands of this barber shall be cut off.

If a slave says to his master: “You are not my master,” if they convict him his master shall cut off his ear.

The code deals with many topics of concern other than assault. It outlines rules for witnesses and those making accusations of crimes. For example, “If any one bring an accusation of any crime before the elders, and does not prove what he has charged, he shall, if it be a capital offense charged, be put to death.” It details how theft or destruction of property should be handled and gives guidelines for dealing with trade and business problems.

In some cases, these rules are quite reasonable and fair: “If any one owe a debt for a loan, and a storm prostrates (kills) the grain, or the harvest fail, or the grain does not grow for lack of water, in that year he need not give his creditor any grain; he washes his debt-tablet in water and pays no rent for this year.”

The code also gives rules for family matters, such as marriage, divorce, incest, and adoption. Payment amounts for the work of doctors and other professionals are outlined. Although the pay for doctors was good, they suffered severe punishments for fatal errors. The code states that “if a physician make a large incision with the operating knife, and kill him, … his hands shall be cut off.” (Talk about a need for malpractice insurance!)

The Code covers all types of issues related to farming and herding animals, and it also lays out rules on the ownership and sale of slaves.

Go Jump in a River!

Hammurabi’s Code may not seem very different from more recent laws and precedents that guide the processes of a trial. But, there are a few major differences between ancient Babylonians and today’s laws. Hammurabi’s Code required accusers to bring the accused into court by themselves.

A number of the laws refer to jumping in the Euphrates River as a method of demonstrating one’s guilt or innocence. If the accused returned to shore safely, they were deemed innocent; if they drowned, they were guilty. This practice follows the Babylonians’s belief that their fates were controlled by their gods.

From the code, it is evident that the Babylonians did not believe all people were equal. The code treated slaves, commoners, and nobles differently. Women had a number of rights, including the ability to buy and sell property and to obtain a divorce. The Babylonians understood the need for honesty by all parties in a trial and for court officers to be free of corruption so that the justice system could function effectively.

Hammarabi’s Code serves as a window into the prevailing values of ancient Babylon.