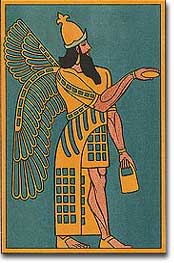 Although Assyrian is like most Middle Eastern languages, part of the Semitic language family, the Assyrian people are ethnically distinct from other members of this Semitic group.

Much of Assyria’s history is closely tied to its southern neighbor, Babylonia. The two Mesopotamian empires spoke similar languages and worshipped most of the same gods. They were often rivals on the battlefield for influence in the ancient Middle East.

The history of Assyria spans mainly from about 2000 B.C.E , when the cities of Nineveh and Calah were founded, to the destruction of Nineveh in 606 B.C.E.

Geographically, Assyria occupied the middle and northern part of Mesopotamia. It was situated between the Euphrates and Tigris Rivers, and its major cities were Calah, Zab, Ashur, and the capital, Nineveh.

The Power and the Gory 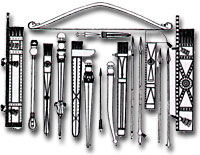 “I am powerful, I am all-powerful …. I am without equal among all kings.”

This was the boast of King Esarhaddon (680-669 B.C.E.), who expanded the Assyrian empire to its greatest extent. At the height of his great power, in 671 B.C.E., he conquered Egypt in less than a month.

The Egyptian kingdom was considered one of the most impenetrable in the Middle East. The Egyptians had ruled over their own land virtually undisturbed for 2,500 years.

Once Egypt was captured, Esarhaddon and his successor, Assurbanipal (680-626 B.C.E.), ruled an empire that stretched over 1,000 miles from the Nile River to the Caucasus Mountains. In its time, the Assyrian Empire was the greatest the world had ever seen. The center of the empire was located in what is now northern Iraq, and its capital was called Nineveh. 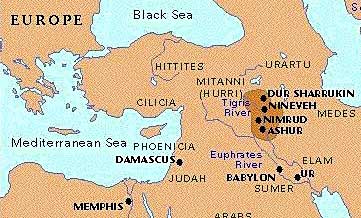 Few could stand in the way of the Assyrian expansion. After toppling the Babylonian Empire, the Assyrians conquered the Israelites, the Phoenicians, and even parts of the mighty Egyptian Empire.

Tiglath-pileser I was an early Assyrian king who began his reign in about 1100 B.C.E. He mounted several successful military campaigns against the Babylonians, Syrians, and many others.

He claims to have conquered 42 kings and peoples and wrote, “I carried away their possessions, burned their cities with fire, demanded from their hostages tribute and contributions, and laid on them the heavy yoke of my rule.”

The Assyrian ruler also claimed great expertise as a hunter who on one expedition killed over 900 lions and captured several elephants alive. 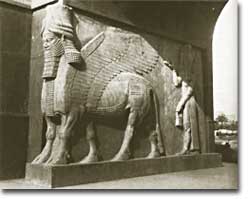 This guardian (notice the 5th leg) protected an Assyrian citadel gate in Khorsabad.

In the city of Asshur he kept a hunting park in which to prey on animals. At Nineveh, he started a botanical garden in which he planted trees and fauna gathered during his military campaigns.

How did the Assyrians establish such a large empire over such formidable foes? Their armies were highly trained and professional. And their troops had a great deal of experience in battle. They were well organized into various units of charioteers, cavalry, bowmen, and lancers.

Assyrian armies also had a corps of engineers who employed movable towers and iron-headed battering rams for sieges on walled towns.

Soldiers used iron weapons, which were much stronger than the bronze weapons of some of their foes. The Assyrians also built roads for the quick and easy movement of troops, so that conquered rebelling kingdoms could easily be brought back under control.

Fear was another tool used by the Assyrians. Although all wars are cruel, the Assyrians were notorious for their widespread use of torture. The words of an early Assyrian king, Assurnarsipal, reveal just how cruel the Assyrians could be:

The Spoils of Victory

In ancient times, kings usually led their troops into battle and were highly skilled soldiers themselves. It was the custom of Assyrian kings to record their victories on the walls of their immense and extravagant palaces. The relief sculptures on the walls of King Assurbanipal’s palace in Nineveh are some of the most elaborate. These sculptures, along with an important collection of cuneiform clay tablets — 25,000 of them — were discovered by Austen Henry Layard and his colleagues in the 1840s.

Empires meant power. This power led to extravagant wealth for the victors, who forced the conquered peoples into paying them tribute or taxes. The Assyrian kings had no end of such wealth.

The Assyrian king Sennacherib (704-681 B.C.E.) describes the tribute he exacted from the Hebrew king Hezekiah. Hezekiah withstood the Assyrians’ siege in the capital city of Jerusalem in an event that is also recounted in the Bible. But the Hebrews still had to give enormous tribute and presents to the Assyrians.

Sennacherib explains in his own words on a tablet that was discovered by archaeologists: “He sent [a convoy] after me to Nineveh, my royal city with 30 talents of gold, 800 talents of silver, jewels, antimony … couches of ivory, easy chairs inlaid with ivory, elephants’ hides, elephants’ tusks … all kinds of valuable treasures, and his daughters, his harem, and male and female singers.”

With the wealth they obtained from war and tribute, the Assyrian kings built the well-fortified and beautiful cities of Nineveh, Calah, (present-day Nimrud).

In these cities, they placed their grand palaces, some of which spanned several acres. It these places, Assyrian kings showed their more cultured side.

The first glassmaking, the invention of backgammon, the ancestor of the lock and key, even therapeutic massage, are thought by many scholars to be Assyrian inventions.

But the Assyrian Empire’s grandeur did not last. Just as it reached its peak, it began to crumble. Fighting between King Assurbanipal and his brother weakened the empire and opening it up to foreign invaders. The Assyrian Empire was eventually destroyed in 612 B.C.E. by the Medes from the Iranian Plateau and the Chaldeans of Babylonia.