The Phoenicians used cuneiform but later developed their own alphabet.

This famous sequence of letters known to much of the world dates back to the 16th century B.C.E.

A fairly small group of traders and merchants known as the Phoenicians created the foundation for the modern English alphabet and other alphabets. They organized a system of 22 consonants into what became the alphabet used not only by English speakers, but by speakers of many of the world’s languages.

The Phoenicians lived along the Mediterranean coast in what is now Lebanon. They inhabited a number of different city-states, the most famous of which were Tyre, Byblos, and Sidon. These Phoenician places were often in conflict with each other for domination of the region. Because of this lack of cooperation, the Phoenicians were conquered and forced to pay tribute to the virtually every empire in the region, including the Egyptians, Hittites, Assyrians, Babylonians, Persians, and Greeks.

When the Phoenicians created their new alphabet, they worked from symbols that were already in use among the Semitic-speaking peoples of Canaan and Mesopotamia. As early as 3000 B.C.E., the Sumerians and the Egyptians had already invented writing systems based on symbols. These early scripts were primarily used by merchants and traders to record contracts, receipts, and lists of goods.

The merchants and traders of Phoenicia wanted something that would not be too difficult to learn and would be quick and easy to use. Unfortunately, both the Egyptian and Sumerian writing systems did not meet these criteria very well. They used hundreds of different complex symbols to represent ideas (ideograms) and syllabic sounds (phonograms).

The Phoenicians realized that most words were made up of only a small number of simple sounds. They found that these sounds could be represented in only 22 symbols and their various combinations. In their newly created alphabet, the Phoenicians used symbols or letters only for consonants, although their spoken language did contain vowel sounds. The modern Hebrew and Arabic alphabets, which were directly influenced by the Phoenician one, still do not contain symbols for vowels.

From Ugaret to Malaga to Hadrumet, the trade-savvy Phoenicians influenced nearly every town along the coast of the Mediterranean Sea.

The Phoenicians spread their alphabet through their vast trading network that stretched throughout the entire Mediterranean region. The Greeks adopted it and by the 8th century B.C.E. had added vowels. Later, the Romans also used a version of this same alphabet that is virtually identical to the one used today in the English-speaking world.

Trading on the High Seas

The Phoenicians were the greatest traders in the ancient world for the period between 1000 B.C.E. and 600 B.C.E. These were highly skilled shipbuilders and sailors built strong and fast sailing vessels to carry their goods. They learned how to navigate and how to use the North Star to sail at night. It is possible that they even sailed as far as Britain and around the southern tip of Africa.

To fight off pirates who often harassed trading ships, the Phoenicians designed special warships to accompany their trading fleets. Oarsmen would propel a sharp ramming device at the front of the boat into an enemy’s vessel, putting a hole into it that would cause it to sink.

To expand in trading, the Phoenicians also built outposts that later became great cities in their own right. The most famous of these outposts was Carthage (located in modern-day Tunisia). Carthage eventually became wealthy and powerful enough to challenge the Roman Republic.

Phoenician merchants acted as middlemen for their neighbors. They transported linen and papyrus from Egypt, copper from Cyprus, embroidered cloth from Mesopotamia, spices from Arabia, and ivory, gold, and slaves from Africa to destinations throughout the Mediterranean. 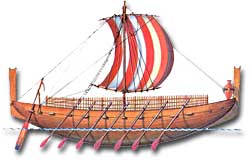 Given their location on the east coast of the Mediterranean Sea, it was natural for the Phoenicians to take to water. They are known as superlative ship builders of the ancient world.

The Phoenicians also had valuable resources and highly skilled artisans. From a small shellfish called the murex they produced a brilliant purple dye. This dye was applied to woolen garments, which were highly prized not only for their beauty, but also for their high cost. It took 60,000 murex to produce one pound of dye. The dye became known as royal purple and was worn by Roman emperors.

Skilled artists also produced beautiful glass, pottery, textiles, woodwork, and metalwork, that were desired by people all over the ancient world. King Solomon of Israel even used Phoenician artisans and resources to build the great Hebrew Temple to Yahweh.

By 572 B.C.E., the Phoenicians fell under the harsh rule of the Assyrians. They continued to trade, but encountered tough competition from Greece over trade routes. As the 4th century B.C.E. approached, the Phoenicians’ two most important cities, Sidon and Tyre, were destroyed by the Persians and Alexander the Great. Many Phoenicians left the Mediterranean coast for their trading colonies, and Phoenicia people and ideas were soon assimilated into other cultures.