4g. Hebrews and the Land of Milk and Honey

4g. Hebrews and the Land of Milk and Honey 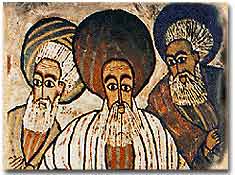 Abraham is regarded by Jews as the founder of the Hebrew people. The twelve tribes of Israel were direct descendants of Abraham.

Empires rose and empires fell. The Babylonians, the Assyrians, and the Persians accumulated immense wealth and power that allowed them to build capital cities of striking beauty.

But their cities and palaces eventually fell into decay and were covered by thousands of years of sand and dust.

One of their relatively powerless contemporary groups outlived those great empires. These people were the Hebrews, known also as Israelites or, later, Jews.

Their early contribution to humankind was not wealthy empires or groundbreaking technology. Rather, it was the revolutionary idea that there was only one god, a belief known as monotheism. This one Hebrew god was called Yahweh. To the Hebrews, Yahweh was all powerful and all knowing, yet beyond human understanding. The religion based around this god influenced the founding of Christianity and Islam.

Abraham and the Torah 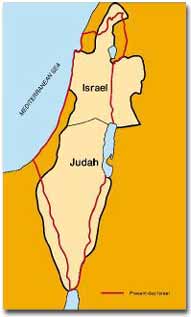 In the years after David and Solomon ruled, the kingdom of the Hebrews was divided into two separate lands, Israel and Judah.

The history of the early Hebrews is known primarily from one of their sacred texts, the Torah, which comprises the first five books of the Old Testament of the Bible. According to the Torah, Abraham is the ancestral patriarch of the Hebrew people.

Abraham was born in the Sumerian city of Ur. After Abraham’s father died, Yahweh visited Abraham and instructed him to smash the idols of his father’s gods, to worship the one and only true god, Yahweh, and to move his family to Canaan. Yahweh promised Abraham that if he followed these laws, he would found a great nation that would live in a land flowing with milk and honey.

This land, known as Canaan in ancient times, is roughly located in the same place as modern-day Israel.

Abraham’s migration took place some time between 2000 B.C.E. and 1700 B.C.E. It occurred at a time when the Canaanites lived in relatively small, independently governed, walled cities. They were accustomed to outsiders coming into their territory. The Hebrews, who were nomadic herders, were tolerated by the Canaanites.

The land that Abraham and his followers found did not flow so easily with milk and honey. The dry climate and rough environment required considerable effort to survive. Drought forced Abraham and his family to move to Egypt.

The Torah tells how Abraham had two sons: Isaac by his wife Sarah, and Ishmael by his concubine Hagar. The Hebrews trace their heritage through Isaac. Isaac had a son Jacob, who in turn had 12 sons. These sons became the leaders of the 12 tribes of Israel. Jacob’s most beloved son, Joseph, was sold into slavery by his jealous brothers. While in captivity, Joseph rose to be the Egyptian pharaoh’s chief minister of the land. 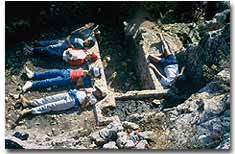 Jewish hikers lie down in this ancient tomb. The tomb was originally used to hold more than a single body, but over the centuries the roof caved in and exposed the burial place.

When a severe drought plagued Canaan, his same brothers came to Egypt, begging for grain. Ignoring their past mistreatment of him, Joseph gave them grain and convinced them to stay in Egypt.

There, the Hebrews prospered and became a great nation. They became so numerous, that a pharaoh “who did not know Joseph” enslaved the Hebrews. This pharaoh is believed to be Ramses II (1290-1224 B.C.E.)

The Exodus to Canaan

The Torah then recounts the story of Moses, who led the Hebrews out of Egypt and slavery. This event, known as the Exodus, most likely occurred during the reign of the pharaoh Merneptah, between 1224 and 1211 B.C.E. Archaeologists have found an Egyptian document written on papyrus from this time period that describes Jews being forced to leave, further authenticating this story. After what the Hebrews believed were a series of acts by Yahweh on their behalf, including various plagues on the Egyptians and their crops and livestock, Moses led his people out of Egypt. The Egyptian Exodus lasted approximately from 1600 to 1200 B.C.E.

Even in the modern world, Jewish children still learn to read the Torah according to ancient tradition. The Yemeni Jews here are practicing the Hebrew that they have learned from the village mari, or teacher.

According to the Old Testament, the Hebrews wandered in the desert of the Sinai Peninsula (which is between Egypt and Canaan) for 40 years. Moses received the Ten Commandments during this time, which outlined some basic laws governing behavior. He also struggled to keep his people from worshiping gods other than Yahweh. Moses died before he could enter Canaan.

Joshua led the Hebrews back into Canaan, where they settled among the Canaanites and the Philistines. The Old Testament tells of Joshua’s victorious battles against these people. Archaeologists have found that a number of towns were destroyed around this time. But, they do not agree as to whether such destruction was the work of the Hebrews or others. Over time, the Hebrews began to learn the ways of the Canaanites and settled down to a life of farming and herding.

In 722 B.C.E., the northern half of Hebrew lands known as Israel was invaded and mostly destroyed by the Assyrians. The southern half, known as Judea, survived until around 597 B.C.E., when the Babylonians defeated the Judeans and carried most of them back as captives to Babylon.

During their captivity in Babylon, Hebrew scribes recorded the history of their people and their relationship with their god Yahweh. After 539 B.C.E., the Persians under Cyrus II conquered Babylon. He allowed the Hebrews to return to their holy city of Jerusalem. But, the Hebrews continued to fall under the domination of other empires. In 70 C.E., the Romans destroyed Jerusalem and sent most of the Jews into an exile that lasted until the 20th century.