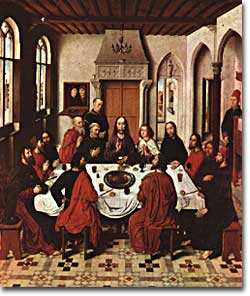 Despite the fact that no record exists of Jesus’ physical appearance, many paintings — all created after his death — depict his face. Here, Jesus (center) presides over the Last Supper.

Crucifixions were common in the Roman Empire. They were so common that the crucifixion of Jesus of Nazareth was noticed only by a small group of dedicated followers.

To understand the life and death of Jesus and the birth of Christianity, one must understand the context of the Roman Empire. Jesus was a Jew, as were almost all of his early followers. By 30 C.E., Rome’s empire had expanded to cover virtually all of the lands adjacent to the Mediterranean Sea, including the land occupied by the Hebrews.

The Romans had no tolerance for sedition or rebellion against their government. But the Jews had a religious reason for resisting Roman control. The Romans expected the Jews to worship the emperor as a god. But the Jews’ religion commanded them to worship only one god: Yahweh. Their refusal to worship any of the Roman emperors, infuriated those rulers. The emperors were used to getting their way, and they did not take the Jewish resistance lightly.

In 26 B.C.E., the Romans established direct rule over the Jews. They appointed Pontius Pilate as governor of the territory in that year. Pontius Pilate had little tolerance for Jewish traditions. More than once, he pushed the Jews to the brink of revolt by violating their religious beliefs in their holy city of Jerusalem. He even took money from their holy temple’s treasury to build an aqueduct. This action led to a suppressed rebellion that resulted in many Jewish deaths.

According to Hebrew texts, it was believed that humans’ time on earth was temporary. It was to be replaced by God’s triumph over all human sins and the establishment of God’s everlasting kingdom. They believed that this apocalypse, or end to the earthly world, would be brought about by a messiah. Many Jews were awaiting this messiah to deliver them from Roman rule and their earthly burdens. For some, this messiah was Jesus of Nazareth. 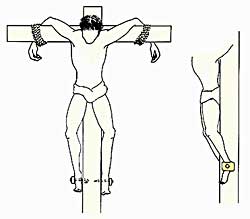 Jesus’ death came at the hands of a grisly ancient method of execution known as crucifixion. During a crucifixion, the sentenced is nailed and/or tied to a cross made of wood. This diagram shows a man tied at the arms with metal spikes through his ankles.

Jesus began to teach in the Jewish tradition. He preached love and tolerance, and he was also believed to have performed miracles of healing the sick, walking on water, and even raising the dead.

Jesus claimed that the kingdom of Yahweh would never be realized on earth, but in a life after death. Jesus taught to love even enemies, because in light of the coming kingdom of God, there was no reason for hatred. A small group of disciples believed he was the promised messiah who would bring an end to Roman rule.

Jesus’ ideas were rejected by most of the Jews in Galilee, an area in northern Israel, where he first preached his ideas. Many Jews believed that Jesus was a troublemaker who was violating Yahweh’s sacredness. He chose to go to Jerusalem to spread his word some time between 30 and 33 C.E.

For much of his life, Paul was known as “Saul” and was a dedicated persecutor of Christians. But following his conversion to Christianity, he began extensive traveling and preaching.

Gaining followers in Jerusalem was not easy for Jesus. Not all Jews saw their religion or their relationship with the Romans in the same way. In fact, some of the high priests of the Jewish Temple supported the Romans. The high priest was appointed by Pontius Pilate to control Jewish affairs and to keep the Jewish population in line. It is argued by some historians that the priests received wealth and power for their cooperation with the Romans.

Jesus decided to target these priests and their control of the Temple of Yahweh. It is believed that he saw them obstructing the conversion of the Jewish populace to his ideas. He coordinated an attack on the trading activities of the Temple, which were a great source of wealth to the priests.

At the very least, this gave the Roman authorities the excuse they needed to arrest Jesus for sedition. On the night of the Passover Seder, known to Christians as the Last Supper, Jesus was arrested. Jesus had been hiding, and Judas of Iscariot, one of his disciples, told Roman authorities where he would be.

Crucifixion and the Growth of Christianity

Jesus was brought before Pontius Pilate, who was uncertain how to proceed. Jesus’ disciples were only a small minority, and the crowds demanded crucifixion. Pilate condemned Jesus to death. He was beaten and crucified.

Three days after his death, Jesus’ tomb was found empty. For the next 40 days, his disciples claim that they saw visions of Jesus having risen from the dead in the tradition of Moses and other great Jewish prophets. The resurrection story is central to the Christian beliefs of the divinity of Jesus and life after death.

Most Jews rejected the notion of Jesus as their messiah. In the years that followed Jesus’ death, the Romans treated the early Christians as a small, Jewish sect. This all changed with Paul of Tarsus.

Paul began to spread Christianity ideas more to non-Jews. Many of the poor, destitute people in the region took solace in the notions of a loving god and a life after death. The Romans persecuted these Christians who rejected Roman polytheism. But Paul traveled far and wide, and his successors did a remarkable job reaching converts. After almost four centuries of existing on the margins, Christianity became the state religion of the Roman Empire in 395 C.E.