Thanks to existing Greek sculptures and texts, we know how people dressed in ancient Greece. The peplos, worn by the woman in the statue above, was the universal garment for Greek women until the 6th century B.C.E.

Many of the fundamental elements of Western culture first arose more than 2000 years ago in ancient Greece.

After conquering the Greeks, the ancient Romans spread Greek ideas throughout their empire, which included much of Europe.

After the fall of the Roman Empire, these ideas lost their prominence in European society during most of the Middle Ages (500-1500 C.E.). It was not until the Renaissance (1350-1500 C.E.) that the ancient Greek and Roman origins of many European institutions and practices were rediscovered.

One prominent element of Greek thought was the concept that humans are the measure of all things. The ancient Greeks wanted to know how the universe works. To probe such questions, the Greeks turned to philosophy, mathematics, and science. 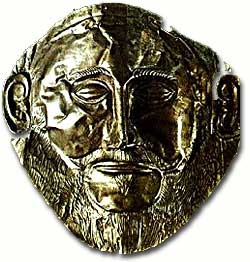 This gold burial mask is known famously as the Mask of Agamemnon, the heroic king of Mycenae in Homer’s Iliad. Though mystery still surrounds the 16th century B.C.E. Minoan and Mycenaean cultures, archaeologists have found fascinating artifacts, including frescoes, palaces, tombs, and other burial masks.

The glorification of the human form and of human accomplishment defined ancient Greek art, philosophy, literature, and religion. Even their gods were created in the image of humans. The Greek gods had human emotions, looked like humans, and behaved more like people than infallible gods.

The Greeks’ emphasis on the individual is one major cornerstone of Western Civilization. Indeed, the spirit of individualism as defined by the Greeks is still alive and well in modern American culture and society.

The Greeks were the first in the West to experiment with the concept of democratic government. Many successful modern democratic governments in the world today are heirs to the Greek model. It must be pointed out that though the Greeks developed the notion of “government by the people,” most people were still excluded from the political process.

Two major groups of people, the Minoans and the Mycenaeans, were the first to populate the Greek peninsula. Not much is known about either of these groups because they did not leave an abundance of written or physical evidence to provide clues about their civilization. However, it is known that by 1650 B.C.E., the Minoans occupied the island of Crete that is south of the Greek mainland. The Minoans were named for the legendary ruler of Crete, King Minos. Historians believe that the Minoans were seafaring traders who developed a rich, diverse culture.

The Mycenaeans came from a group of people who migrated from India through the Middle East and into Greece around the year 2000 B.C.E. These Indo-Europeans mixed with the native population of Greece to become the Mycenaeans. Over time, both the Minoans and Mycenaeans expanded and conquered territory until the two civilizations ran into one another.

Historians suspect that in the ensuing conflict the Mycenaeans wiped out the Minoans, whose civilization and culture disappeared somewhat mysteriously. By 1200 B.C.E., the Mycenaeans were in turn wiped out by another group known as the Dorians. This ushered in a Dark Age that lasted from 1150 to 800 B.C.E. During this time, economic activity ground to a halt, and literacy disappeared. Not much is known about this period in Greek history.

But a highly developed civilization resurfaced. From politics and philosophy to art, medicine, and science, the ancient Greeks generated thoughts that shaped the record of humankind for the next 2,500 years.