5a. Rise of City-States: Athens and Sparta

5a. Rise of City-States: Athens and Sparta 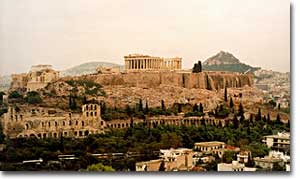 The Acropolis played an integral role in Athenian life. This hilltop not only housed the famous Parthenon, but it also included temples, theaters, and other public buildings that enhanced Athenian culture.

Geography plays a critical role in shaping civilizations, and this is particularly true of ancient Greece.

The Greek peninsula has two distinctive geographic features that influenced the development of Greek society. First, Greece has easy access to water. The land contains countless scattered islands, deep harbors, and a network of small rivers. This easy access to water meant that the Greek people might naturally become explorers and traders.

Second, Greece’s mountainous terrain led to the development of the polis (city-state), beginning about 750 B.C.E. The high mountains made it very difficult for people to travel or communicate. Therefore, each polis developed independently and, often, very differently from one another. Eventually, the polis became the structure by which people organized themselves. Athens and Sparta are two good examples of city-states that contrasted greatly with each other. 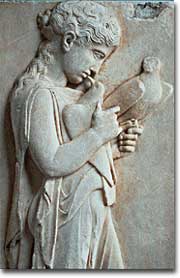 Life was not easy for Athenian women. They did not enjoy the same rights or privileges as males, being nearly as low as slaves in the social system.

The city-state of Athens was the birthplace of many significant ideas. Ancient Athenians were a thoughtful people who enjoyed the systematic study of subjects such as science, philosophy, and history, to name a few.

Athenians placed a heavy emphasis on the arts, architecture, and literature. The Athenians built thousands of temples and statues that embodied their understanding of beauty. Today the term “classical” is used to describe their enduring style of art and architecture.

Athenians also enjoyed a democratic form of government in which some of the people shared power.

Life in Sparta was vastly different from life in Athens. Located in the southern part of Greece on the Peloponnisos peninsula, the city-state of Sparta developed a militaristic society ruled by two kings and an oligarchy, or small group that exercised political control. 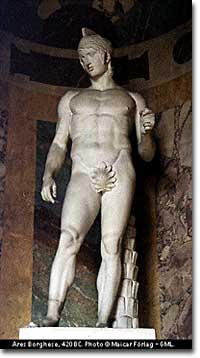 Ares, the Greek god of war, was a particularly fitting patron for Sparta, which was known to be a rather warlike society. When they weren’t fighting another city-state, Spartans were honing their military skills in preparation for the next battle.

Early in their history, a violent and bloody slave revolt caused the Spartans to change their society. A Spartan, Lycurgus, drafted a harsh set of laws that required total dedication to the state from its people. The laws’ goal was to train citizens to become hardened soldiers so that they could fight off potential enemies or slave revolts. The result was a rigid lifestyle unlike any seen in Greece at the time. The devotion of Spartans to developing a military state left little time for the arts or literature.

A Spartan baby had to be hardy and healthy. To test a baby’s strength, parents would leave their child on a mountain overnight to see if it could survive on its own until the next morning. By age seven, Spartan boys were taken from their families and underwent severe military training. They wore uniforms at all times, ate small meals of bland foods, exercised barefoot to toughen their feet, and were punished severely for disobedient behavior. Boys lived away from their families in barracks until the age of 30, even after they were married. Men were expected to be ready to serve in the army until they were 60 years old.

Women, too, were expected to be loyal and dedicated to the state. Like men, women followed a strict exercise program and contributed actively to Spartan society. Although they were not allowed to vote, Spartan women typically had more rights and independence than women in other Greek city-states.

The differences between Athens and Sparta eventually led to war between the two city-states. Known as the Peloponnesian War (431-404 B.C.E.), both Sparta and Athens gathered allies and fought on and off for decades because no single city-state was strong enough to conquer the others.

With war came famine, plague, death, and misfortune. But war cannot kill ideas. Despite the eventual military surrender of Athens, Athenian thought spread throughout the region. After temporary setbacks, these notions only became more widely accepted and developed with the passing centuries.