5b. Democracy Is Born

5b. Democracy Is Born 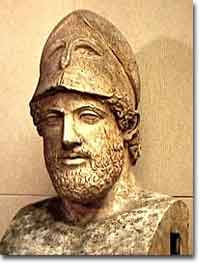 Pericles was such a great, influential ruler of Athens that the period of history during his reign has been dubbed the Age of Pericles.

The men wearing red paint were in big trouble.

In fact, they would probably have to pay a fine for not appearing at the assembly meeting. After being caught shirking their duty as citizens of Athens, they had been marked with red paint as punishment.

Not everyone in Athens was considered a citizen. Only free, adult men enjoyed the rights and responsibility of citizenship. Only about 20 percent of the population of Athens were citizens. Women were not citizens and therefore could not vote or have any say in the political process. They were rarely permitted out in public and were even restricted as to where they could be within their own homes. Slaves and foreigners were not citizens and also could not participate in the democracy. In the end, democracy existed only for the free men who were originally from Athens. 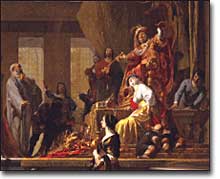 Croesus shows his treasures to Solon in this 17th-century painting. Solon has been called one of the Seven Wise Men of Greece.

Nevertheless, the idea of democratic government is one of the most significant contributions of the ancient Greeks. The city-state of Athens had one of the largest democracies in terms of population.

In English, the word “solon” means “a wise and skillful lawgiver.” enacted reforms that helped reduce the growing gap between the rich and the poor. Poor citizens gained the right to sit in the assembly and to vote.

Later, Cleisthenes expanded the democracy by giving every citizen equal rights. He also created a legislative body whose members were picked randomly from the general population of citizens. 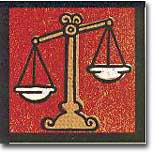 Under the tyrant Draco, justice in ancient Athens was pretty harsh. Although he was the first person to write down the laws of Athens, according to Plutarch, Draco, “wrote his laws in blood, not ink.”

Typically, the citizens of Athens would gather in the agora when there was an assembly meeting. The agora, a fixture of every major Greek city-state, was a large open space in the middle of the city-state that contained a marketplace as well as government buildings. There, citizens would mingle and discuss the issues of the day before gathering for the assembly meeting.

During the meeting, citizens were free to express their opinions and cast their votes. It was in these meeting that people could be marked with red paint if they were not fulfilling their civic duty.

The courts, too, were usually in the agora. The juries in court cases were very large, often numbering in the hundreds and sometimes in the thousands. To be fair, Athenians wanted their juries to reflect the general population. There were no lawyers. Each citizen was expected to make his own case.

Athenian democracy depended on every citizen fulfilling his role. All citizens were expected to vote, but they were also expected to serve in the government if necessary. In Athens, the people governed, and the majority ruled. All citizens had equal rights and powers.

In a city-state as small as Athens, a pure democracy was possible. As states grew larger, the notion of electing representatives to make decisions for the public became more practical. But the idea that every citizen has a voice important enough to be heard originated in ancient Athens.