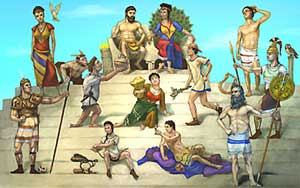 A family portrait of the 12 Olympians. But wait, who’s that crouching by Zeus?

The ancients Greeks were polytheistic — that is, they worshipped many gods. Their major gods and goddesses lived at the top of Mount Olympus, the highest mountain in Greece, and myths described their lives and actions. In myths, gods often actively intervened in the day-to-day lives of humans. Myths were used to help explain the unknown and sometimes teach a lesson.

For example, Zeus, the king of the gods, carried his favorite weapon, the thunderbolt. When it rained and there was thunder and lightning, the ancient Greeks believed that Zeus was venting his anger.

Many stories about how the Greek gods behaved and interacted with humans are found in the works of Homer. He created two epic poems: the Iliad, which related the events of the Trojan War, and the Odyssey, which detailed the travels of the hero Odysseus. These two poems were passed down orally over many generations. 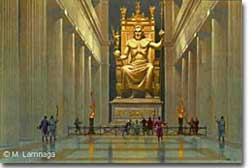 The Statue of Zeus at Olympia (recreated above) was one of the Seven Wonders of the Ancient World. Zeus was the ruler of the gods, the lord of the skies, and the father of countless deities and demigods of the Greek pantheon.

Aphrodite, the goddess of love, sits with the war god, Ares in this painting by the Renaissance artist Botticelli. Aphrodite is one of several Greek goddesses, and is often referred to by her Roman name, Venus.

hurled in their multitudes to the house of Hades strong souls
of heroes, but gave their bodies to be the delicate feasting
of dogs, of all birds, and the will of Zeus was accomplished
since that time when first there stood in division of conflict
Atreus’ son the lord of men and brilliant Achilleus.Homer, the Iliad (1951, translation by Richard Lattimore)

A Soap Opera from Hellas 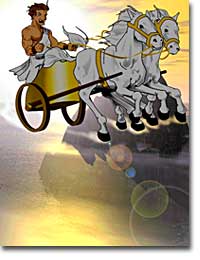 Many Greek myths explained the mysteries of nature. The myth of Apollo, for example, describes how the sun moves across the sky to rise and set each day.

The Greeks created gods in the image of humans; that is, their gods had many human qualities even though they were gods. The gods constantly fought among themselves, behaved irrationally and unfairly, and were often jealous of each other. Zeus, the king of the gods, was rarely faithful to his wife Hera. Hera plotted against Zeus and punished his mistresses.

The Greek gods were highly emotional and behaved inconsistently and sometimes immorally. Greek religion did not have a standard set of morals, there were no Judaic Ten Commandments. The gods, heroes, and humans of Greek mythology were flawed.

In addition to Zeus and Hera, there were many other major and minor gods in the Greek religion. At her birth, Athena, the goddess of wisdom, sprang directly from the head of Zeus. Hermes, who had winged feet, was the messenger of the gods and could fly anywhere with great speed. Aphrodite, the goddess of love, was the most beautiful being in the universe. Her brother, Ares, the god of war, was sinister, mean, and disliked. Poseidon, ruled the sea from his underwater place and Apollo rode his chariot across the sky, bringing the sun with him.

Typically, the gods punished those who were bad. For example, Tantalus who killed his own son and served him to the gods for dinner was sent to Hades and made forever thirsty and hungry. Although there was a pool of clear, fresh drinking water at his feet, whenever Tantalus bent down to drink, the pool would dry up and disappear.

Likewise, over his head hung the most delicious fruit. However, whenever Tantalus reached for them, a wind would blow them just out of his reach. The English word “tantalize” derives from the name Tantalus.

Myths helped explain how the world came to be the way it was. In one myth, Zeus created an incredibly beautiful and nearly perfect woman named Pandora. Her one flaw was that she was very curious and suspicious. Hermes, Zeus’s messenger, gave Pandora a golden box. He warned her never to open it because terrible things would occur if she did.

But Pandora could hardly contain her curiosity and eventually broke down and opened the special box. Out from the box flew all the evils that plague humanity: famine, greed, pain, sorrow, etc. Only one thing remained in the box — hope — which humans managed to hold on to. This myth explains the origins of human misfortune. At the same time, it teaches a moral lesson by warning of the dangers of curiosity.

In addition to myths about gods, the ancient Greeks also told stories about heroes. One of the most famous Greek heroes was Hercules, the world’s strongest man. Hercules was the illegitimate son of a mortal woman and Zeus, who tricked the woman by disguising himself as the woman’s husband. Hera, Zeus’s wife, was angry about Zeus’ affair and sought to punish Hercules. Hera tricked Hercules into believing that his entire family were dangerous beasts, which Hercules then proceeded to kill. When Hercules realized that he had killed his entire family, he agreed to perform 12 tasks to atone for his terrible actions. For one of the tasks, Hercules had to slay the nine-headed monster called the Hydra.

For another task, he had to clean the filth from Augean stable, which had not been attended to in 30 years. To do this, Hercules diverted the course of a river that washed away the mess. In the end, he completed the so-called 12 Labors of Hercules and made up for the murder of his family.