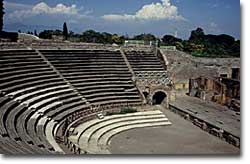 Greek theaters were built into the sides of hills. This not only provided excellent seating arrangements, but remarkable acoustics as well.

Thousands would come from far and wide to see the opening of the latest drama by Aeschylus, the most famous of Athenian playwrights. The citizens of Athens felt it was a part of their civic duty to attend as many dramas as possible.

The dramas typically dealt with important issues of the day, posed tough questions, and educated theatergoers. Attendance at dramas was considered such a valuable experience that sometimes the government would pay for the tickets.

Among the earliest Greek literature was Homer’s epic poems, the Iliad and the Odyssey. The Iliad is a detailed telling of the Trojan War while the Odyssey recounts Odysseus’ 20-year journey home following the Trojan War.

Created as early as 900 B.C.E., Homer’s poems were not written down since Greek civilization lacked a written language at that time. Instead, these massive poems were passed down from generation to generation by word of mouth. 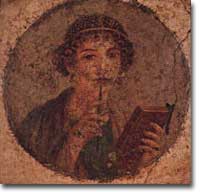 Immortalized on the walls of the Roman city, Pompeii, the Greek poet Sappho has been highly regarded for centuries. Some people consider Sappho to be the first modern poet. Rather than writing epic poetry of heroic deeds, she wrote short, very personal pieces about love and loss.
An Excerpt from the “Iliad”The passage which follows is from Book XXII of the Iliad. It describes a scene from the Trojan War that occurs just before Achilles, the Greek warrior, slays the Trojan hero, Hector.

Old King Priam was the first to see Achilles rushing towards the Trojans over the fields. As Achilles ran, the bronze on his breast flashed out like the star that comes to us in autumn, outshining all its fellows in the evening sky — they call it Orion’s Dog, and though it is the brightest of all the stars it bodes no good, bringing much fever, as it does, to us poor wretches. The old man gave a groan. He lifted up his hands and beat his head with them. In a voice full of terror he shouted entreaties to his beloved son, who had taken his stand in front of the gates in the fixed resolve to fight it out with Achilles.

“Hector!” the old man called, stretching out his arms to him in piteous appeal. “I beg you, my dear son, not to stand up to that man alone and unsupported. You are courting defeat and death at his hands. He is far stronger than you, and he is savage. The dogs and vultures would soon be feeding on his corpse (and what a load would be lifted from my heart!) if the gods loved him as little as I do — the man who has robbed me of so many splendid sons, killed them or sold them off as slaves to the distant isles. So come inside the walls, my child, to be the savior of Troy and the Trojans; and do not throw away your dear life to give a triumph to the son of Peleus. Have pity too on me, your poor father, who is still able to feel.

As he came to an end, Priam plucked at his gray locks and tore the hair from his head; but he failed to shake Hector’s resolution. And now his mother in her turn began to wail and weep. “Hector, my child,” she cried, “deal with your enemy from within the walls and do not go out to meet that man in single combat. He is a savage; and you need not think that, if he kills you, I shall lay you on a bier and weep for you, my own, my darling boy; nor will your richly dowered wife; but far away from both of us, beside the Argive ships, you will be eaten by the nimble dogs.” 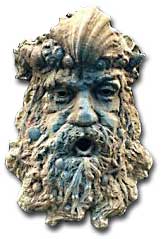 Another poet, Hesiod, wrote the Theogony around 700 B.C.E. The Theogony is a genealogy of the gods. Some scholars credit Hesiod with being one of the first to actually write down his work.

Around the same time of Hesiod, there was another growing group of writers known as the Lyric poets. One of the most famous of the Lyric poets was Sappho. Sappho wrote about the world around her and focused particularly on the themes of love and sexuality. Sappho, who was bisexual, frequently wrote about her homosexual love affairs. The ancient Greeks were completely tolerant of homosexuality and did not discriminate. The word “lesbian” comes from the name of Sappho’s island of birth, Lesbos. 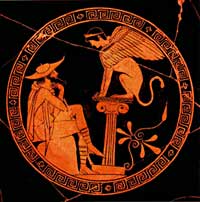 In Sophocles’ great play Oedipus Rex, Oedipus must solve the Sphinx’s riddle in order to save the city of Thebes.
“To Aphrodite” by SapphoYou know the place: then

Leave Crete and come to us
waiting where the grove is

sacred to you; incense
smokes on the altar, cold
streams murmur through the
apple branches, a young
rose thicket shades the ground

down deep sleep; in meadows
where horses have grown sleek

The Age of Pericles

The years between 461 to 429 B.C.E. marked the Age of Pericles. Named after an Athenian leader, arts and literature flourished in this era. Outdoor theaters were built in Athens and other city-states for performances of the latest dramas. Made of stone, the theaters were positioned so that scenes of natural beauty served as backdrops for the stage.

For example, the Greek theater at Taormina in Sicily is built high upon a rocky hill. Behind the audience’s back lay the blue waters of the Mediterranean Sea. Perfectly centered behind the stage and facing the audience, sits the active, smoldering volcano, Mount Etna.

The Greeks held drama festivals in which plays competed against one another for the audience’s favor. During these festivals, the Greeks performed the plays as a tribute to the gods. The first major drama festival of the spring in Athens honored Dionysus, the god of grapes and wine. This festival celebrated the renewal of the grape vines.

On stage, actors could play several roles by wearing different masks A chorus of several people in the background chanted from time to time, serving as a kind of narrator, and helping move the plot along.

All three of the most famous ancient Greek writers specialized in tragedies. Tragedy is a form of drama in which a strong central character or hero ultimately fails and is punished by the gods. Usually, the hero has a fatal flaw that causes his undoing.

For many years, Aeschylus (525-456 B.C.E.) was the most successful dramatist in Athens winning several competitions. One of his rivals, the Athenian writer Sophocles (496-406 B.C.E.), wrote the famous play Oedipus Rex, (Oedipus the King). In this play, the main character, Oedipus is fated by the gods to kill his father and marry his own mother. Despite Oedipus’s efforts to avoid this outcome, it happens just as the gods predicted. In shame, Oedipus blinds himself and is then banished.

A third major writer named Euripides (484-406 B.C.E.) focused more on people than gods in his writing. Among Euripides most famous works are Electra and The Trojan Women

An Excerpt from “Medea” by Euripides

In this tragic story, Medea has been deserted by her husband, Jason, who has left to marry the daughter of King Creon. In revenge, Medea ultimately kills the two children she and Jason share and then herself.

The chorus enters. The following lines between the Nurse, Chorus, and Medea are sung.

Another type of play was the comedy. The most significant writer of comedies in ancient Greece was Aristophanes, whose works included The Frogs and The Clouds.

An Excerpt from “The Frogs”

Enter Dionysus on foot dressed in the skin of the Nemean Lion, and the club of Heracles in his hand, and Xanthias heavily laden on a donkey.

His plays were witty and sarcastic. More often than not, comedies poked fun and made light of the major political figures of the day. Fortunately, the government of Athens tolerated this style of criticism.