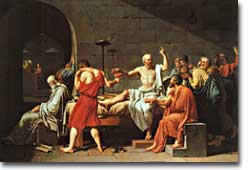 The Metropolitan Museum of Art in New York.

This painting, The Death of Socrates, by the 18th-century artist, David, portrays the famous story of Socrates’ death. He was convicted of religious heresy and contamination of the youth and died by drinking hemlock after the people of Athens turned against him.

The citizens of Athens were fed up with the old “wise” man.

Socrates, one of ancient Greece’s most learned philosophers, found himself on trial for his teachings. The prosecution accused Socrates of corrupting the youth of Athens. A jury of hundreds found Socrates guilty and sentenced him to death.

At the age of 70, Socrates willingly drank hemlock, a powerful poison that put an end to his controversial life. How did it happen that Athenians put to death a great philosopher such as Socrates? 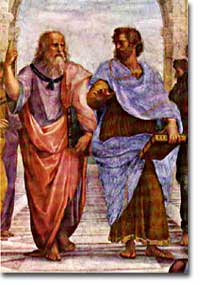 In the Renaissance artist, Raphael’s School of Athens, Plato (shown on the left) argues that one should search for truth from above, while his pupil Aristotle argues that answers can be found through observation on Earth.

Throughout his entire life, Socrates questioned everything from Athenian government to Greek religion and the gods themselves. His ultimate goal was finding the truth, which he believed could be reached through reason and knowledge. Socrates was a teacher, but he did not have a classroom, any books, or even a school. Instead, Socrates lectured publicly. Anyone interested in what he had to say was invited to listen.

Socrates practiced a style of teaching that has since become known as the Socratic method. Essentially, Socrates taught through questioning. He started with simple questions, then progressed to more complex, deeper questions. Through the application of reason and logic, Socrates revealed answers to many questions that led to a greater understanding of the world.

Problems arose because Socrates often questioned the very fundamentals and traditions of Greek society. His constant questioning and searching for the truth were seen as dangerous by many and ultimately led to his death.

Plato, a student of Socrates, also achieved greatness as a philosopher. Unlike Socrates, however, Plato chose to write his ideas down. In one of his most renowned works, The Republic, Plato outlined his vision of the ideal state. 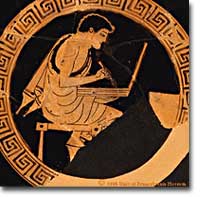 Greek philosophers were quite prolific, and left behind many wonderful dialogues on life, morality, death, and religion.

Surprisingly, Plato’s republic was not very democratic. Plato was greatly disturbed at the way the mass of Athenians had agreed to put to death his brilliant teacher and mentor, Socrates. Plato believed that uneducated people should not have right to make important decisions for everyone.

Instead, Plato envisioned a society with many classes in which each class contributed what it could. In his ideal society, farmers grew the food for the republic, soldiers defended the republic, and a class of intelligent, educated philosophers ruled the republic. Not surprisingly, Plato lived at a time when democratic society in Athens was in decline.

Such then, I said, are our principles of theology –some tales are to be told, and others are not to be told to our disciples from their youth upwards, if we mean them to honour the gods and their parents, and to value friendship with one another.

Yes; and I think that our principles are right, he said.

Certainly not, he said.

And can he be fearless of death, or will he choose death in battle rather than defeat and slavery, who believes the world below to be real and terrible?

Then we must assume a control over the narrators of this class of tales as well as over the others, and beg them not simply to but rather to commend the world below, intimating to them that their descriptions are untrue, and will do harm to our future warriors.

That will be our duty, he said.

Then, I said, we shall have to obliterate many obnoxious passages, beginning with the verses…Plato, “The Republic,” (360 B.C.E.), Book III excerpt, translated by Benjamin Jowett

One of Plato’s students, Aristotle, also distinguished himself as a thinker. Aristotle wrote about and studied many subjects, including biology, physics, metaphysics, literature, ethics, logic, art, and more. He emphasized the importance of observation and the gathering of data.

Although Aristotle made important discoveries in many areas, his explanation concerning the movement of heavenly bodies was wrong. Aristotle believed that the Earth was the center of the universe, and that all heavenly bodies revolved around the Earth. This makes sense from a strictly observational standpoint. Looking up at the sky, it looked to Aristotle like everything (sun, moon, stars) circled the earth. In this case, Aristotle’s reliance on observation led him astray. In reality, the Earth revolves on its own axis, causing the illusion of it being the center of everything.

A Golden Age of Thought

Besides the three great philosophers described above, ancient Greece produced many other important thinkers. In the realm of science, Hippocrates applied logic to the field of medicine and collected information on hundreds of patients. His work helped advance people’s understanding of the causes of disease and death and swayed people from believing in supernatural reasons.

Greek thinkers applied logic to mathematics as well. Pythagoras deduced multiplication tables as well as the Pythagorean theorem relating to right triangles. Euclid revolutionized the field of geometry, and Archimedes worked with the force of gravity and invented an early form of calculus.

In the realm of the social sciences, Herodotus, is often credited with being the first modern historian. Another historian, Thucydides, tried to be as objective as possible in reporting the history he recorded.

Many of these advancements and revelations seem obvious by today’s standards. But 2,500 years ago, most humans were concerned with providing food and protection for their families and little else. Most of them were ruled by kings or pharaohs who had supreme decision-making power. The Athenian democracy encouraged countless innovative thoughts among its citizens.

To the ancient Greeks, thinking was serious business.