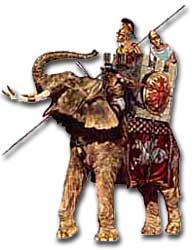 Alexander the Great was so impressed by the Indian use of elephants in battle, that he immediately enlisted them into his army. Elephants were particularly effective against horses, which would often bolt away in fear at the presence of the enormous beasts.

Was Alexander the Great really great?

A great conqueror, in 13 short years he amassed the largest empire in the entire ancient world — an empire that covered 3,000 miles. And he did this without the benefit of modern technology and weaponry. In his day, troop movements were primarily on foot, and communications were face to face. Not bad for a kid who became the King of Macedon at the age of 20.

Many of Alexander’s accomplishments were made possible by his father, Philip of Macedon. Macedon, which existed roughly where the modern country of Macedonia lies today, was a kingdom located that lay geographically north of the Greek city-states.

Alexander’s the Great’s tutor was the Greek philosopher Aristotle.

Philip’s next goal was to defeat Greece’s age-old enemy to the east: Persia. For years, the massive Persian Empire threatened the very existence of the Greek way of life. But before he was able to pursue his second goal, Philip was assassinated. 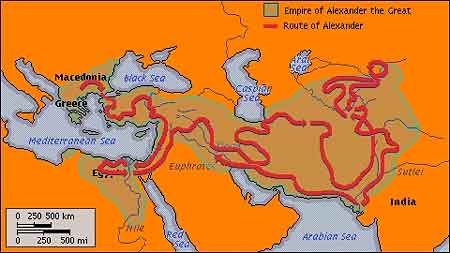 This map shows Alexander the Great’s massive empire and the route he took to conquer it.

When his son, Alexander, took the throne in 336 B.C.E., he vowed to complete the plans of his father. In 334 B.C.E., Alexander invaded Persia, which lay across the Aegean Sea in Asia Minor (modern-day Turkey).

After three grueling years of warfare and three decisive battles, Alexander smashed the Persian armies at the Tigris River and conquered the mighty Persian Empire, including the legendary city of Babylon. For many Greeks, this victory marked a moment of sweet revenge against a bitter foe. 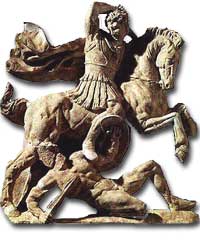 Alexander was an amazing soldier who led his army to conquer much of the known world.

At this point, at the age of 25, Alexander ruled an expansive empire. Nevertheless, his ambitions were not satisfied. While fighting the Persians, Alexander conquered Egypt and founded a city at the mouth of the Nile River. This city, which he named Alexandria after himself, became a cosmopolitan, diverse, bustling center of trade, the arts, and ideas.

But Alexander was not done. He continued his campaign, driving farther east, until he reached India and the Indus River in 326 B.C.E. At this point, his exhausted troops refused to fight further. They told Alexander that a truly great leader knows when it is time to stop fighting.

Without the support of his army, Alexander had no choice but to turn back and begin consolidating and organizing his far-flung empire. On his way home, Alexander died from disease in 323 B.C.E. 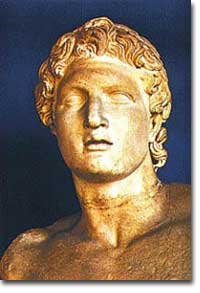 Though he was an unquestionably skilled and highly respected military leader, Alexander the Great was feared by those around him for his paranoia and dangerous temper.

Alexander the Great’s legacy is both far reaching and profound. First, his father was able to unite the Greek city-states, and Alexander destroyed the Persian Empire forever. More importantly, Alexander’s conquests spread Greek culture, also known as Hellenism, across his empire.

In fact, Alexander’s reign marked the beginning of a new era known as the Hellenistic Age because of the powerful influence that Greek culture had on other people. Without Alexander’s ambition, Greek ideas and culture might well have remained confined to Greece.

Many historians see Alexander the Great in a different light. Although Alexander was both intelligent and handsome, he also had a darker side. He possessed a ferocious temper and from time to time would arbitrarily murder close advisors and even friends. Also, toward the end of his many campaigns, he senselessly slaughtered thousands whose only crime was being in his way.

Was Alexander the Great really great?