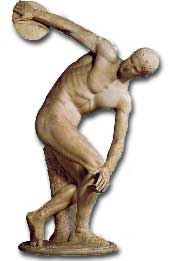 Myron’s Discobolos (Discus Thrower) shows the Greek emphasis on the beauty of the human form.

The ancient Greeks loved competition of all sorts. Each year, the various city-states of Greece sent athletes to festivals of games, which were held to honor the gods.

The most important and prestigious were the games held at Olympia to honor Zeus, the king of the gods. These Olympic games took place in the summer only once every four years.

The earliest recorded Olympics occurred in 776 B.C.E. It is very likely, however, that Olympic games took place for hundreds of years before then.

The last ancient games were held in 394 C.E. Then the Romans, who had conquered the Greeks, outlawed them. The modern Olympic games began in 1896. 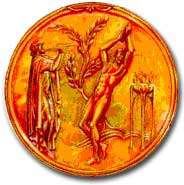 The discus was one of the original events in the ancient Olympic games. Each thrower used the same discus for the competition — a copper one which was kept in Olympia.

In the beginning, the participants in the Olympic games were all men. Women were not allowed to compete or even to watch.

Over time, the Greeks held a festival of games to honor the goddess Hera, Zeus’s wife. Only unmarried women could participate in the competitions, which consisted mainly of foot races. Eventually, women were able to participate in and attend the Olympic games.

Contestants could compete in many different events. Athletes were completely naked and covered in oil as they competed. First, there were the four types of running events. Distances covered include 192 meters (the length of the stadium), 384 meters and a long-distance run of anywhere between 1,344 and 4,608 meters.

Wrestling in the ancient Olympics was an honorable, but extremely difficult sport in which to compete. In addition to have no weight classes (the bigger the better!) there was no stopping the match until one man could be declared triakter (victor).

In the most demanding event runners raced between 384-768 meters — in an armor outfit that weighed between 50 and 70 pounds!

Then, there were the combative events, boxing and wrestling. Boxers wrapped their hands in leather and metal, making the contests brutal and bloody. The object in wrestling was to touch the opponent’s shoulders to the ground. All these skills were considered important for military training.

Next, there were the equestrian events, which involved horses and sometimes chariots and took place in a separate arena called the hippodrome.

Finally, there was the most prestigious and important of all events: the pentathlon, a combination of five different events. Each contestant threw the javelin, did the long jump, wrestled, ran a foot race, and threw the discus. The person who had the best overall effort in all these five events was declared the winner.

At the Olympics, the winners received wreaths made of olive leaves. Over time, more and more prizes were added such as a bronze tripod or olive oil. Winners received even greater rewards when they returned to their home city-states. 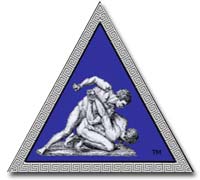 In the Olympic event of the pankration — a brutal mix of boxing and wrestling with almost no rules — the combatants literally fought tooth and nail.

Triumphant athletes were given not only large monetary awards, but also free meals for the rest of their lives. The citizens and leaders of the city-state took great pride in their athletes and publicized their accomplishments far and wide.

During the Olympics, leaders from the various city-states discussed important political and economic matters. In the ancient world, major leaders rarely met the same place at the same time. As the games approached, everyone generally agreed to an Olympic truce, a time when warfare usually ceased. Athletes and spectators were granted immunity to travel to and from the games.

In 2004, the Summer Games will return to their original birthplace of Athens, Greece.