Julius Caesar’s military might, political savvy, and diplomatic genius made him supremely popular among the Roman citizenry.

The first conspirator greeted Caesar, then plunged a knife into his neck. Other stabbers followed suit. One by one, several members of the Senate took turns stabbing Julius Caesar (100-44 B.C.E.), the dictator of the entire Roman Empire.

Stunned that even his good friend Brutus was in on the plot, Caesar choked out his final words: “‘kai su, teknon?” (“You too, my child?”).

On the steps of the Senate, the most powerful man in the ancient world died in a pool of his own blood. 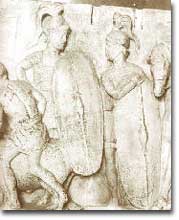 Roman soldiers’ appearance changed very little over the centuries. The army of Julius Caesar looked very similar to the soldiers in this 2nd-century B.C.E. carving.

In William Shakespeare’s play Julius Caesar, the title character manages to utter “Et tu, Brute?” (“and you, Brutus?”) as he is slain. This is not historically accurate.

According to the 1st century C.E. Roman historian Suetonius, Julius Caesar spoke mainly Greek and not Latin, as was the case with most patricians at the time. In his history about the life of Julius Caesar, Suetonius writes that as the assassins plunged their daggers into the dictator, Caesar saw Brutus and spoke the Greek phrase kai su, teknon, meaning “you too, my child.”

There is still debate whether or not it was shouted in shock or said as a warning. On one hand, Caesar may have been amazed to find a close friend like Brutus trying to kill him; on the other hand, he may have meant that Brutus would pay for his crime in the future for this treachery. Either way, the words were Greek, so leave “Et tu, Brute” for Shakespeare.

Long before Julius Caesar became dictator (from 47-44 B.C.E.) and was subsequently murdered, the Roman Republic had entered a state of rapid decline. The rich had become wealthier and more powerful as a result of Rome’s many military successes.

Meanwhile, life for the average Roman seemed to be getting worse. Attempts to reform the situation by two brothers, Tiberius and Gaius Gracchus, were met with opposition that eventually resulted in their deaths.

Julius Caesar led his Roman legions as far north as Britain in 55 B.C.E. He and his army may have seen this view upon landing at Deal Beach.

In addition, slavery was on the rise, and violent slave revolts were commonplace. 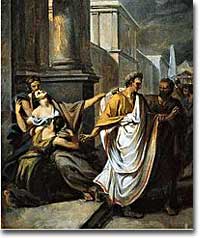 In this 19th-century painting by Abel de Pujol, Caesar leaves his wife on the Ides of March, the day of his murder.

Spartacus (109-71 B.C.E.) was a captured soldier who was sold into slavery to be a gladiator. But he escaped his captors and formed an army of rebel slaves. Against great odds, Spartacus’s slave army defeated two Roman battalions.

Spartacus wanted to leave Italy, but his army and supporters of the slave revolt urged him to attack Rome. A Roman army led by Crassus finally defeated Spartacus and his men.

Over 5,000 men from Spartacus’s army were crucified along Rome’s main road, the Appian Way, as a warning to other slaves not to revolt.

Finally, a new practice developed in which the army was paid with gold and land. Soldiers no longer fought for the good of the Republic but fought instead for tangible rewards. Gradually, soldiers became more loyal to the generals who could pay them than to the Roman Republic itself. It was within this changing atmosphere that military leaders such as Julius Caesar were able to seize control of and put an end to the Roman Republic.

Julius Caesar was a man of many talents. Born into the patrician class, Caesar was intelligent, educated, and cultivated. An excellent speaker, he possessed a sharp sense of humor, charm, and personality. All of these traits combined helped make him a skilled politician.

Moreover, Caesar was a military genius. His many successful military campaigns gained him broad support and popularity among the common people. Caesar also won the undying loyalty of his soldiers, who supplied him with the necessary muscle to seize power.

Julius Caesar began his rise to power in 60 B.C.E. by forging an alliance with another general, Pompey, and a wealthy patrician, Crassus. Together, these three men assumed control of the Roman Republic, and Caesar was thrust into the position of consul. Historians have since dubbed the period of rule by these three men the First Triumvirate.

Over time, however, the triumvirate broke down. Crassus was killed in battle, and Pompey began entertaining ideas of ruling without the dangerously popular Caesar. While Caesar was fighting in Gaul (modern-day France), Pompey and the Senate ordered Caesar to return to Rome without his army. But when Caesar crossed the Rubicon River in northern Italy, he brought his army with him in defiance of the senate’s order. This fateful decision led to a civil war. Caesar defeated Pompey’s forces and entered Rome in 46 B.C.E., triumphant and unchallenged.

Upon his return, Caesar made himself dictator and absolute ruler of Rome and its territories. During his rule, he enacted several reforms. Caesar founded many colonies in newly conquered territories and provided land and opportunity for poor Romans who chose to migrate there. He reduced the number of slaves and opened citizenship up to people living in the provinces. Finally, he created a new calendar named the Julian calendar. This very calendar, with a few minor adjustments, is the same one used around the world today.

In 44 B.C.E., Julius Caesar ordered the Senate to make him dictator for life. Typically, dictators served for a limited time (usually six months), then stepped down. Caesar’s actions threatened to end the Republic once and for all. Fearing this change, a group of senators plotted and executed the murder of Caesar on the Ides of March. Although the senators succeeded in ending Caesar’s life, they did not realize at that time that the Republic had died with him.

Rome would now become an empire.