6d. Life of the People

6d. Life of the People

The quality of life in the Roman Empire depended upon where one fell within society.

During the Pax Romana, the wealthy built huge, lavishly decorated houses and usually had servants or slaves to tend to their every need. The average citizen worked hard and lived reasonably comfortably in modest housing. Despite the riches of the Roman Empire, the largest class lived in what can only be described as poverty. 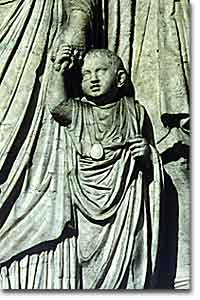 Roman children wore pendants called bullas, from the Latin word for “bubble,” around their necks. The wealthy wore bullas made of gold, while a typical plebeian bulla was leather.

Roman family life was a patriarchy — that is, the oldest male wielded considerable power over the rest of the family. The patriarch made all of the major decisions for the family. He had the power to divorce his wife or even kill her if she committed adultery.

Likewise, the patriarch had the right to kill his own children. In fact, the patriarch routinely decided if a newborn baby would survive and be raised by the family. Depending on how many children the family already had and the sex of the child, the patriarch might choose to have the baby killed. Infanticide was a widespread problem in the Empire, especially among female babies.

The wife of the patriarch was expected to manage the household and to remain loyal and obedient to her husband. Women could not hold political office, but in later years of the Empire women gained more rights, such as the right to own property.

A 19th-century French artist captures the Roman feast in his painting “The Romans of the Decadence.”

The Roman diet revolved around three Mediterranean staples: grain, grapes, and olives. Everyone in the Italian peninsula ate these foods daily. The grain (mainly wheat) was used to make bread, the grapes to make wine, and the olives to make olive oil. Bread made up the majority of many meals, especially for the poor. Wine was served with almost every meal and was often mixed with water to reduce the effect of the alcohol. Olive oil provided an important source of fat.

The rich ate whatever they wanted. Their tastes leaned toward the exotic. The more unusual the food seemed, the better. They ate jellyfish, peacock, ostrich, pork, and fungus, to name just a few of their favorites. The wealthy held huge banquets that lasted all day. When guests became full, they sometimes purged themselves so that they could continue eating.

The diet of the poor relied on bread, vegetables such as cabbage, and porridge. The poor met their protein needs by eating some meat (usually pork) and cheese.

Sports were a favorite activity of ancient Romans. This fresco depicts Roman women playing with a kind of medicine ball called a paganica and even dumbbells.

Although the toga is the item of clothing most associated with Roman culture, not all Romans could wear it. Only citizens were allowed to wear togas. As togas were status markers, citizens wore them with pride, even though they were not very comfortable. The toga consisted of a very large (18 feet by 6 feet) rectangular or semicircular piece of wool cloth that was carefully draped and wrapped around the body. A properly wrapped toga required no buttons, pins, clasps, or any other fastening device.

The average citizen wore a white toga, but a person in a position of importance wore a toga with a purple stripe whose appearance varied according to the significance of the person’s position. The emperor’s toga was completely purple.

The basic item of clothing for an unmarried women was a tunic. Depending on the design of the garment it was called either a peplos or chiton. Married women wore a garment called a stola. 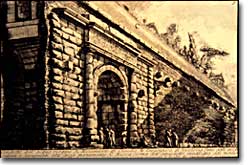 This aqueduct, the Aqua Virgo, was built in 19 B.C.E. to supply water to the baths near the Pantheon.

Togas are no longer popular attire — except at frat parties — but some Roman practices have endured to this day. Going to a club for a workout and a sweat in the sauna, for example, was originally a Roman idea. Romans like to go to the public baths. The baths were places where men and women (separately) could go to socialize, exercise, read, and relax, as well as get clean.

A typical trip to the public baths was quite an event. It might begin with some exercise in the gymnasium, followed by a trip to a warm room, where an attendant would rub oil all over the visitor’s body.

Next came a visit to the tepidarium, where another attendant scraped the oil, dirt, and sweat off the body with a metal tool. When clean, the Romans took a swim in the actual baths, which included both hot water pools and cold water pools. The waters of the public baths were continuously refreshed by aqueducts and heated by underground furnaces.

Finally, drinking special mineral waters alleged to have healing powers completed a visit to the baths.

During the entire experience, visitors to the baths interacted with fellow citizens. This social function may have been the most important purpose of the baths.