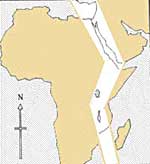 Africa’s Great Rift Valley is the largest landform on Earth, and the only one visible from the moon. It was here our earliest ancestors evolved.

Upon Africa’s soils our prehistoric relatives have walked side by side. From its territories, great civilizations have risen to glory. Through its peoples, astounding cultures have grown and flourished. Yet many myths remain about Africa.

Why is such an important place so stigmatized and misunderstood?

Many factors have contributed over time to the degradation of Africa and its peoples. Stories and pictures in the news, the legacies of European colonialism and the slave trade, and attitudes conjured up through racial dissention within America have all distorted modern perceptions of the African continent and its people. But one of the biggest reasons for the perpetuation of negative ideas and misinterpretations is the simple neglect or avoidance of the continent’s ancient history. 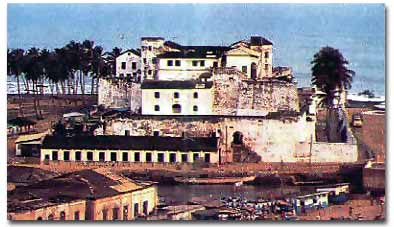 This is Sao Jorge da Mina, a 17th-century Portuguese and Dutch fort in Ghana, as it looks today. Influence of European colonization in Africa is still felt both culturally and linguistically.

For years, educators have either bypassed Africa altogether, or pointed to prehistoric, colonial, and present times. However, times have changed, and of course, continue to change. Every day new discoveries are made about Africa and new artifacts are displayed to enrich the community through their historic and cultural value. The lack of serious and positive attention that has been given to Africa’s ancient and medieval civilizations makes them even more important and exciting to study today. They are treasures that should not be hidden from the world.

So what were these civilizations all about and why are they so important? From the beginnings of the Common Era to the period of European imperialism, worlds of great empires, royal courts, pastoral nomads, tribal chiefs, stone palaces, intricate art, and glorious gold emerged, collapsed, and intertwined. Powerful states were built from small towns and villages and a great network of regional and overseas trade was established. Wars were waged, territories were seized, kings became rich, and Islam was spread across the continent. 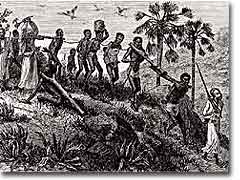 West African slaves were marched to the coast for transport. An estimated 10 to 12 million West Africans were sold into slavery for the Americas and another 12 to 20 million were sent east to Arab lands.

These kingdoms or cultural groups have unique traits, but similar patterns can be found in the development and decline of each. The resources, locations, economies, governments, and social divisions that heightened each society are linked to a common foundation. And the repeated patterns that are evident in the kingdoms’ downfalls make it clear that the movement from stateless to state societies is often a very difficult transition.

As few written records exist for reference, the entire story of early Africa is difficult to unravel. But, through clues that range from art to oral accounts, a remarkably complete picture of its early landscape has already been drawn. Together, the tales of the successive reigns of the Ghana, Mali, and Benin kingdoms, the invasions of the Bedouin nomads, and the mysterious rocky ruins of Great Zimbabwe close the gap between the missing pieces and bring much of Africa’s cultural heritage closer to light.