The word “Zimbabwe” is thought to be derived from a Shona phrase meaning “stone enclosure” or “house of rock.”

The House of Rock.

It’s not the name of a dance club or a new band. It’s actually a translation of the Shona word, “Zimbabwe.” Though not the best illustration of the modern African nation, this phrase is a perfect description of the ancient city within its borders known as Great Zimbabwe. Sixty acres of immense stone ruins comprise the city and tell the story of the people who created and resided in it some 900 years ago.

For a long time, many Westerners argued that such amazing structures could not have been crafted in Africa without European influence or assistance. These notions reflect ethnocentrism, or the tendency to view one’s own culture as the best and others as inferior. With the help of modern dating techniques, today’s archaeologists have been able to disprove these arguments and expose the truth. Africans, and Africans alone, were responsible for building this astounding and complex city.

The first inhabitants of Great Zimbabwe were Shona-speaking peoples who likely settled in the region as early as 400 C.E. Back then, the land was full of possibilities: plains of fertile soil to support farming and herding, and mineral rich territories to provide gold, iron, copper, and tin for trading and crafting. It was fine place for the Shona to call home.

Over the years, descendants of the Shona made transitions from simple farming communities to more complex, stratified societies. By 1000 C.E., the population of Great Zimbabwe was divided and ranked by status — from elite leaders and their cattle to the peasants who did all the work. Cattle were very desirable and actually more valuable than most of the workers.

Lifestyles of the Rich and Famous

In response to the changing social, political, and economic landscape, new buildings were gradually built. Tremendous stone houses were constructed by the peasants for their kings. Sophisticated workplaces were designed for conducting trades such as blacksmithing.

The buildings were made of heavy granite blocks, stacked tightly together. Stones were arranged carefully, and no mortar was used to seal them together. The largest and most impressive building was an elliptical structure known today as the Great or Western Enclosure. The remains of its outer wall measure over 800 feet long and up to 32 feet high. The wall enclosed several huts and a tall, cone-shaped tower. Archaeologists and anthropologists believe that the enclosure was the city’s center and was occupied only by the elite. It was the dividing line between the rich and the rest.

Several clues led to this theory. First, remnants of exotic items from overseas were found within the enclosure. Second, no evidence of cooking was found within the walled area. Most likely, this means that food was prepared elsewhere by servants and delivered to the wealthy inhabitants upon demand. And third, evidence of only 100-200 residents is shown, while many thousands occupied the city.

Where did everyone else live? They lived in mud huts surrounding the enclosure. Although the huts were not quite as glamorous as the granite “palaces,” they were well constructed.

By 1200 C.E., the city had grown strong, and was well known as an important religious and trading center. Some believe that religion triggered the city’s rise to power, and that the tall tower was used for worship. The people of Great Zimbabwe most likely worshipped Mwari, the supreme god in the Shona religion. 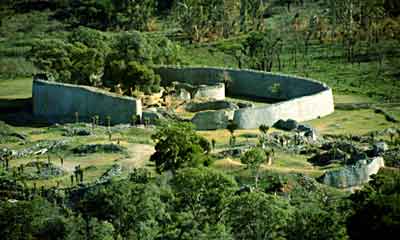 Long looted by treasure hunters, thrill-seekers, and lay archaeologists, it has been only in past two decades that the ruins of the stone city of Great Zimbabwe have begun to reveal their secrets of past African culture and history.

Discoveries of Chinese porcelain, engraved glass from the Middle East, and metal ornaments from West Africa provide evidence that Great Zimbabwe participated in a comprehensive trade network during the 13th and 14th centuries. Gold was probably its chief export and East African cities — especially those along the coast that had overseas connections — were most likely its primary trading partners.

Zimbabwe’s prosperity continued until the mid-15th century. At this time, the city’s trade activity declined and the people began to migrate elsewhere. The exact cause of the evacuation remains a puzzle, but many scientists agree that a decline in soil quality and fertility was probably a major factor. The Kingdom of Great Zimbabwe has declined, but the House of Rock still stands.